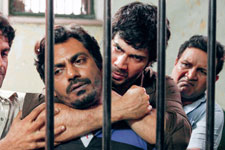 Nupur Barua / fullhyd.com
EDITOR RATING
7.0
Performances
Script
Music/Soundtrack
Visuals
8.0
7.0
6.0
6.0
Suggestions
Can watch again
Yes
Good for kids
No
Good for dates
Yes
Wait to rent it
No
Sriram Raghavan hit gold with his debut, Ek Hasina Thi. Johnny Gaddaar and Agent Vinod had their bright moments, especially the former, and the director is rumoured to be working on the film adaptation of a Vikas Swarup whodunit. Which is why Badlapur, which people did not know of till the promos hit YouTube, is an unexpected surprise from the man who is considered somewhat of a neo-noir expert in the Indian film industry. And the fact that he casts a commercial heartthrob in the lead is enough to garner curiosity. Needless to add, this, too, is a neo-noir film, and that, as he has clearly established, is Raghavan's turf.

Two men rob a bank and discover that their getaway vehicle, a motorbike, is no longer available, unless they call attention to themselves. They are forced to kidnap a mother and her young son in the former's car, and find themselves being chased by the cops. One of the men manages to escape, and the other, Laik (Nawazuddin Siddiqui), is caught and arrested. Laik insists that he is just the driver, and the mastermind, whose name he claims not to know, has run away with the money.

The cops cannot find the missing partner, but because the incident has taken the lives of innocent victims, Laik is sentenced to 20 years in prison. Raghav (Varun Dhawan), whose wife and son were in the car, does not believe Laik's innocence, even as his entire life is turned upside down. Not willing to live in the same city that brought him so much happiness, Raghav finds himself in an industrial town, Badlapur, where he decides to wait for Laik's release, to solve the mystery of the events that led to the irreversible tragedy in his life.

In a twist of fate, Raghav is approached after some years by Shobha (Divya Dutta), whose NGO rehabilitates prisoners. She wants Raghav to sign a pardon letter that will let the very ill Laik live out the rest of his life a free man. Raghav, however, has only one aim - to figure out the name of the mysterious partner who disappeared with all the money. But Laik is still ambiguous about him.

Neo-noir demands that you leave your moral righteousness behind and put yourself in the shoes of the protagonist, who typically indulges in behaviour that may border on the sociopathic. In Badlapur, Raghav forces himself on women and tortures normal people because he is stuck, as Shobha points out, in his own mental prison. He does not make excuses for his behaviour, because he believes he is justified in becoming bitter and violent. He does not care, at all, about the consequences that his actions may have on anybody. He is unapologetic about using people who trust him, and about lying. He becomes the perfect man to hate, except that the writer wants you to understand him.

And you do. You sympathise with his situation, and you may flinch at his vulgarity, but you forgive him anyway. It is unlikely that he will reform, and you are fine with that. He has suffered, and even if his conduct is unbecoming and immature, you take a step back and hope that you are never in the position that he has been placed in. After all, a man wronged should be given a chance to teach the culprit a lesson. What about the wrongdoer, however?

Therein lies a paradox. The cockier Laik becomes, the more you warm towards him. You know what his crime is, but with each passing sequence, you find yourself sympathising with him, too, even when you are still rooting for Raghav. This dichotomy in your mind is possible only because of the honest writing in the script. This is not very different from Sriram Raghavan's first movie, in which you understood the protagonist's unorthodox thirst for revenge, but you also hoped nothing would harm the villain. In Badlapur, too, you become desperate to be the moderator between these two extremes, and you wish you could sort out the differences between the protagonist and antagonist. That is how involved you become with the screenplay and the way that it pans out. It is a revenge drama, but even as you follow the protagonist's journey, you begin to wonder if avenging oneself is worth it in the end. As Laik points out, he panicked and committed a heinous crime - it was a mistake - but Raghav's obsession with crime is more dangerous. It is a disease that needs treatment. Or is it?

Dark comedy is an integral part of the script, and of the dialogues. Look out for the sequence in which the inmates of the prison watch Sholay, and Laik takes particular inspiration from Gabbar Singh's prison sentence in that movie. So much so that he becomes famous for his failed attempts of prison-breaking.

The narration spans 15 years, with some flashbacks going back to even earlier, but it is never melodramatic. The basic problem, however, lies in the paper-thin story. It stretches endlessly, because nothing much happens in those 15 years. The genius of Raghavan lies in keeping you hooked to a narrative that is largely stagnant. The first half is gripping, but the second is tedious, especially when the director incorporates some sentimental and self-explanatory dialogues towards the end.

Varun Dhawan has to age 15 years and more in this movie, and he does a pretty decent job of transforming himself from a chirpy young man to a bitter middle-aged one. However, since his intonation does not change at all with the age in his character, he does not look too persuasive. In fact, he looks the most convincing when he does not speak much, and when he has to carry out despicable acts in the name of revenge. His eyes can go from friendly to cold with ease, and it proves that the young actor has the calibre to experiment with unconventional roles. He just needs to work on his voice.

Nawazuddin Siddiqui is terrific. Period. This movie belongs to him. You have to watch the movie to understand, if you do not already, just how superior an actor this man is. Kumud Mishra has some brilliant moments, too, as the police officer. Divya Dutta is understated, and Huma Qureshi does her bit with some sincerity. Yaami Gautam is hardly there, so she does not make much of an impact. Radhika Apte, on the other hand, is dynamite in her role as an unsuspecting wife. Vinay Pathak is underused.

You cannot really differentiate between the Pune of 15 years ago and the Pune of now. The production design does not try too hard to make this a period drama, and that may be deliberate. You are anyway so engrossed in the film that you may not really care about the fact that there are inconsistencies in street set-ups (cars etc.), and even in costumes (some of the outfits are pretty weird, to say the least).

The music is not as haunting as it was in the director's first movie, but the incorporation of some nostalgia in the soundtrack helps to set the mood (which is, of course, dark). The camera-work is non-intrusive and sometimes gritty, and the editing could have been much more crisp and effective to make this film a brilliant one. There are too many pauses, and that is where it fares poorly when compared with Ek Hasina Thi.

Comparisons with Ek Hasina Thi are inevitable, because that movie made us believe that Raghavan had what it took to make movies worth watching. Badlapur is no Ek Hasina Thi, and the lack of twists and turns may have something to do with it. However, it is a film worth watching, at least once, if only for Nawazuddin Siddiqui, who never ceases to amaze. And also for the total involvement of the audience with the characters - that is something that requires talent, and that Sriram Raghavan definitely has.
Share. Save. Connect.
Tweet
BADHLAPUR SNAPSHOT 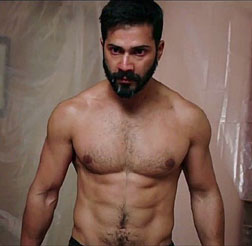 ADVERTISEMENT
This page was tagged for
Badhlapur hindi movie
Badhlapur reviews
release date
Varun Dhawan, Nawazuddin Siddiqui
theatres list
Follow @fullhyderabad
Follow fullhyd.com on
About Hyderabad
The Hyderabad Community
Improve fullhyd.com
More
Our Other Local Guides
Our other sites
© Copyright 1999-2009 LRR Technologies (Hyderabad), Pvt Ltd. All rights reserved. fullhyd, fullhyderabad, Welcome To The Neighbourhood are trademarks of LRR Technologies (Hyderabad) Pvt Ltd. The textual, graphic, audio and audiovisual material in this site is protected by copyright law. You may not copy, distribute, or use this material except as necessary for your personal, non-commercial use. Any trademarks are the properties of their respective owners. More on Hyderabad, India. Jobs in Hyderabad.