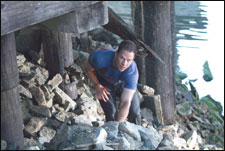 The combination is deadly enough to make Swagger a poor man’s Bourne. I hate to say this, but despite the obvious screen presence of Mark Wahlberg, and some right-wing hokum about justice is blind etc., Shooter is just another shallow action film with incidental espionage thriller bits thrown in. In the post 24 world, a movie with its politics so muddled can’t hope to be taken seriously.

Starting at the beginning, we have our eponymous shooter, Bob Lee Swagger (Wahlberg) – and notice how desperately manly the name sounds – a highly trained marine sharpshooter, who gives up his job after a mission in Ethiopia goes haywire and his partner dies. Also notice how like every ‘90s B-action movie, it has to start with a mission that goes horribly wrong.

Speaking of ‘90s action flicks, there is a lot of throwback to them. Just like another one of those – Commando, if you must know – he retires in a lone cottage in the hills, only to be contacted by the government for “one last mission”. Military guy Colonel Isaac Johnson (Danny Glover) tells him about a planned attempt on the US President’s life. He has to take a look at the places that the President will appear at, and pin-point probable hiding areas.

Needless to say, Swagger is set up to be the fall guy for another assassination while he is on the job, he takes a few bullets, and after a brief interlude where the old friend’s widow (Kate Mara) nurses him back in her underwear, he somehow enlists the help of disgraced FBI officer Nick Memphis (Michael Pena), and busts this thing wide open.

Swagger is the new Rambo (see, the ‘90s movie references refuse to die), shooting bad guys, meting out his own brand of justice, and being a man pained by his past in general. While the action is ultra sleek, and plenty, it is the convoluted plot and the gaping holes in the script as well as its supposed politics that leave it wanting.

This is a perfect plot if you want to make a no-holds-barred enjoyable, if forgettable, bad-ass shooter film, but if you want to add dense layers of political intrigue, and rope in the genocide in Africa for good measure, I’m afraid the writing would have to be better than this. Atrociously poorly written, the film gets bogged down by its own needless ballast.

This is the sort of role that needs more grimacing than actual acting, but Wahlberg still manages to do a decent job as the wronged, even if morally incorrect, Swagger, but it is the surprisingly layered performance of Pena that deserves mention. Pena plays his character as a dogged yet humble everyman, determined to do his job, and do it well.

The rest of the cast is okay by action movie standards, as this was not intended to be just an action flick anyway. The word ‘patriot’, and its various forms, get brandished about a lot in the film, along with a lot of plot points that allude to the film being with a lot of dense structuring and political message mongering. But the truth is that the film is as shallow as they come. This is a film that makes up some political mumbo jumbo, and some weird theory about the whole conspiracy just so it can get to the next action sequence.

Fuqua delivers a violent, edgy actioner, but cannot mask the incapability of Jonathan Lemkin’s banal screenplay. If you don’t mind the bad plot and the worse posturing in the film, you can actually have some fun in the shoot-outs delivered at an even pace. However, despite his best effort, Wahlberg does not make a good Bourne. Yet.

ADVERTISEMENT
This page was tagged for
Shooter english movie
Shooter reviews
release date
Mark Wahlberg, Michael Peña
theatres list
Follow @fullhyderabad
Follow fullhyd.com on
About Hyderabad
The Hyderabad Community
Improve fullhyd.com
More
Our Other Local Guides
Our other sites
© Copyright 1999-2009 LRR Technologies (Hyderabad), Pvt Ltd. All rights reserved. fullhyd, fullhyderabad, Welcome To The Neighbourhood are trademarks of LRR Technologies (Hyderabad) Pvt Ltd. The textual, graphic, audio and audiovisual material in this site is protected by copyright law. You may not copy, distribute, or use this material except as necessary for your personal, non-commercial use. Any trademarks are the properties of their respective owners. More on Hyderabad, India. Jobs in Hyderabad.