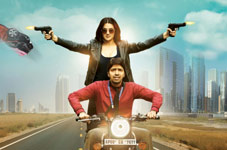 Josh / fullhyd.com
EDITOR RATING
4.5
Performances
Script
Music/Soundtrack
Visuals
6.0
4.0
4.0
5.0
Suggestions
Can watch again
No
Good for kids
No
Good for dates
No
Wait to rent it
No
You'd think that being the release following Baahubali is a huge responsibility. It isn't, really. Having been to Marseille on vacation doesn't mean we stop taking the share auto from Mehdipatnam to Madhapur. Allari Naresh realises this simple fact and comes up with a movie which may be termed as the complement of Baahubali. If the latter is a high-budget, high concept, imaginatively written, painstakingly mounted film which we want to show to the world and pride over, Allari Naresh's James Bond is a low-budget, no concept, run-of-the-mill, casually executed film which we'd rather keep to ourselves and at best spend a lazy Sunday afternoon with.

Pooja (Sakshi Choudhary) is the daughter of a mafioso in Dubai and grows up to be a gun-toting don herself. After her father passes away she gets to know of her mother's existence and establishes contact with her. She however conceals her profession from her unwitting mother. Soon she finds herself agreeing to marriage to keep her aged mother happy, and asks her men to find a simpleton who'll agree to a conditional marriage for money.

The simpleton arrives in the form of the timid Nani (Allari Naresh) who agrees to the marriage sans the awareness of any of the terms and conditions in this agreement. This naturally entails any number of comic eventualities, and the movie attempts to milk these opportunities.

Allari Naresh does nothing he hasn't done before, and we shouldn't be surprised if we find him sleepwalking on the sets. Sakshi Choudhary, however, undertakes a role which looks quite demanding. She is required to fight, threaten, jump, shoot, look attractive... we imagine they forgot to ask her to act.

Nobody does anything new in the movie. However, it is fun to watch some people just re-enact the same old shtick over and over. Like Jayaprakash Reddy, who brings the house down every time he speaks that thick Seema accent. And Krishna Bhagawan whose deadpan style of sarcastic speech can't help but tickle you. Or Posani for that matter. He has some of the funniest scenes, and nails them all with his own unique dialogue delivery. Raghu Babu too has a sizeable role, and makes you smile a lot.

Barring that, everything else is quite ordinary. Nothing ambitious, nothing offensive, nothing memorable nor bothersome. If you are high strung from all the high concept and unusual cinema that's releasing of late (forget Baahubali, did we mention that Salman Khan gets thrashed on screen in Bajrangi Bhaijaan?), and are just looking for something that mildly entertains without attempting to make you think or be highly receptive, then James Bond is exactly what the doctor ordered. Oh, and watch it before Mahesh Babu takes over the screens.
Share. Save. Connect.
Tweet
JAMES BOND (TELUGU) SNAPSHOT 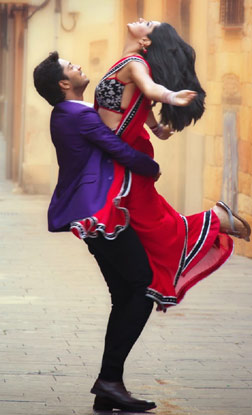 ADVERTISEMENT
This page was tagged for
James Bond Telugu full movies downloading Alla Naresh
James Bond (Telugu) telugu movie
James Bond (Telugu) reviews
release date
Allari Naresh, Sakshi Choudhary
Follow @fullhyderabad
Follow fullhyd.com on
About Hyderabad
The Hyderabad Community
Improve fullhyd.com
More
Our Other Local Guides
Our other sites
© Copyright 1999-2009 LRR Technologies (Hyderabad), Pvt Ltd. All rights reserved. fullhyd, fullhyderabad, Welcome To The Neighbourhood are trademarks of LRR Technologies (Hyderabad) Pvt Ltd. The textual, graphic, audio and audiovisual material in this site is protected by copyright law. You may not copy, distribute, or use this material except as necessary for your personal, non-commercial use. Any trademarks are the properties of their respective owners. More on Hyderabad, India. Jobs in Hyderabad.