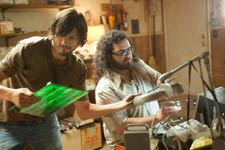 Nupur Barua / fullhyd.com
EDITOR RATING
6.0
Performances
Script
Music/Soundtrack
Visuals
6.0
5.0
5.0
7.0
Suggestions
Can watch again
Yes
Good for kids
No
Good for dates
Yes
Wait for OTT
No
Steve Jobs is the inventor-genius who gave us the iPod, the iPhone and the iPad, to name a few objects of desire in our technology-driven world. What he also gave us is a reason to hope that someday, despite all the troubles and rejections, one's potential will be truly appreciated. His motto was, "Let's go invent tomorrow instead of worrying about what happened yesterday". He was a rebel, intellect, whiz kid, and brilliant entrepreneur, who passed away too soon and, therefore, became even more intriguing.

So when a movie based on his life hits the theatres, you have high hopes from it. Not without reason - we all need that one real-life legend to worship. Jobs, the Joshua Michael Stern film that releases this weekend, begins interestingly enough. Steve Jobs (Ashton Kutcher) introduces the iPod in 2001, and just when he revels in the appreciation, the story moves back in time to 1974.

Jobs has had to drop out of college because he cannot afford the fees, but he has a sympathiser in his Dean (James Woods). Life is cool (it is, after all, the 1970s), and Jobs and his friend Daniel Kottke (Lukas Haas), under the influence of LSD and Indian philosophy, trek around in India for a while.

A couple of years later, Jobs teams up with his old friend Steve Wozniak (Josh Gad), who has just invented a new personal computer that they name the Apple 1. Their company is named Apple Computer, and despite a few setbacks, it flourishes after Mike Markkula (Dermot Mulroney) invests some money in their endeavours.

Jobs breaks ties with his old friends and lover (who gives birth to his daughter), and his behaviour borders on the eccentric. He loses his job soon after Macintosh is launched, more for his defiance of norms at the workplace than anything else. This is the mid-1980s.

A decade later, Jobs is back at Apple (now no longer his) as the CEO, and takes the company to new heights.

The movie claims to be a true story, but somehow, the script seems incomplete. While it is not a surprise that the makers decide not to show the period of helplessness in his life after he is diagnosed with cancer, one would expect the film to end where it began - in 2001 - just to round things up. Instead, the story ends abruptly somewhere in the late 1990s, and you leave the theatre knowing something is missing.

The screenplay does not pervade your senses, nor does it engage your emotions. It has its moments - Jobs' irrational ego, his unwillingness to become a father, his coldness towards the people who supported him, and then his complete about turn, when he becomes a more responsible person. That journey is captured decently enough (as far as narration goes), but always superficially.

Just when you think you can expect an insight into his psyche, the pace changes, and a new issue crops up. It is almost as if the makers are wary of giving too much away. And so, Steve Jobs becomes a caricature at times.

In recent interviews, two men portrayed in the movie, Steve Wozniak and Daniel Kottke, have stated that the film has it all wrong. While Kottke relents that the makers did their best to paint a truthful picture most of the time, Wozniak insists that Jobs was depicted incorrectly, as was their relationship. He also claims that he was consulted on the script and he was not happy with the way it flowed. Meanwhile, Ashton Kutcher and Joshua Michael Stern insist that Wozniak was uncooperative because he is working on another biopic of the late Steve Jobs.

Whatever the reasons, the fact remains that the script has an erratic pace, and seems not so well-researched - in short, it seems incomplete. Clich?©s are abundant in dialogues and situations, and you wonder if reality was tweaked a bit here and there just to provide drama.

Jobs is all about Ashton Kutcher. After the initial gasps of amazement at the audacity of casting the romantic hero as Steve Jobs, you will admit (reluctantly, maybe) that Kutcher has done a very good job. The physical resemblance is almost unbelievable, and the actor has obviously done his homework. He does go a bit over the top at times, but quickly regains the dignity required to play the role.

The other actors in the film are aptly cast, and despite Josh Gad's slightly irritating portrayal of Wozniak, they are all believable.

Production and costume designs are commendable. The music is soothing, and the editing is crisp, although the movie is about 2 hours in length. The cinematography and the lighting add to the mood of the movie, and enhance the different periods that the story moves through.

Steve Jobs is an interesting subject, and all tech lovers should watch this movie. Despite the obvious jerks in storytelling, it is still an inspiring tale of a man who believed in himself, and who overcame all odds to become a hero. After all, the saga of an underdog rising to great heights always finds resonance in the most cynical of audiences.
Share. Save. Connect.
Tweet
JOBS SNAPSHOT 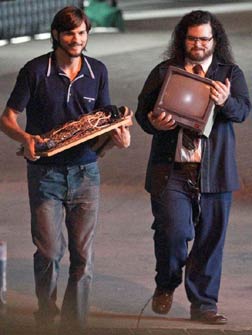 These were the questions that were running in the mind. The second one proved to be a bad judgement on my part as soon as the movie started. The very first scene convinced me that Ashton Kutcher did his home work for the part. His body language and mannerisms were impeccable.

Is this a movie on Steve Jobs? Unfortunately, this question was running at the back of head, even now. In fact, can that ever be categorized, a biography!!!

Jobs was a pathetic human being. He never lived up in the good books of his friends throughout his life. He became ultra famous as a visionary by leading a company called Apple. His business ideas are definitely genius. But this BIOGRAPHY neither showed his bad personal life nor the good entrepreneur life.

Jobs made apple the super successful IT company post the 90's after he introduced the famous iPhone and iPad. And the script conveniently leaves that part out. A computer manufacturing company entering the phone arena... That was thinking different. The misfit... And it doesn't even gets a mention. Whoa!!! What a biopic.

The troubling years of Steve Jobs when he is out of Apple gave us two company's. One is Next Technologies as seen in the film and the other one is PIXAR. I know that it is awkward to showcase another studio in your film, but please!!!

ADVERTISEMENT
This page was tagged for
Jobs english movie
Jobs reviews
release date
Ashton Kutcher, Josh Gad
theatres list
Follow @fullhyderabad
Follow fullhyd.com on
About Hyderabad
The Hyderabad Community
Improve fullhyd.com
More
Our Other Local Guides
Our other sites
© Copyright 1999-2009 LRR Technologies (Hyderabad), Pvt Ltd. All rights reserved. fullhyd, fullhyderabad, Welcome To The Neighbourhood are trademarks of LRR Technologies (Hyderabad) Pvt Ltd. The textual, graphic, audio and audiovisual material in this site is protected by copyright law. You may not copy, distribute, or use this material except as necessary for your personal, non-commercial use. Any trademarks are the properties of their respective owners. More on Hyderabad, India. Jobs in Hyderabad.