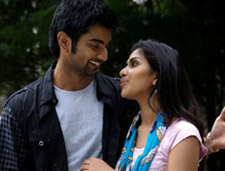 Kritika Deval / fullhyd.com
EDITOR RATING
2.0
Performances
Script
Music/Soundtrack
Visuals
4.0
1.0
4.0
5.0
Suggestions
Can watch again
No
Good for kids
No
Good for dates
No
Wait for OTT
No
There is something fundamentally wrong with a movie in which woman after woman propositions the hero to "take" her, in a manner as phlegmatic as one she would probably use to ask someone to pass her the butter. But then this particular movie is just plain wrong on so many levels, that we would rather work with this review on a "don't ask, don't tell" policy.

From the moment it commences on that long-winding ridiculous journey that its makers have the gall to call a "story", Nirantharam Nee Voohale proves to you that, yes, it is possible for a movie to utterly confound, and bore to the extent of catatonia, at the same time.

The first sight, after the credits, to assault your senses is that of a sidey looking guy pawing a drunken girl while she grunts like a pig with something stuck in its throat. Just as you're absorbing that, in comes a crazy guy with a knife, setting off a fight sequence that is implausible even for south Indian cinema standards.

The scene shifts to a B'lore-ish MNC where our square-as-a-chess-board hero, Ramachandran (Adharvaa), is a most sought-after young man. He turns down all his admirers because he is totally devoted to his sweetheart Charu (Amala Paul) in Hyderabad. We first see her in a song in which our turtle-doves go around being as retarded as possible.

Then more people die, and it turns out that good boy Ram is the killer. He "finishes off" his day's work, goes home to his sweetheart, looks appropriately psycho at all the appropriate moments, and thus ends the day. Enter the new CEO, Latha, who "happens" to look exactly like Charu, and stares at Ram "as if she'd like to eat him up" (as translated from the movie). Soon, they both have an accident, and Latha puts him under psychoanalysis.

What follows is a completely unnecessary flashback - that hopes to justify mental instability in the hero - in an equally unnecessary movie. And then you find out that Latha is actually Charu but Charu is not Latha but Latha is... wait! Wha...? ( We look at our watches, and damn it, it's only been an hour since the movie's begun - at least an hour and a half more of asininity to endure!)

The last scene, however, is where the shit really hits the fan and splatters all over the place - the heroine decides to stage her own kidnapping and murder, but, instead, is kidnapped for real by her fiancé's (not the hero) super-possessive psychotic gay lovers (this is where the "don't ask" part comes in) who are going to burn her alive.

An extremely lame side plot involving Santhanam passes for humour. Amala Paul, although pretty, is eerie in her forced cuteness (kinda like Teletubbies). Adharvaa oscillates between pretending to be a cardboard and staring psychotically. The slight relief that could've been provided by the comparatively superlative acting by Anupama Kumar (who plays Ram's mother) is also snatched away from us, courtesy awful lines, dubbing and plot.

The one or two hummable numbers that you've probably heard on FM are better off right there.

If you found yourself fascinated by the posters, or have absolutely nothing to do, you still don't want watch it. We get paid to put ourselves through this. There's no justification for you to do the same.
Share. Save. Connect.
Tweet
NIRANTHARAM NEE OOHALE SNAPSHOT 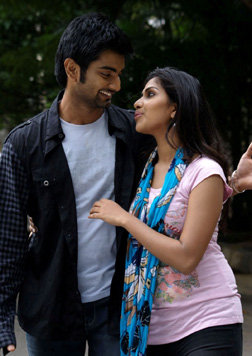 ADVERTISEMENT
This page was tagged for
Nirantharam Nee Oohale telugu movie
Nirantharam Nee Oohale reviews
release date
Adharva, Amala Paul
theatres list
Follow @fullhyderabad
Follow fullhyd.com on
About Hyderabad
The Hyderabad Community
Improve fullhyd.com
More
Our Other Local Guides
Our other sites
© Copyright 1999-2009 LRR Technologies (Hyderabad), Pvt Ltd. All rights reserved. fullhyd, fullhyderabad, Welcome To The Neighbourhood are trademarks of LRR Technologies (Hyderabad) Pvt Ltd. The textual, graphic, audio and audiovisual material in this site is protected by copyright law. You may not copy, distribute, or use this material except as necessary for your personal, non-commercial use. Any trademarks are the properties of their respective owners. More on Hyderabad, India. Jobs in Hyderabad.