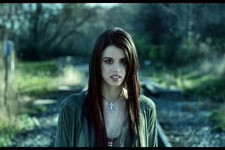 Ajay Kumar R / fullhyd.com
EDITOR RATING
5.0
Performances
Script
Music/Soundtrack
Visuals
6.0
4.0
4.0
4.0
Suggestions
Can watch again
No
Good for kids
No
Good for dates
No
Wait to rent it
Yes
After giving us a few, almost unknown box office horror films received with mixed reactions, director Stacy Title has this time decided to do, um, more of the same. She now takes Voldemort, turns him inside out, gives him a fashion sense and cool tattoos, and marries him to Groot to give you The Boogeyman ...er, The Bye Bye Man.

But to your surprise, she gives him a psychological/horror spin, too. The Bye Bye Man does derail a bit from the usual horror elements in the second bit and makes you doubt if all that is merely in his mind. But fret not - Title doesn't believe in hope.

So Title's Bye Bye Man, much like the "Bloody-Mary" devil or the Boogeyman himself, is every child's terror because it appears to anyone who utters its name, and starts controlling them and having psychopathic fun with them for unknown reasons. It is apparently the reason that there have been several psychotic killing rampages in a small rural area outside Madison, Wisconsin - particularly the one in which a man kills everyone in his family except his wife, and then shoots himself.

Brilliant college student Elliot (Douglas Smith), his BFF John (Lucien Laviscount) and his girlfriend Sasha (Cressida Bonas) rent a Conjuring-esque house in Madison, and immediately discover that the decrepit place is rather weird. They start hearing strange voices and noises, and start seeing visions whose more rational reasons can well be Carbon Monoxide or Shrooms or an unfortunate hit to the Amygdala during their college parties. They also witness several other strange occurrences like deep scratches on the wall (bad sound effects, we may add).

As things get worse, they try everything from seances to going to the local college library to finding any ounce of information they can. And they do. They are being haunted by "Bye Bye Man", who only appears to those who mutter his name. But they also discover something about their ultimate fates. And what follows is a confluence of psychological thriller and psycho-horror - or, simply put, some poor guy on a really bad trip.

The Bye Bye Man seems to merge Conjuring and Final Destination, but makes you feel neither the ominousness like Conjuring did nor the almost prophetic finality of death like Final Destination did. It attempts being a psycho-thriller, and while there are some moments of schlocks that keep you engaged for a while, on the whole it is pretty lacklustre. And some crazy twists and turns will leave you either excited or annoyed, depending on what you drank during the interval.

Indeed, the film would have been better off if it were either a thriller or a horror - the merger of the two genres is its downfall.

And being on a small budget of a few million dollars, it keeps its graphics (James Kniest) to a minimum, rendering the lead evil spirit funny rather than scary. But a tight budget cannot be a valid reason especially when there are other movies with a smaller budget. As an example, Austrian film Goodbye Mommy (2014) is probably one of the scariest and nastiest horror pics out there (its cinematography, screenplay, costumes, plot, and other elements are flawless).

The movie also doesn't make any effort in explaining the demon's backstory, where it came from, or what are its motives. But that is compensated by a repetitive dream sequence of a train moving forward in the dark with nothing but its own headlight to guide it. And it moves over a bunch of people. The enigmatic scene, despite the Elm Street-like CG, is an indicator for a possible sequel and a prequel.

The performances of a few actors are however compelling. Carrie-Anne Moss as Detective Shaw (you may remember her as Harper from Netflix TV series Jessica Jones), Michael Trucco as Virgil (Elliot's brother), Jenna Kanell as Kim (the seance girl), and a few others keep the audiences tolerant. Smith, too, does a decent job as a person on the edge of going crazy.

The Bye Bye Man is a one-time watch - if not for the scares, at least for the laughs.
Share. Save. Connect.
Tweet
THE BYE BYE MAN SNAPSHOT 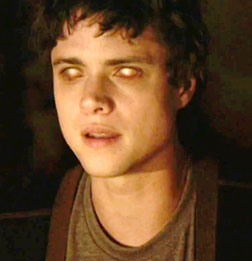 ADVERTISEMENT
This page was tagged for
The Bye Bye Man english movie
The Bye Bye Man reviews
release date
Douglas Smith, Cressida Bonas
theatres list
Follow @fullhyderabad
Follow fullhyd.com on
About Hyderabad
The Hyderabad Community
Improve fullhyd.com
More
Our Other Local Guides
Our other sites
© Copyright 1999-2009 LRR Technologies (Hyderabad), Pvt Ltd. All rights reserved. fullhyd, fullhyderabad, Welcome To The Neighbourhood are trademarks of LRR Technologies (Hyderabad) Pvt Ltd. The textual, graphic, audio and audiovisual material in this site is protected by copyright law. You may not copy, distribute, or use this material except as necessary for your personal, non-commercial use. Any trademarks are the properties of their respective owners. More on Hyderabad, India. Jobs in Hyderabad.