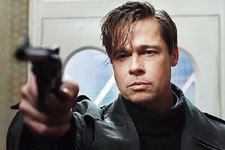 Swaroop Thotada / fullhyd.com
EDITOR RATING
6.0
Performances
Script
Music/Soundtrack
Visuals
7.0
6.0
7.0
8.0
Suggestions
Can watch again
No
Good for kids
No
Good for dates
Yes
Wait for OTT
No
Allied falls somewhere between wartime romance, spy-thriller and homage to the old-school Hitchcock mysteries, and the deliberate ambiguity is to enable it exploit all the tricks in the book. As the plot developments finally land it somewhere, you take the hint as to how to align your mind to enjoy the ride. But the film doesn't. It is so lost in its revelling, so indulgent in its rendering and so confident of being the masterpiece it wants to be, that it takes a tad more lenience than is comfortable to us with the genre. However, even though the film ignores the evolution of wartime films from the classic romances like Casablanca, the insistence on the old-school charm pays off. But that, too, only till the film takes it too far.

Max Vatan (Brad Pitt), a Canadian intelligence officer, arrives at the Moroccan desert on a parachute, and heads for Casablanca to meet his made-up wife Marianne Beausejour (Marion Cotillard), a French resistance fighter, and they embark on a dangerous mission: to assassinate a German ambassador. Pitt curiously restrains from unleashing his charm here and plays Max reserved, and is complemented by the buoyant and seductively coy Cotillard. Their eventual romance has to go through the inevitable friction between their made-up personalities and spy-clever defenses.

Being acquainted with the game to be played much before Max arrives, Marianne has the edge here and guides him. She even says his Parisian accent is terrible and starts to train him. Not at all hesitant to flaunt her mastery of the craft, she even unbuttons her blouse to see whether Max can be distracted.

Pitt provides the friction by choosing to be a man of steely precision and indifference. Though shorthanded, these scenes lend steam, but the eventual falling of the duo for each other can't help but feel like a plot contrivance. You are thrown hints of quiet seduction and abrupt moments of passion, but don't see how the wary distance they have maintained so far got shortened, as the roles are played only in the context of the mission and the characters are too lost in the plot.

The Bond style assassination scene is meticulously shot and is the highlight of the first hour. Surviving the nightmarish adventure, they marry each other and start a family. The passionately cunning Marianne is transformed into a tamed and doting wife - or is she?

Allied succeeds mostly in recreating the WW2 London and Morocco. The sets flaunt the props with glee, and the lavish halls and glittering drapes accommodate the debonair charisma of Pitt, but as said earlier he doesn't chew his way into them as he did in his other period drama Inglorious Basterds. While the all-too-neat sets take a dig at the authenticity, the film is not so shy of its homage to the old classics. It shares more than a few similarities with Casablanca apart from being set there.

The technical breakthroughs we expect from Zemeckis are there, but are mostly steered by Don Burgess' framing that marries off old-school simplicity and coming-of-age technique. Of course, all this is shouldered by the spectacular production sets and props.

But these achievements stand on their own as the film doesn't emerge greater than the sum of its parts, thanks to a hammy ending that doesn't sync with the flamboyance of Zemeckis' direction. For all the pretend-seriousness the movie displays in its cautious yet deliberate tribute to the bygone-era films, this attempt at tear-jerking betrays the film's poor judgment of when to stop taking it too seriously. Spielberg's Bridge Of Spies is based on a true story for a reason, perhaps.
Share. Save. Connect.
Tweet
ALLIED SNAPSHOT 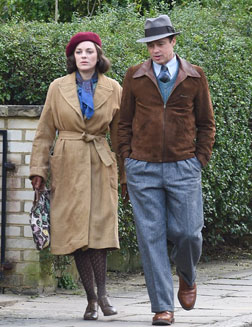 ADVERTISEMENT
This page was tagged for
Allied english movie
Allied reviews
release date
Brad Pitt, Marion Cotillard
theatres list
Follow @fullhyderabad
Follow fullhyd.com on
About Hyderabad
The Hyderabad Community
Improve fullhyd.com
More
Our Other Local Guides
Our other sites
© Copyright 1999-2009 LRR Technologies (Hyderabad), Pvt Ltd. All rights reserved. fullhyd, fullhyderabad, Welcome To The Neighbourhood are trademarks of LRR Technologies (Hyderabad) Pvt Ltd. The textual, graphic, audio and audiovisual material in this site is protected by copyright law. You may not copy, distribute, or use this material except as necessary for your personal, non-commercial use. Any trademarks are the properties of their respective owners. More on Hyderabad, India. Jobs in Hyderabad.