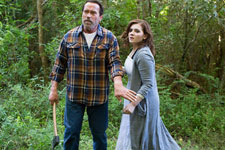 Nupur Barua / fullhyd.com
EDITOR RATING
7.0
Performances
Script
Music/Soundtrack
Visuals
8.0
7.0
7.0
8.0
Suggestions
Can watch again
Yes
Good for kids
No
Good for dates
Yes
Wait for OTT
No
When poet Robert Southey coined the term "zombie" in 1819, little did he know what a phenomenon the word would become, especially in the world of film. It is not quite clear how the term began to mean the undead without motor coordination, but today, in the 21st century, almost everybody knows what it means. We have had more than our fair share of zombie movies, the latest being the zombie-apocalypse genre. Maggie, directed by Henry Hobson, is exactly what you would expect yet another zombie movie to be. Or is it?

Sometime in the near future, the deadly Necroambulist virus has affected most of the world's population. This virus transforms people into zombies, slowly, and the government is trying its best to contain it, in vain. Curfews seem to be effective, but also inconvenient, as Wade Vogel (Arnold Schwarzenegger), a farmer, finds out. His daughter Maggie (Abigail Breslin) is trapped somewhere in the city, unable to get home, and he needs to find her.

Maggie has been bitten, and is taken into custody by the authorities. Wade, however, is allowed to take her home and he can keep her there till the infection spreads through her body. That is when he has to send her back to quarantine. Wade sends his younger children, Bobby (Aiden Flowers) and Molly (Carsen Flowers), to live with their grandmother, and brings Maggie home to her stepmother, Caroline (Joely Richardson). He also burns his fields, to stop the spread of the virus.

Maggie pretends that everything is normal, but she keeps to herself, mostly in her room. Both Wade and Maggie get a reality check when Wade has to kill a couple of zombies - a father and a daughter - hovering outside their house. Wracked with guilt, he visits Bonnie (Rachel Whitman Groves), the wife of his victim, who tells him that she did not send her husband and daughter to quarantine as she was instructed to, because she thinks the conditions there are inhuman.

Wade is now convinced that he cannot send Maggie to quarantine once the infection spreads. His alternative is to kill her when the time comes, either by a slow and painful lethal injection, or by snapping her neck. Wade is not keen on either, and instead concentrates on bonding with Maggie. As Maggie's condition deteriorates, Wade realises that he does not have too much time left with her, and that he is helpless to do anything about it.

The redeeming factor in the screenplay is its fresh approach to the zombie problem (a problem that exists in a fantastical world, but you will be forgiven for forgetting that). This is essentially a story of a father-daughter relationship, and the haplessness of the situation. It takes a concept usually based in horror, and makes it an emotional tale of love and sacrifice. It begins slowly, and sucks us into a believable world that is scary and depressing. Then it tells us that there is no turning back.

The frustration and the despair of the characters are palpable and real. You understand the angst and the need to cheat the authorities. Till the very end, you are caught up in the father's struggle to make the world a better place, and you may even find yourself praying that they all make it through this nightmare. The initial nonchalance of the victim, Maggie, and the eventual glossing over of the situation by Wade himself, do not affect the powerful narrative. In fact, there is very little fault you can find with the story. The movie begins at a steady pace, and maintains it, till the point where you know it has to speed up.

Not that Maggie is a unique movie. Far from it. Some of the sub-plots are so predictable that you may be distracted from the larger plot. However, the narrative never lets you down, and you will find yourself gripping the edge of your armrest at times. The genre is not pure horror, as mentioned above, but the script does manage to throw in some thrills.

Schwarzenegger said that this was the most human zombie movie ever, and he may be right. This is also his most touching role till date. As Wade tries to cure her, save her, and protect her, losing his reason and sanity, you will find yourself rooting for him, against all odds. He is no action hero in this movie, but a lone crusader, whose heart is slowly breaking, at the rate of his daughter's deterioration. It is somewhat unnerving to see him as an ordinary human being, but he does full justice to the role.

Abigail Breslin has grown into a powerful actor. She portrays a normal teenager, with mood swings and insecurities, even when she is slowly losing touch with her human side. She is convincing, and the reason for the lump in your throat. Joely Richardson is instantly likeable, as she tries to be the only sane thing in a world going to pieces. The supporting cast is commendable as well.

The visuals are dark and depressing, keeping in tune with the movie. The production design opts for spartan settings, without too much colour. The costumes are generic, as there does not seem to be much point in dressing up in such miserable times. The camera captures all of this brilliantly, although sometimes the visuals are not very discernible. The music is typical of a horror movie, with some emotional background score thrown in. The editing is perfect, and the movie ends exactly where it should.

Maggie is a surprise, and totally worth checking out. It is such an unexpected film that you may find yourself marvelling at the sheer audacity of the script. It is not the best film on zombies, sure, but this is one that you will not forget in a hurry. Watch it, even if it is just to check out Arnold Schwarzenegger.
Share. Save. Connect.
Tweet
MAGGIE SNAPSHOT 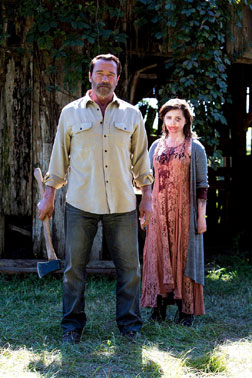 ADVERTISEMENT
This page was tagged for
Maggie english movie
Maggie reviews
release date
Abigail Breslin, Arnold Schwarzenegger
theatres list
Follow @fullhyderabad
Follow fullhyd.com on
About Hyderabad
The Hyderabad Community
Improve fullhyd.com
More
Our Other Local Guides
Our other sites
© Copyright 1999-2009 LRR Technologies (Hyderabad), Pvt Ltd. All rights reserved. fullhyd, fullhyderabad, Welcome To The Neighbourhood are trademarks of LRR Technologies (Hyderabad) Pvt Ltd. The textual, graphic, audio and audiovisual material in this site is protected by copyright law. You may not copy, distribute, or use this material except as necessary for your personal, non-commercial use. Any trademarks are the properties of their respective owners. More on Hyderabad, India. Jobs in Hyderabad.