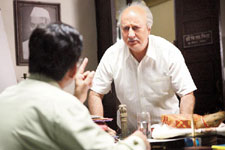 Nupur Barua / fullhyd.com
EDITOR RATING
5.0
Performances
Script
Music/Soundtrack
Visuals
6.0
5.0
4.0
6.0
Suggestions
Can watch again
No
Good for kids
No
Good for dates
Yes
Wait to rent it
No
Author Jonathan Swift once said, "Satire is a sort of glass, wherein beholders do generally discover everybody's face but their own." Replace "beholders" with "filmmakers" in the case of the newly-released Ekkees Toppon Ki Salaami, and that quote may just make sense. Let us explain how.

First, however, the story. Purushottam Nayaran Joshi (Anupam Kher) is an honest municipality worker in Mumbai. He is diligent and hardworking, but the world has somehow snatched away whatever little appreciation he may have received, throughout his life - from the elocution trophy (the prize ceremony was disrupted because Jawaharlal Nehru died), to being robbed out of a career in the army (other cadets cheated), to his own marriage (suddenly losing its joy because the Emergency was imposed on the country). This lack of a fulfilling life has however never made him stray from his chosen path of honesty.

His biggest failure, however, is his children - Shekhar (Manu Rishi Chadha) and Subhash (Divyendu Sharma). The former is a corrupt Municipal worker, and the latter is a goon who works for a political party. In fact, Purushottam's biggest sorrow is that Subhash worships the decadent and useless Chief Minister, Daya Shankar Pandey (Rajesh Sharma).

His tragic life is cut short on what should have been his happiest day - the day of his retirement. He is accused of stealing the fogging machine that was allocated to him as part of his job as mosquito killer, and his pension is withheld. Shattered, he comes home, and falls ill. His insensitive sons, knowing that his demise is inevitable, are more interested in getting him to sign a paper that hands over his house to them. Disappointed beyond belief, Purushottam breathes his last.

Just before his final breath, however, he makes a demand - that he be given appreciation for his honesty - a 21-gun/cannon salute. His sons ignore this, but Subhash's girlfriend, Taanya (Aditi Sharma), who works as the Chief Minister's PR and speech writer, pressurises Subhash to fulfil his father's dying wish. Will the two sons finally recognise and appreciate all that their father has done for them, and will they be able to grant him his desire, posthumously?

The story has its heart in the right place. It is a commentary on the demise of honesty (personified by Purushottam) in a country/society filled with decadence (personified by the Chief Minister). What does one think of a society in which the poor man cannot get a decent funeral, but a crook gets a 21-gun salute? The obvious intention of the writer is to bring to our notice how immune we have become, as a nation, to the injustice that is meted out to the common man. And that it is time we stood up for our beliefs.

Another point the makers touch upon is the ingratitude that more and more children exhibit towards their parents. In this story, Purushottam spends a fortune to ensure a good education for his sons, but they run away from boarding school to eventually become drifters and underachievers. They lack the humanity and respect that should come naturally for their father. Instead, they complain about his moral lectures.

The premise, as mentioned above, is interesting enough to sit up and take notice of. The problem lies in the screenplay and its execution. The sequence of events is not fascinating enough for you to sit patiently through two-and-a-half hours of convoluted plots that involve a ditzy mistress, a manipulative mother and a strict security head, amongst others.

The dialogues are rather dull for a satire, and the humour is inconsistent and almost insensitive, just like most of the characters. The resolution is almost predictable, and you cannot help but draw parallels, rather unfavourably, with the iconic Jaane Bhi Do Yaaron.

Anupam Kher shines in this movie, and his crispy clean clothes help. He plays a disappointed man in the first half, and a corpse in the second - both with panache. He portrays the helplessness of the common man and yet retains a certain moral superiority that can only be aspirational to most of the audience.

Manu Rishi Chadha is rather tame here, and definitely not very likeable. Divyendu Sharma, on the other hand, looks out of place playing the goon. Aditi Sharma is decent. Neha Dhupia with her deliberate overacting and Uttara Baokar with her sincerity are sure to bowl you over. Sudhir Pande is wasted, but he manages to give you a few genuine laughs.

The production and costume designs manage to give you a Mumbai that you can identify with - the chawls, the dirt, the crowds, the offices etc. The scene in the gutter is a little unrealistic, in terms of look. There are a few editing jumps in the movie, and that makes the flow a little disoriented. The cinematography is average, and the music is not catchy, especially for a Ram Sampath soundtrack.

Again, this is no Jaane Bhi Do Yaaron, and it is not even a Tere Bin Laden, but Ekkess Toppon Ki Salaami may just find a resonance in the audience, despite its flaws. It is good enough for a one-time watch, and may even provoke you into discussions on the world around you in general and our country in particular. Just go with oodles of patience.
Share. Save. Connect.
Tweet
EKKEES TOPPON KI SALAAMI SNAPSHOT 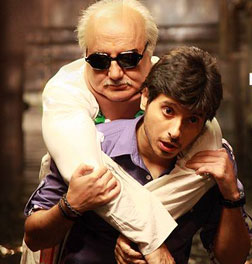 ADVERTISEMENT
This page was tagged for
Ekkees Toppon Ki Salaami hindi movie
Ekkees Toppon Ki Salaami reviews
release date
Anupam Kher, Neha Dhupia
theatres list
Follow @fullhyderabad
Follow fullhyd.com on
About Hyderabad
The Hyderabad Community
Improve fullhyd.com
More
Our Other Local Guides
Our other sites
© Copyright 1999-2009 LRR Technologies (Hyderabad), Pvt Ltd. All rights reserved. fullhyd, fullhyderabad, Welcome To The Neighbourhood are trademarks of LRR Technologies (Hyderabad) Pvt Ltd. The textual, graphic, audio and audiovisual material in this site is protected by copyright law. You may not copy, distribute, or use this material except as necessary for your personal, non-commercial use. Any trademarks are the properties of their respective owners. More on Hyderabad, India. Jobs in Hyderabad.