Rise Of The Guardians (3D) Review 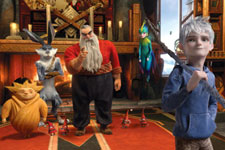 Nupur Barua / fullhyd.com
EDITOR RATING
6.0
Performances
Script
Music/Soundtrack
Visuals
6.0
5.0
6.0
7.0
Suggestions
Can watch again
No
Good for kids
Yes
Good for dates
No
Wait for OTT
No
Oh... to be a child again! When fluffy clouds reminded you of candy floss, when parents indulged your littlest whimsical fantasies, and when it was just so easy to be happy in a make-believe world. And the end of that is when the problems begin - when you stop believing in the nicer, albeit ideal and imaginary, stuff, fear (not a part of your life before this) of the unknown shapes you as a person.

That is what Rise Of The Guardians is all about. All the "myths" of kiddie dreams apparently do exist. They are the guardians of children's minds, and each one has a centre, or core duty, that is their individual responsibility - Santa Claus (Alec Baldwin) is all about wonder, the Easter Bunny (Hugh Jackman) brings the hop back into springtime, the Sandman sends out golden dreams, and the Tooth Fairy (Isla Fisher) preserves memories through the teeth she and her team of fairies collect. Their boss is the man on the moon, who guides them through difficult times.

The catch is this - as long as the children around the world believe in their existence, the guardians will possess special powers and privileges. There exist other mythical characters, but since they are not too popular, or not believed in too widely, they are neither guardians, nor can they be seen by human children.

And one such character is Jack Frost (Chris Pine). He cannot remember where he comes from or what his purpose in life is. For 300 years, he has produced frost and run around doing his mischief, perfectly happy to be a loner, but he sometimes misses being acknowledged. So imagine his surprise when the Guardians try to make him one of them.

Apparently, there is now a common enemy, who threatens to destroy the innocence and happiness inherent in children. This is the Boogeyman, or Pitch Black (Jude Law), whom people stopped believing in after the Dark Ages, and who now wants to be prominently dominant in the minds of kids. The man on the moon thinks Jack Frost is the correct person to deal with this, but will he? Will he rediscover his identity and history? And will he find his centre?

For a concept that is immediately appealing, the story-telling in Rise Of The Guardians is a tad disappointing. The director falls back upon clichés and some tried-and-tested emotional parameters to hook the audience, and this fails, largely because this story should be straight from the heart, without gimmicks, to be able to connect with the audience. Also, the makers do not pay enough attention to the emotional/personal journey and evolution of the main character. His turnaround from indifferent boy to hero is sketchy and haphazard.

What works is the idea - that fear (Pitch Black) becomes a part of our lives when we stop believing in the goodness of things like the Tooth Fairy. The characters mentioned are the ones we know of, but this must be the first movie that shows what a difficult and stressful life they lead. There is however enough humour and tomfoolery to ensure that the film does not become too dark (and that the makers have managed quite well).

Chris Pine sounds a little old to be Jack Frost, and Alec Baldwin does not have a very convincing Russian accent, but you get used to these voices after a point. While all the characters grow on you, the art is not uniform. Frost looks too Manga to be a part of this world, and the white hair does not help. The 3D works for some portions of the movie, but it looks equally good as a 2D movie.

Kids will love the Bunny with the boomerang (nice, unconventional touch) and the Sandman who communicates through sand images. They will also love the snowball fights and the little Baby Tooth Fairies. They may not, however, get the deeper, philosophical message that the movie seems to communicate. It is a feel-good film, speaking of hope and love, despite the Boogeyman, but in spite of its short length, it seems to drag at times. 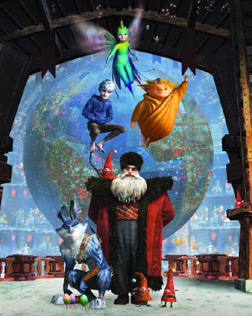 ADVERTISEMENT
This page was tagged for
Rise Of The Guardians (3D) english movie
Rise Of The Guardians (3D) reviews
release date
Chris Pine - Jack Frost (voice), Alec Baldwin - North (voice)
theatres list
Follow @fullhyderabad
Follow fullhyd.com on
About Hyderabad
The Hyderabad Community
Improve fullhyd.com
More
Our Other Local Guides
Our other sites
© Copyright 1999-2009 LRR Technologies (Hyderabad), Pvt Ltd. All rights reserved. fullhyd, fullhyderabad, Welcome To The Neighbourhood are trademarks of LRR Technologies (Hyderabad) Pvt Ltd. The textual, graphic, audio and audiovisual material in this site is protected by copyright law. You may not copy, distribute, or use this material except as necessary for your personal, non-commercial use. Any trademarks are the properties of their respective owners. More on Hyderabad, India. Jobs in Hyderabad.