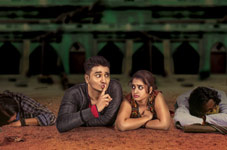 Ravi Kandala / fullhyd.com
EDITOR RATING
3.5
Performances
Script
Music/Soundtrack
Visuals
5.0
3.0
3.0
6.0
Suggestions
Can watch again
No
Good for kids
No
Good for dates
No
Wait for OTT
No
Reading the interviews of the cast and crew of any movie is, as you are perhaps painfully aware, the wrong thing to do. It just raises expectations, and then when you watch the movie, it might make you laugh at the most inopportune moments.

Actor Nikhil, in the interviews for Sankarabharanam, said that he lived with NRIs and studied their body language to play his character in the movie. We watched the movie and realized that Nikhil's played the role exactly the way he played Surya in Surya Vs Surya or Karthikeya in Karthikeya. And that the role did not require any study of NRIs or the way they behaved. All it needed was a good hard look at some old Venkatesh movies (or at Phas Gaye Re Obama upon which Sankarabharanam is based).

Then, Kona Venkat, the writer of Sankarabharanam, said that he wrote and encouraged this movie because he wanted writers to think out of the box and give different scripts. A few minutes into this film, you realize that what he meant by that was that he wanted writers to copy Hindi movies. He also mentioned that there is a reason they named this movie Sankarabharanam, and that he had utmost respect for the old classic. Ten minutes into the film you hear the word for the first time, and you realize again that the title is nothing but a gimmick.

Sankarabharanam, in spite of all of the denials issued by the team, is a freemake of Phas Gaye Re Obama. Gautam (Nikhil Siddhartha) plays an NRI who comes to Bihar to sell off his family's old castle named Sankarabharanam. Gautam's father has been cheated by his NRI partners and he needs the money to pay off the bank. When he reaches Bihar, he realizes that the castle is occupied by his relatives. While he is busy hoodwinking his relatives so he can sell the castle, three different gangs plan to kidnap Gautam thinking he has loads of money back home. How Nikhil escapes from these gangs and solves his family's problems forms the rest of the movie.

Sankarabharanam starts off decently and then rapidly slides towards mediocrity with an increasing number of "praasa kosam praanam teesestaaru" dialogues that characters utter without any rhyme or reason. Phas Gaye Re Obama was a smart little film that had great humor and little in terms of sentiment or crowd-pleasing scenes. Kona Venkat (writer and "direction supervisor") takes that smart little film, and adds loads of irrelevant comedy and loads of family sentiment. Unfortunately neither the humor nor the sentiment work, leaving you cold.

The film also runs for too long with the real plot beginning only in the second half. The songs are pretty irrelevant and are not great on your ears, either. The only plus for the movie is that it is funny in parts - especially when "Thirty Years" Prithvi gets his share of screentime.

Nikhil does his usual shtick while Nanditha (she of the big, emotive expressive eyes fame) barely gets a chance to express herself. There is a huge supporting cast including Anjali, Rao Ramesh, Suman, Sitara and several others, but they don't have much to do. Senior actors like Sanjay Mishra are wasted.

Technically, the film is nicely shot, and the landscapes of Bihar (or whatever is passed off as Bihar in the movie) are shown beautifully. The songs, as mentioned earlier, are merely excuses for loo-breaks.

Sankarabharanam kills two birds in one shot - i. e. tarnishes your memories of two good films. We'd recommend buying some popcorn at the theatre and just returning home, since that's going to be the only enjoyable thing anyway.
Share. Save. Connect.
Tweet
SANKARABHARANAM (2015) SNAPSHOT 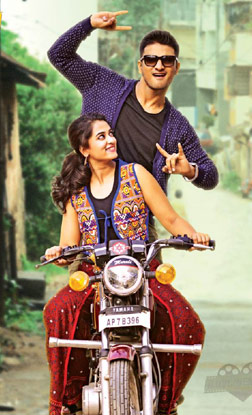 See Sankarabharanam (2015) full details
TOP COMMENT
rahulsachinsourav123 on 6th Dec 2015, 10:24am | Permalink
Pathetic would be an understatement, reviewer had been generous with 3.5 stars. One of those movies which I struggled to last movie duration, by the time item song of Anjali came up, its game over for me. Bad acting, nonsensical songs, stupid performances, clueless direction and poor jokes all along, this is perfect example of how all things can go wrong.

Some people like Kona Venkat surely know how to pull down and bring the worst out of even decent actors like Nikhil, Nanditha, Sapthagiri, Rao Ramesh, etc. He needs to take break and introspect himself. He has the habit of trying to claim all credit for successes and trying wriggle out of failures by pushing blame onto others (read Bruce Lee and Srinu Vaitla). Now since he highlighted himself as "Direction Supervisor", I am very curious to know what stories he is going to tell in media for this super flop.

Some people like Kona Venkat surely know how to pull down and bring the worst out of even decent actors like Nikhil, Nanditha, Sapthagiri, Rao Ramesh, etc. He needs to take break and introspect himself. He has the habit of trying to claim all credit for successes and trying wriggle out of failures by pushing blame onto others (read Bruce Lee and Srinu Vaitla). Now since he highlighted himself as "Direction Supervisor", I am very curious to know what stories he is going to tell in media for this super flop.

ADVERTISEMENT
This page was tagged for
sankarabharanam telugu movie 2015 cast
Sankarabharanam (2015) telugu movie
Sankarabharanam (2015) reviews
release date
Nikhil Siddharth, Nanditha Raj
Follow @fullhyderabad
Follow fullhyd.com on
About Hyderabad
The Hyderabad Community
Improve fullhyd.com
More
Our Other Local Guides
Our other sites
© Copyright 1999-2009 LRR Technologies (Hyderabad), Pvt Ltd. All rights reserved. fullhyd, fullhyderabad, Welcome To The Neighbourhood are trademarks of LRR Technologies (Hyderabad) Pvt Ltd. The textual, graphic, audio and audiovisual material in this site is protected by copyright law. You may not copy, distribute, or use this material except as necessary for your personal, non-commercial use. Any trademarks are the properties of their respective owners. More on Hyderabad, India. Jobs in Hyderabad.