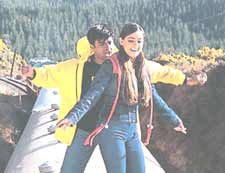 Smriti Kashyap / fullhyd.com
EDITOR RATING
3.0
Performances
Script
Music/Soundtrack
Visuals
NA
NA
NA
NA
Suggestions
Can watch again
NA
Good for kids
NA
Good for dates
NA
Wait for OTT
NA
What's the worse that could happen to a film? Any film? Especially if it's your debut? Nothing except the audience looking around for stones to pelt the screen. I don't know about the rest of Hyderabad, but I certainly was kicking myself for not carrying a basketful of them, and then some assorted vegetables.

Ghastly and a tedious waste of time is the best way to describe this flick. It starts with one major happy bang and ends in a slow, agonizing, hives-producing whimper. It's got a few flashes in the pan, but that's the only bright spot.

The tale has been narrated since man discovered fire. Madhavan, imaginatively called Maddy, and is a happy-go-lucky kinda guy who hasn't met the girl of his dreams. Then he sees blank beauty Reena (Diya) and does a few somersaults, before realizing that she already is engaged to mystery man Rajiv (actually Sam, played by Saif). Maddy decides to try his luck out and poses as Rajiv, and then, over the period of 5 days, they fall in love. The act falls apart when Sam comes into the picture, especially since Sam is Maddy's old bete noire, and then it's the usual torture.

The only times when the film holds your attention is when Maddy is grinning his million-dollar smile. But soon that chipmunk face begins to grate on your nerves. The Charminari version of Aishwarya Rai, Diya has as much talent as a cardboard box full of papier mache and paper clips, and the only thing she seems to be concerned about is whether her hair and makeup are in place. Her dumbness is more painful than having bamboo splits under your nails. Her acting leaves no place for drawing any empathy for her character, and you look at her with as much interest as you would a struggling dung beetle. I don't know if she will make it big in Hindi films, but she needs to shake off the whole act of a crown and sash still being draped all over her.

The film holds your attention only when Saif is on screen. He looks absolutely dapper, and you feel all fuzzy for him. The songs are pretty okay, and some of them actually register in your brain. This film is supposed to be a remake of Cheli, and remember that hot song Manohara? You should see the Hindi version. It's like bat barf with the choreography gone all weird - a slow, drugged version of the original, which is painful for all us Gult brothers and sisters.

Enough of my rant. You must see this movie yourself once to measure the extent of torture your body and soul can bear. And if you come out feeling good, then you must be a messiah of sorts who hasn't yet found his calling.
Share. Save. Connect.
Tweet
REHNA HAI TERE DIL... SNAPSHOT
REHNA HAI TERE DIL MEIN SNAPSHOT

ADVERTISEMENT
This page was tagged for
rehna hai tere dil mein reviews
Rehna Hai Tere Dil Mein hindi movie
Rehna Hai Tere Dil Mein reviews
release date
Madhavan, Diya Mirza
Follow @fullhyderabad
Follow fullhyd.com on
About Hyderabad
The Hyderabad Community
Improve fullhyd.com
More
Our Other Local Guides
Our other sites
© Copyright 1999-2009 LRR Technologies (Hyderabad), Pvt Ltd. All rights reserved. fullhyd, fullhyderabad, Welcome To The Neighbourhood are trademarks of LRR Technologies (Hyderabad) Pvt Ltd. The textual, graphic, audio and audiovisual material in this site is protected by copyright law. You may not copy, distribute, or use this material except as necessary for your personal, non-commercial use. Any trademarks are the properties of their respective owners. More on Hyderabad, India. Jobs in Hyderabad.