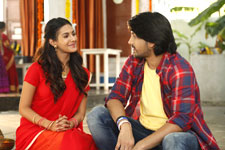 Veturi Sarma / fullhyd.com
EDITOR RATING
2.0
Performances
Script
Music/Soundtrack
Visuals
3.0
1.0
2.0
6.0
Suggestions
Can watch again
No
Good for kids
No
Good for dates
No
Wait to rent it
No
Ever since the success of Bhale Bhale Magadivoy, Telugu filmmakers must really be busy googling weird diseases/syndromes and their symptoms. Sanjana Reddy and her team zeroed in on kleptomania (a compulsion to steal things) and looked up the huge volume of Tollywood clichés that were always on call. Rajugadu gleefully incorporates every one of them in an attempt to recreate the success of the Nani comedy, but runs out of gags and gas too soon and makes a right royal mess of it.

So we have Rajugadu (Raj Tharun), a compulsive yet petty thief who starts off life by snitching the chain off the nurse who gave birth to him. His parents (Rajendra Prasad & Sithara) are amused at first, then annoyed when the school principal tells them that Raju has become adept at stealing, and finally appalled when his fiancé dumps him after she learns about his proclivities. Raju himself seems to be resigned to a fate of no one ever loving him given his disorder. But that is only for a second since the next moment he sets his eyes on Tanvi (Amyra Dastur) and goes about courtship all over again.

When the hero is a thief, Telugu screenwriting logic dictates that the heroine or her father should hate thieves. Now hatred must be a difficult emotion for Amyra to portray, so the father it had to be here. Satyanarayana (Nagineedu) hates thieves so much that at his most forgiving he asks all his co-villagers to beat up the thief with their chappals, and at his worst he chops off the hand of the thief.

So Rajugadu's work is really cut out. He has to confess to the girl that he is a pathological thief and hope that she doesn't mind it all that much, then do the same with the father and preserve his arm. The first bit is easy since as we noted the girl doesn't mind anything much - to mind it would mean she would need to show it, and she can't do that well. The father is a problem, but nothing that can't be solved by some good old Tollywood-style chicanery.

The downside for the film is that the chicanery is not very good and definitely very old. The idea of a kleptomaniac falling in love and trying to convince everyone that it is indeed a disorder and not his nature must be an exciting one for the makers to roll up their sleeves and get to work on. However, the potential dies a quick death in their over-reliance on the tried and tested, and on their reluctance at being original.

From a female director you would expect a fresh take on the dynamics between the lead pair, but you won't find even a whiff of it here. The romance is exasperating and gets increasingly trying with the stuff that is passed off for courtship. The utter lack of effort on the part of everyone involved in the film is a theme that runs throughout it, which is quite baffling since they seem to have plenty of resources at their disposal.

Raj Tharun plays Raj Tharun in every movie since that's what he knows well to do, but the script here denies him any opportunity to even be himself, and yet expects him to carry the film. Amyra is no actor and it is amusing to see her attempts at acting. Prudhvi (hysterically funny at times), Rajendra Prasad and Rao Ramesh try to infuse something, anything, into the movie, but the film is in general beneath them.

Gopi Sundar's music or score gives no reason for anyone to look back fondly on this. The cameraman and editor do a good job of packaging this one into a good-looking film of just over two hours, and are among the saving graces.

Don't let this one get your hard-earned money even if you are feeling particularly chuffed about your bank balance this salary weekend.
Share. Save. Connect.
Tweet
RAJUGADU SNAPSHOT 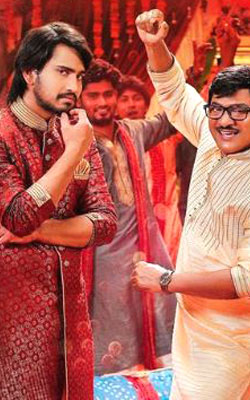 ADVERTISEMENT
This page was tagged for
Rajugadu telugu movie
Rajugadu reviews
release date
Raj Tharun, Amyra Dastur
theatres list
Follow @fullhyderabad
Follow fullhyd.com on
About Hyderabad
The Hyderabad Community
Improve fullhyd.com
More
Our Other Local Guides
Our other sites
© Copyright 1999-2009 LRR Technologies (Hyderabad), Pvt Ltd. All rights reserved. fullhyd, fullhyderabad, Welcome To The Neighbourhood are trademarks of LRR Technologies (Hyderabad) Pvt Ltd. The textual, graphic, audio and audiovisual material in this site is protected by copyright law. You may not copy, distribute, or use this material except as necessary for your personal, non-commercial use. Any trademarks are the properties of their respective owners. More on Hyderabad, India. Jobs in Hyderabad.