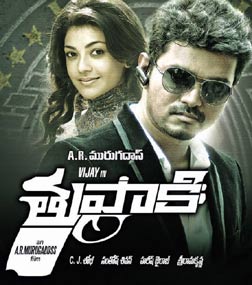 See Thupaki full details
THUPAKI USER REVIEWS
1 - 1 OF 1 COMMENTS
POSITIVE  |  NEGATIVE |  NEWEST  |  OLDEST  |  MOST HELPFUL  |  LEAST HELPFUL
USER RATING
9.0
1 USER
Performances
Script
Music/Soundtrack
Visuals
8.0
10.0
5.0
8.0
Can watch again - Yes
Good for kids - Yes
Good for dates - Yes
Wait to rent it - No
singhprashast2011 on 9th Sep 2015, 8:35pm | Permalink
In Tamil cinema, two names are very popular. One is Vijay, and other is A.R. Murugadoss. As we all know, Vijay is a great actor and Murugadoss is a very a very talented and creative director. So just imagine what would happen if they come together? Can't imagine? Then just do one thing- Watch Thuppakki, you will get the answers to all your questions.

Written and directed by Murugadoss, Thuppakki is one of the finest Tamil films ever. It's evident from every bit of the film's screenplay. Murugadoss has used the army concept very well and Vijay fits in it. I think that except Vijay anyone would have done this role but not with that perfection with which Vijay has done it. It's true, not just for Vijay, but for the entire film. The film scores well in every department and the occasional thrills in the film make you sit by the edge of the seat. It is the style of Murugadoss to make every scene look amazing. This thing is visible even in the intermission scene.

The fights, performances, VFX and screenplay are all amazing. You don't get a chance to blink at all. After all, the focus remains only on the storyline, and nothing except it. It's a very good point. Besides, there are no scenes that would actually hinder the film's screenplay. However, it's nothing except the music, that hinders a bit. If a few songs would have been removed, the pace would have been well. But still, you forget these small blemishes and go on to watch the film.

Overall, Thuppakki is a mind blowing entertainer, as well as a very different film by Vijay. If you want great thrill in your movies and some brainstorming puzzles, then watch Thuppakki. As I said before, you will get all your answers.

ADVERTISEMENT
This page was tagged for
sons of ram tamil movie
Thupaki telugu movie
Thupaki reviews
release date
Vijay, Kajal Aggarwal
Follow @fullhyderabad
Follow fullhyd.com on
About Hyderabad
The Hyderabad Community
Improve fullhyd.com
More
Our Other Local Guides
Our other sites
© Copyright 1999-2009 LRR Technologies (Hyderabad), Pvt Ltd. All rights reserved. fullhyd, fullhyderabad, Welcome To The Neighbourhood are trademarks of LRR Technologies (Hyderabad) Pvt Ltd. The textual, graphic, audio and audiovisual material in this site is protected by copyright law. You may not copy, distribute, or use this material except as necessary for your personal, non-commercial use. Any trademarks are the properties of their respective owners. More on Hyderabad, India. Jobs in Hyderabad.