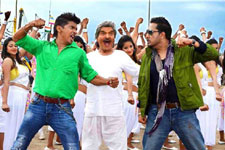 Nupur Barua / fullhyd.com
EDITOR RATING
3.0
Performances
Script
Music/Soundtrack
Visuals
4.0
3.0
4.0
5.0
Suggestions
Can watch again
No
Good for kids
No
Good for dates
No
Wait to rent it
No
If one (read: Mika Singh) has some disposable cash lying around after years of making a public spectacle of himself (although he did give us some good music, intermittently), one can easily "make a movie". Throw in some white skin, an aging boyish cult singer, and a few familiar faces (motto: "We will work anywhere for money, even if it makes people forget just how gifted we really are"), and you get a comedy.

Comedy, you ask? Well, yes. Because the producer in question here loves his own jokes, and wants to impose his brand of humour on unsuspecting, innocent movie watchers. Why? Because he CAN!

The jokes are not even original. In fact, every slapstick you have ever seen lends itself to this particular movie, which is largely a comedy of errors (the oft-use phrase to describe chaos, however silly - the poor Bard must be rolling in his grave). In a nutshell, the following are the elements of the story of this rather OTT movie:

i. Two men vie for the love of one woman
ii. Both men are named Balwinder Singh, but one is from Patiala and the other is from Ludhiana
iii. A millionaire is looking for his lost grandson, who is named Balwinder Singh
iv. The millionaire traces the only person who can tell him about his grandson, but she goes through a series of accidents (losing her memory, then regaining it etc.) before she can help him out
v. A race to prove identities and to win the girl ensues
vi. Many plot points make the movie
vii. All (except your senses) is well that ends well

To be fair to the writer of this one, the characters begin on an interesting note. They are compelling, although it is obvious that they are trying to emulate Amar and Prem from Andaaz Apna Apna. Just when you think that this may turn out to be a relaxingly silly movie, enter a bit of Humshakals. The only point in favour of this particular film is that it does a better job of the whole cross-dressing plot than the above-mentioned movie. While that does not say much about Balwinder Singh... Famous Ho Gaya, it is still a compliment.

The love triangle is the silliest part of the film, because the girl in question is as attractive as a door knob (not that she is not pretty - she just has zero personality). Why, you wonder, would these rather obnoxious men compete for her affections? Well, because they are obnoxious, we presume, and any other character, slightly more intelligent and exciting, would not have given them the time of the day.

The family angle has some emotional moments, but those are overshadowed by the need to make a slapstick-y song and dance humorous routine about everything. Some of the dialogues will definitely bring a smile to your face, if not a laugh, but those are few and far between. The use of amnesia as a central plot device has been overdone, but is actually funny, in a way. The comedy is not offensive, really, but just tiring. A little originality in the script (just a little) would have gone a long way towards making this a really funny cult comedy (okay, maybe not "cult").

Mika Singh is himself here, and he is very comfortable in front of the camera. His acting chops need some refining, but his self-confidence is evident. He does not try too hard to be the character that he is supposed to be playing. Shaan, on the other hand, is a little nervous, but as usual, instantly loveable. In our humble opinion, these two talented singers should stick to their area of expertise.

Gabriela Bertante, the heroine (because that is what she is), is not a great performer. She leaves you cold, and you also wonder why it is that these two men are making such asses of themselves over her. Rajpal Yadav, Asrani and Anupam Kher (yes, they are in this movie as well) have their moments, but are rather caricaturish (even for a slapstick). And then there is Vindoo Dara Singh, whose role in the film is a little confusing, but he seems to be enjoying himself thoroughly.

Technically, the movie is a riot of colours (obviously, since the main characters are Punjabis, and therefore the need to keep up appearances of "loud and obnoxious"). The overall production design and costumes set the film back a decade or so, because sophisticated they are not. The camera work is erratic, as is the editing. The music is of average quality, and there is even an item number by everybody's favourite item girl these days - the Golden Baby Doll, Sunny Leone.

There is no reason to watch Balwinder Singh... Famous Ho Gaya, unless you are a die-hard (read: extreme) fan of either Mika Singh or Shaan, or both. Or if you are in hiding (nobody would look for you in a theatre that plays this movie). And if you are wondering what the title is all about, you tell us, because we have not quite figured it out yet (except that there are two characters that have the same name).
Share. Save. Connect.
Tweet
BALWINDER SINGH FAMOUS HO... SNAPSHOT
BALWINDER SINGH FAMOUS HO GAYA SNAPSHOT 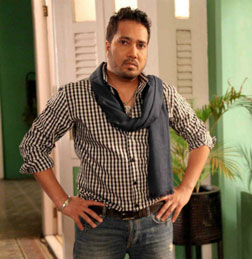 ADVERTISEMENT
This page was tagged for
Balwinder Singh Famous Ho Gaya hindi movie
Balwinder Singh Famous Ho Gaya reviews
release date
Mika Singh, Shaan
theatres list
Follow @fullhyderabad
Follow fullhyd.com on
About Hyderabad
The Hyderabad Community
Improve fullhyd.com
More
Our Other Local Guides
Our other sites
© Copyright 1999-2009 LRR Technologies (Hyderabad), Pvt Ltd. All rights reserved. fullhyd, fullhyderabad, Welcome To The Neighbourhood are trademarks of LRR Technologies (Hyderabad) Pvt Ltd. The textual, graphic, audio and audiovisual material in this site is protected by copyright law. You may not copy, distribute, or use this material except as necessary for your personal, non-commercial use. Any trademarks are the properties of their respective owners. More on Hyderabad, India. Jobs in Hyderabad.