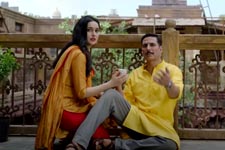 Punarvasu Pendse / fullhyd.com
EDITOR RATING
3.5
Performances
Script
Music/Soundtrack
Visuals
4.0
3.0
3.0
4.0
Suggestions
Can watch again
No
Good for kids
No
Good for dates
No
Wait for OTT
Yes
When one thinks of socially conscious Hindi films, the lead actors that come to mind are usually Ayushmann Khurrana and Rajkummar Rao. But it is Akshay Kumar, a more high-profile name than either of them, who is quietly racking up social dramedies - be it about organised religion, menstrual hygiene or sanitation.

Director Aanand L Rai tackles an age-old scourge in Raksha Bandhan, one that has been featured in multiple films in the past: dowry. When we say tackle, we mean rugby tackle, because there is a complete absence of any nuance that is required when dealing with such a sensitive topic, and the movie just plunges head-first into an issue which requires deft handling. We apologize to all rugby players, and do understand that high-level rugby tackles often, indeed, involve plenty of nuance - we are only talking about amateur league, which ties in well to this amateurish film.

Raksha Bandhan is a film about a brother and four sisters. Well, it is much more about the attention-loving brother Lala Kedarnath (Akshay Kumar) than any of his sisters - they are barely people to him. Only his beloved Gayatri (Sadia Khateeb) who, of course, happens to be tall, fair and soft-spoken, is a person, and the rest of them just embody traits that neither the script nor our Kedara like. Durga (Deepika Khanna) is fat, Lakshmi (Smrithi Srikanth) is dark and Saraswati (Sahejmeen Kaur) is tomboyish - and that is the extent of their identities.

By the time the film crawls along to right the wrongs its protagonist perpetuates - and boy oh boy, our protagonist is happily self-centered, misogynistic and borderline abusive to his sisters and his girlfriend - it is a case of too little, too late. For every step Raksha Bandhan tries to take forward, it has already taken two steps in the opposite direction. The only good thing about the movie is that it moves real quick from the time when "the incident that forces the lead character to reflect upon his actions" happens, and swiftly packs up without boring the viewer. Well, beyond that point anyway.

Akshay Kumar is more adept at playing a small-town guy than most Bollywood A-listers, but his Lala Kedarnath is an extremely one-dimensional act. Bhumi Pednekar has precious little to do but wait for her man to marry her. Sadia Khateeb has some important dialogue, including narration, but the rest of the women in the cast have been given the same treatment by the script that Kedarnath doles out to his sisters for most of the movie. Seema Pahwa comes in for a bit with a small role of the typical, transactional matchmaker.

The movie has way too many songs, and tragically not a single one of them is particularly memorable - not even the one Arijit Singh song that every movie seems to have nowadays. Himesh Reshammiya is not as popular as he was a decade ago, and it is quite evident why.

Stay home, or watch the Forrest Gump remake that also releases this week. If you really must watch Raksha Bandhan, wait for it to hit streaming platforms - you can skip to the last thirty minutes and be fine with it.
Share. Save. Connect.
Tweet
RAKSHA BANDHAN SNAPSHOT 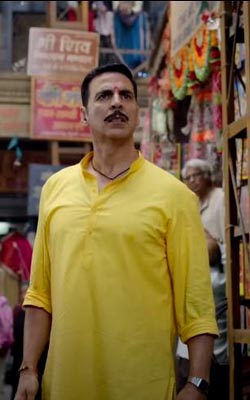 ADVERTISEMENT
This page was tagged for
Raksha Bandhan hindi movie
Raksha Bandhan reviews
release date
Akshay Kumar, Bhumi Pednekar
theatres list
Follow @fullhyderabad
Follow fullhyd.com on
About Hyderabad
The Hyderabad Community
Improve fullhyd.com
More
Our Other Local Guides
Our other sites
© Copyright 1999-2009 LRR Technologies (Hyderabad), Pvt Ltd. All rights reserved. fullhyd, fullhyderabad, Welcome To The Neighbourhood are trademarks of LRR Technologies (Hyderabad) Pvt Ltd. The textual, graphic, audio and audiovisual material in this site is protected by copyright law. You may not copy, distribute, or use this material except as necessary for your personal, non-commercial use. Any trademarks are the properties of their respective owners. More on Hyderabad, India. Jobs in Hyderabad.