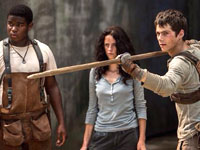 T J Reddy / fullhyd.com
EDITOR RATING
4.0
Performances
Script
Music/Soundtrack
Visuals
4.0
3.0
3.0
7.0
Suggestions
Can watch again
No
Good for kids
No
Good for dates
No
Wait to rent it
Yes
Previously on Maze Runner: Thomas (Dylan O'Brien) was introduced to The Glade by means of The Box. Working with a ragtag group of "supposedly" teen hunks, he manages to evade the super intricate and very derivative Maze. Soon after, the band of teen boys and their female counterpart Teresa (Kaya Scodelario) are airlifted to the vast wasteland known as The Scorch. This is termed "Phase Two" of testing by Ava Paige (Patricia Clarkson).

In The Scorch Trials: The band of Young Adult movie stereotypes are made privy to the fact that the world has been ravaged by the Flare virus. A disease that turns people into zom... um... Cranks. They spend the movie escaping infection, evading WCKD (the token evil government organization), meeting the resistance which is called The Right Arm (because you know what we use the left one for), and getting double-crossed by Janson (Aiden Gillen). At the end of this movie, the group is informed that they are special as they are immune to the Flare virus, and that WCKD needs them to find a cure for the disease wiping out the human race.

At a point in the third instalment of this franchise, we are shown WCKD administer The Maze Trail and The Scorch Trail via a Virtual Reality simulation. You look at the screen and ask: "If you could do this with VR, why did we need the first two parts of this saga? Unlike The Hunger Games, the band of teens isn't motivating a downtrodden group of people to rise up against their oppressors, so why even field-test them and give them a chance to escape if their blood is all that is required?"

Yes, this is a franchise that makes you pay attention to nearly four hours of insufferable jargon and then pay it off with this so-called "finale". I put more thought into continuity than the near 500 people that worked on this movie. Good stuff.

This is but an example. There is more to come.

In The Death Cure, Thomas (not The Tank Engine) rounds up a small band of his buddies to infiltrate WCKD headquarters to break one of the survivors, Minho (Ki Hong Lee), out of captivity. Minho is being used by WCKD to synthesise a cure for the Flare virus. This A-plot is flanked by a zombie uprising, not very engaging political manoeuvring and almost all of the actors phoning in one last performance in an effort to free themselves of their iron-clad contracts.

After putting a bullet through the head of The Hunger Games, The Host, The Divergent series, The 5th Wave, The Giver, Mortal Instruments, the Percy Jackson saga, and most of all The Twilight Saga, Maze Runner: The Death Cure sees Hollywood take its final YA franchise behind the woodshed for one last cash grab. This is the end of Hollywood's obsession with cashing in on teenagers for the foreseeable future, and the genre of movies goes out with a whimper rather than a flourish.

Even if we were to take the movie's ineptitude and overall blandness out of the discussion, the fact that its target audience / fan base has grown out of its teen years is a surefire indicator as to how poorly planned and executed the last installment of Maze Runner franchise is. It does little in terms of acquiring new eyes, and sends away its loyal fanbase (however small it may be) with a parting shot laced with chloroform. I genuinely saw a few teens in my hall fast asleep. I lauded the choices they were making with their time. Sadly, I don't have those privileges.

The cruel twist of fate holding The Death Cure and its actors from producing a truly flourishing finale is how poor a job the last two entries in the franchise have done at generating interest for this climactic installment. Dylan O'Brien, Kaya Scodelario, Thomas Brodie-Sangster and many young actors have grown by leaps and bounds outside the confines of this franchise. Even if their performances in this universe don't inspire much confidence, we can't wait to see these budding talents throw themselves into some experimental and challenging roles in the ilk of Robert Pattinson and Kristen Stewart.

Respected veterans Aiden Gillen (Littlefinger himself) and Patricia Clarkson are nothing more than stopgap actors used to plug up the "gravitas" quota of the film's script whereas Walton Goggins' rendition of The Lord Of The Zombies would have made for some compelling viewing if he were to find himself in a George Romero vehicle.

Speaking of directors named George, the action sequences and visual style of the film mirror those of George Miller's Mad Max. The practical effects, excellent stunt work, smooth shots covering wide open spaces and tight-knit close combat scenes and rich production design deserve a great deal of praise. While the actors aren't given much room to explore the performing aspect, they are allowed to showcase their physicality in action scenes that up the ante at every turn.

The only knock against the movie's visuals comes in the form of its colour palette. Neither the wasteland nor the cityscape offer anything new in terms of world-building, and the choice of having a dark tint over the film is anything but welcome.

A similar argument can be made for the auditory experience the movie has on show. The sounds of tasers, gunshots, helicarriers and more come from the endless bowl of pre-recorded foley sounds, and none of them is as memorable as the one instance of the Wilhelm scream. The background score is nothing more than functional, either. It hits the highs, the lows and everything in between with more of a workman-like quality than an artist's flair.

While we do appreciate our daily worker bees (because most of us are a part of that community), we go to a cinema hall to see an artistic endeavour come to life. The artists who inhabit the cinematic medium are a product of our community, and they are tasked with putting our thoughts and ideas into an easily digestible visual form. The Maze Runner franchise tells a story laced with great ambition and social commentary, but its approach to telling the story is mediocre at best.

This could be forgiven in times past when better works about these topics weren't easily available, but with 1984 available at every bookstore and V For Vendetta's Guy Fawkes mask becoming a universal symbol of revolution, the hiding places for mediocre dystopian stories are few and far between.
Share. Save. Connect.
Tweet
MAZE RUNNER: THE DEATH... SNAPSHOT
MAZE RUNNER: THE DEATH CURE SNAPSHOT 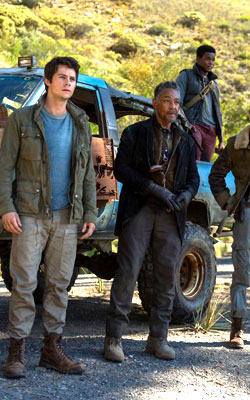 ADVERTISEMENT
This page was tagged for
maze runner the death cure biotech
Maze Runner: The Death Cure english movie
Maze Runner: The Death Cure reviews
release date
Dylan O'Brien, Kaya Scodelario
Follow @fullhyderabad
Follow fullhyd.com on
About Hyderabad
The Hyderabad Community
Improve fullhyd.com
More
Our Other Local Guides
Our other sites
© Copyright 1999-2009 LRR Technologies (Hyderabad), Pvt Ltd. All rights reserved. fullhyd, fullhyderabad, Welcome To The Neighbourhood are trademarks of LRR Technologies (Hyderabad) Pvt Ltd. The textual, graphic, audio and audiovisual material in this site is protected by copyright law. You may not copy, distribute, or use this material except as necessary for your personal, non-commercial use. Any trademarks are the properties of their respective owners. More on Hyderabad, India. Jobs in Hyderabad.