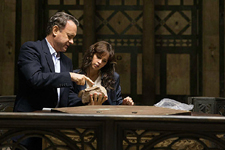 Jaiwantika Dutta-Dhupkar / fullhyd.com
EDITOR RATING
6.0
Performances
Script
Music/Soundtrack
Visuals
8.0
5.0
4.0
8.0
Suggestions
Can watch again
No
Good for kids
No
Good for dates
No
Wait for OTT
Yes
Inferno isn't a film you want to watch if you read a lot - and no, not because it's based on the book. Inferno is essentially a movie that believes in the human right to bulldoze the planet - it recreates a classic existential dilemma, and debates the purpose of intelligence when seen from the larger good, but overall the film's argument falls flat, somewhat.

Symbolist Robert Langdon (Tom Hanks) finds himself in a hospital in Florence with retrograde amnesia and no idea of how he got there. Even as he's fighting to recover, he discovers he's on the wrong side of the law, with the local police and officials from the World Health Organisation gunning for him.

Aided by a kind doctor Sienna Brooks (Felicity Jones), Langdon sets out to unravel the mystery of his recurrent terrifying hallucinations, even as tries to piece his life together and recreate events from his recent past. As his memory begins to slowly return, he begins to see how the worlds of Bertrand Zobrist (Ben Foster), a billionaire transhumanist with a destructive plan to save the world, and he collide.

Dante's Inferno and his Mask Of Death hold more truths for Langdon who must look for clues in Europe's museums to understand the calamity that is to befall the world in the near future. With time running short, Langdon has the world to save and a good story to tell, even though his own life is in danger.

Inferno's climax is a dampener, but the film makes a decent watch overall. If you're a fan of mysteries, then you might enjoy watching this one unravel. The real charm the movie holds for audiences is of an amnesiac Langdon, who is as clueless as the audiences are, solving great mysteries and saving the world. Langdon isn't as much fun once his memory returns. He recognizes the criminals and his ex-girlfriend as well, and things begin to go more than a little downhill after that.

Inferno's also a good tour of Europe's museums, if that's your thing - it takes you up close and personal. The film is also a little medieval in that amidst all the museums and history, even the science is a little old-fashioned. So you have this transhumanist who wants to employ the ol' black plague to "thin the herd", and a quaint bio tube with a carved bone capsule inside. Such old-fashoned cuteness - in the day and age of Anthrax, Swine Flu, and Mad Cow Disease.

Inferno is led by its performances: Tom Hanks is convincing as Robert Langdon, wearing convincingly pained and convincingly lost expressions all through. He makes everything more meaningful just by his sheer presence in every frame. Felicity Jones is alluring, and morphs into the archetypical vamp of yore, but the vamp persona is derailing. Clearly Dan Brown believed in Robert Langdon and only Robert Langdon all through. Ben Foster gives a short but impactful performance. Irrfan Khan is all sarcasm and cunning knife tricks, and makes Indian viewers back home very proud.

Inferno is briskly edited, and that's what makes it riveting - however, even the slick editing can't save its soggy-to-the-bones climax. The cinematography does justice and the direction is about okay.

Don't expect too much of Inferno, for you might be disappointed. Watch it for its good visuals and its performances, and watch it with friends.
Share. Save. Connect.
Tweet
INFERNO SNAPSHOT 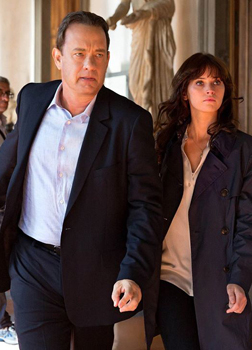 ADVERTISEMENT
This page was tagged for
Inferno english movie
Inferno reviews
release date
Tom Hanks, Felicity Jones
theatres list
Follow @fullhyderabad
Follow fullhyd.com on
About Hyderabad
The Hyderabad Community
Improve fullhyd.com
More
Our Other Local Guides
Our other sites
© Copyright 1999-2009 LRR Technologies (Hyderabad), Pvt Ltd. All rights reserved. fullhyd, fullhyderabad, Welcome To The Neighbourhood are trademarks of LRR Technologies (Hyderabad) Pvt Ltd. The textual, graphic, audio and audiovisual material in this site is protected by copyright law. You may not copy, distribute, or use this material except as necessary for your personal, non-commercial use. Any trademarks are the properties of their respective owners. More on Hyderabad, India. Jobs in Hyderabad.