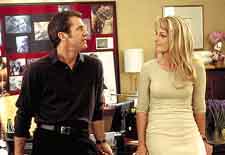 Bhargav Shastry / fullhyd.com
EDITOR RATING
7.0
Performances
Script
Music/Soundtrack
Visuals
NA
NA
NA
NA
Suggestions
Can watch again
NA
Good for kids
NA
Good for dates
NA
Wait for OTT
NA
He has finally arrived. The Mad Max, the man's man, the lethal one, seems to have finally bid farewell to his self-macho image and has, instead, tried to adopt a stance where he pleases the feminist movement by trying to understand what this species really wants. Well, he was tailor-made for the role, wasn't he?

So here goes the transformation. Nick Marshal (Mel) is your typical male of the bygone era. Brought up in Las Vegas with a showgirl as his mother, he has a big hangover of that era where girls were tough, glamorous and did not mind getting a pat on their bottom. Cut to the present where he is a divorced father whose 15-year-old daughter prefers to call him uncle dad, where he is lost in the prudish New World of woman-power where all women share a general opinion about this advertising executive being an 'asshole'.

Then he discovers, courtesy a mishap with an electric dryer, that he can hear what women think. Instead of being repentant about being called an MCP and a 'cocky bullshitter', he puts his 'gift' to good use on the advice of psychiatrist Bette Midler. He steals the ideas of his rival-cum-boss Darcy McGuire (Helen Hunt) and wins a big account for his advertising firm that is struggling to find a foothold in a consumer market dominated by women. He also begins to understand his daughter better and the need for being chivalrous and sympathetic to women's needs.

But he then commits the mistake of falling for his boss. Bitten by the love bug, he confesses to his misdemeanor. She fires him as a co-worker but takes him on as a reformed lover. One realizes here that, in the process of giving contemporary themes a feel-good political correctness, the innovation and ingenuity, and hence the fun, are lost.

Gibson puts up a very credible performance and his transformation is quite smooth. He does sometimes become awkward, especially in the scenes where he is the reformed guy. But Helen Hunt clearly disappoints in a unidimensional character of a nice career girl. She also stays very rigid and tacit, giving herself a performance slump in the process.

Director Nancy Meyers, a woman herself, deliberately tries to bring out that fact amidst the parleys between Hunt and Gibson. Perhaps she wanted to underplay the all-too-obvious contradictions of women power. That's essentially anti-feminist, isn't it?
Share. Save. Connect.
Tweet
WHAT WOMEN WANT SNAPSHOT

ADVERTISEMENT
This page was tagged for
What Women Want english movie
What Women Want reviews
release date
Mel Gibson, Helen Hunt
theatres list
Follow @fullhyderabad
Follow fullhyd.com on
About Hyderabad
The Hyderabad Community
Improve fullhyd.com
More
Our Other Local Guides
Our other sites
© Copyright 1999-2009 LRR Technologies (Hyderabad), Pvt Ltd. All rights reserved. fullhyd, fullhyderabad, Welcome To The Neighbourhood are trademarks of LRR Technologies (Hyderabad) Pvt Ltd. The textual, graphic, audio and audiovisual material in this site is protected by copyright law. You may not copy, distribute, or use this material except as necessary for your personal, non-commercial use. Any trademarks are the properties of their respective owners. More on Hyderabad, India. Jobs in Hyderabad.