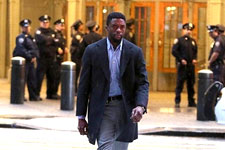 Punarvasu Pendse / fullhyd.com
EDITOR RATING
4.0
Performances
Script
Music/Soundtrack
Visuals
6.0
3.0
5.0
5.0
Suggestions
Can watch again
No
Good for kids
No
Good for dates
No
Wait for OTT
Yes
A couple of minutes into 21 Bridges is a funeral scene, where the priest's eulogy clearly refers to a certain character as an "Avenger". It prompts a raised eyebrow, and sets the scene for what is to follow.

21 Bridges follows the story of Andre Davis (Chadwick Boseman), a second generation detective with the NYPD who has a reputation for being a trigger-happy cop. Upon answering that he felt no remorse when he discharged his firearm in the line of duty, and was only doing what he felt was right, Davis is assigned to a drug bust involving two cop-killers, who are on the run after fatally shooting seven officers and stealing over a hundred pounds of cocaine.

Captain McKenna (J K Simmons) of the 85th Precinct, who has lost his men in the shootout, assigns detective Frankie Burns (Sienna Miller) from narcotics as a partner to Davis, and the hunt is on. Davis gets his higher-ups to cordon off the entire island of Manhattan in order to trap the two fugitives, and for an unfettered investigation. But as he closes down upon the suspects, the detective realises that there is more to this case than meets the eye.

To put it simply, 21 Bridges is a confused film with a rather flimsy script. Making a movie on a sensitive topic like police brutality, especially when black characters are involved, is a delicate exercise. And 21 Bridges is neither here nor there in terms of the stand it takes. It wants to state that the police have their own issues which cause them to act the way they do, but it also wants to be a critique on law enforcement in America at the same time.

One of the first problems is that the main characters cannot get you invested in them. Andre Davis has apparently shot nine perps in eight years as a cop, and his assessment by a police panel early on in the movie should have been that of someone mentally unstable. The only other thing you know about him is that he lives with his mother, and that his dad died while on active duty while dealing with drug addicts - and you are supposed to identify with this character. While this movie can remind you of the Denzel Washington action movies in the 2000s like Man On Fire or The Taking Of Pelham 123, both those movies had more reasons for you to root for the protagonist.

Also, Frankie Burns has little to do but look alarmed, and it doesn't help that the two lead actors have zero chemistry between them.

Director Brian Kirk, who is known for directing multiple episodes of Game Of Thrones, tries to elevate the experience with some slick action scenes - but even these have little innovation. Perhaps the one redeeming fact here is the welcome absence of overdone CGI effects.

New York is the canvas on which this film aspires to paint, and it does offer some cool moments during the scenes where the suspects are being pursued, especially during one exciting foot chase where you are taken on a subway ride.

Chadwick Boseman plays the enigmatic, inscrutable cop who believes himself to be an extension of the law. For a character that has very little to distance itself from the lead in your average cop drama, Boseman makes a valiant effort to keep you invested. Sienna Miller, as we mentioned earlier, has nothing much to do. Stephan James and Taylor Kitsch do a respectable job of being fugitives on the lam, with the former's portrayal of Michael Trujillo inducing more sympathy than the actual protagonist.

The soundtrack composed by Henry Jackman and Alex Belcher is okay, and seems to fit in with the overall mood of this cop drama/thriller. But there is no standout track.

Oh, and the titular 21 Bridges of Manhattan? The only impact their closure has is a mention in the news - you forget about them completely by the end of the film. Not unlike the makers of the movie itself, who had previously titled this one 17 Bridges before they realised that they had forgotten about four of them.

The poster of 21 Bridges has the line "In a city on lockdown, he's the only avenger they can count on". We suspect the makers knew, too, that it would be a hard sell on its own.
Share. Save. Connect.
Tweet
21 BRIDGES SNAPSHOT 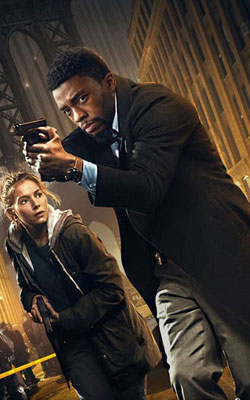 ADVERTISEMENT
This page was tagged for
21 Bridges english movie
21 Bridges reviews
release date
Chadwick Boseman, Sienna Miller
theatres list
Follow @fullhyderabad
Follow fullhyd.com on
About Hyderabad
The Hyderabad Community
Improve fullhyd.com
More
Our Other Local Guides
Our other sites
© Copyright 1999-2009 LRR Technologies (Hyderabad), Pvt Ltd. All rights reserved. fullhyd, fullhyderabad, Welcome To The Neighbourhood are trademarks of LRR Technologies (Hyderabad) Pvt Ltd. The textual, graphic, audio and audiovisual material in this site is protected by copyright law. You may not copy, distribute, or use this material except as necessary for your personal, non-commercial use. Any trademarks are the properties of their respective owners. More on Hyderabad, India. Jobs in Hyderabad.