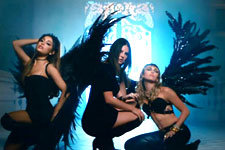 T J Reddy / fullhyd.com
EDITOR RATING
4.5
Performances
Script
Music/Soundtrack
Visuals
6.0
2.0
3.0
5.0
Suggestions
Can watch again
No
Good for kids
Yes
Good for dates
Yes
Wait to rent it
Yes
On David Letterman's new show, Jay-Z said that music had come a long way since his early days as a rapper. Back in his youth, the MC's job was to be the hype-man for the star attraction - the DJ. As time progressed, however, the MC took the spotlight away from the person making the beats. Music was all about the rhymes, the flow, and wordsmanship that would make William Wordsworth say "Word".

This trend stayed on for so long that most music producers had to learn how to write songs to keep themselves relevant. A look back into the pop catalog for the '90s and '00s reveals that mostly male producers wrote songs for Britney Spears, Christina Aguilera and most other pop artists.

But the times are always a-changin'. In a recent interview, legendary music producer Quincy Jones said that the pop music of today has no lyricism. He added that the beats were fresher than ever before, but the words were used to "hype" those beats and not to stand on par with them. And this brings us to the song Don't Call Me An Angel from this film's soundtrack. This song has attained popular status owing to the name recognition of the artists performing it and the beat powering it. When asked about the "significance" of the song, the singers laughed the question away and said that sometimes a song is just a song.

And with that sentiment in mind, Charlie's Angels 2019 is a movie that is just a movie.

It stars Kristen Stewart as wild child Sabina Wilson, Ella Balinska as prim and proper Jane Kano, and Naomi Scott as hacker/scientist Elena Houghlin. Their mission is to stop a bunch of bad guys (and they are GUYS) from misusing a power generator, which Houghlin created with the best intentions. Elizabeth Banks' Bosley leads these women on their warpath.

Banks leads the pack not only in front of the camera but behind it as well. Her previous dabble in directing was Pitch Perfect 2, a perfectly average female-led, a-Capella fueled romp. And her sensibilities with directing a group of talented women carry over to her new project. The characters, while lacking depth, are rarely grating. The movie keeps their stories ticking along by introducing new characters, settings and set pieces into the mix quite frequently. The film rarely, if ever, seems bogged down.

However, this lack of depth and focus is a double-edged sword; much like the one a certain female heroine did when she went on a mission to Kill Bill. Charlie's Angels is what one gets when one applies a Snapchat filter on a tepid script that has lived a full life, died, been resurrected, killed again, summoned as a zombified corpse and then shot in the head for good measure. The filmmakers might think that the filter makes their film funny, spontaneous and random, but that sentiment is as far away from the truth as Kristen Stewart was to the action scenes.

There is an unmissable hollowness to the whole exercise of watching Charlie's Angels. With none of the emotional beats having the impact they should and a good chunk of the comedy falling flat, the audience is left to sift through a stack of needles hoping that a sliver of hay may offer them some respite.

The slivers of hay do come in the form of the leading ladies who seem to be having fun with the material. Ella Balinska, in particular, throws herself into the hand-to-hand combat sequences so much so that the sub-plot she shares with mute assassin Mr. Hodak is simply the most rewarding aspect of the entire film. The care and sub-text present in this sub-plot do more justice to the message of female empowerment than the film surrounding it. And, lest we forget, Patrick Stewart reignites some shades of the character he played in Green Room to significant effect.

These actors and the locales they find themselves in are captured cleverly by Bill Pope's camera. The man who shot The Matrix, Spiderman 2, Spiderman 3, and Scott Pilgrim vs The World knows how to make a movie sequence look exquisite. However, filmmaking is teamwork, and for a team to succeed, every part of it needs to be on the same page. While Ella Balinska does her job, most of the others are more than content with the editors and stunt doubles doing the action for them. The hyper-cut action sequences when inter-cut with a terrible soundtrack (which will most definitely be outdated in a month from today) make for a horrid AV experience from time to time.

As we were alluding to earlier, time is cyclical. As pop music progressed from DJs/producers to singers and back to DJs/producers, female-powered pop action extravaganzas moved from the Charlie's Angels and Lara Crofts of the early '00s to Kill Bill to Wonder Woman to Charlie's Angels again. The only significant difference we could spot between the two iterations of the Angels is that the new one has a welcome reduction of Cameron Diaz's derriere on screen.

This phenomenon proves beyond a shadow of a doubt that the girls can make a middle-of-the-road popcorn cash grab just as well as the boys. And we here at fullhyd.com will critique the men, women, non-binary and transgender folk who work on these movies with the same amount of zest. If that is not true equality, we don't know what is.
Share. Save. Connect.
Tweet
CHARLIE'S ANGELS (HINDI) SNAPSHOT 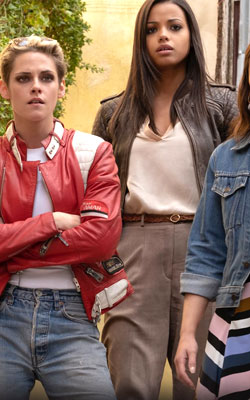 ADVERTISEMENT
This page was tagged for
charlie's angels 3 in hindi
charlie's angels movie hindi
Charlie's Angels (Hindi) hindi movie
Charlie's Angels (Hindi) reviews
release date
Follow @fullhyderabad
Follow fullhyd.com on
About Hyderabad
The Hyderabad Community
Improve fullhyd.com
More
Our Other Local Guides
Our other sites
© Copyright 1999-2009 LRR Technologies (Hyderabad), Pvt Ltd. All rights reserved. fullhyd, fullhyderabad, Welcome To The Neighbourhood are trademarks of LRR Technologies (Hyderabad) Pvt Ltd. The textual, graphic, audio and audiovisual material in this site is protected by copyright law. You may not copy, distribute, or use this material except as necessary for your personal, non-commercial use. Any trademarks are the properties of their respective owners. More on Hyderabad, India. Jobs in Hyderabad.