The Girl on the Train Review 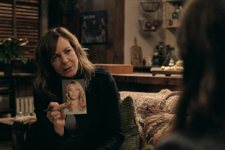 Jaiwantika Dutta-Dhupkar / fullhyd.com
EDITOR RATING
8.0
Performances
Script
Music/Soundtrack
Visuals
6.0
8.0
6.0
8.0
Suggestions
Can watch again
Yes
Good for kids
Yes
Good for dates
No
Wait to rent it
No
The Girl On The Train is an emotionally gripping psychological thriller drama about Rachel Watson (Emily Blunt) who is abused and gaslighted by her husband Tom (Justin Theroux) into believing that she has committed certain acts that have no basis in reality. It also takes a keen look at the human society and psyche, all while solving a rather convoluted mystery.

Rachel's drinking problem, coupled with her sterility and divorce, have changed her as a person. Although she has been unemployed for over a year, she keeps herself busy by taking the train to New York City every morning, keenly observing the view outside her compartment window as they go by, and sketching the people she witnesses in the homes in their purest form. In them she seeks her old self. There, her voyeurism only complements her passion for art as she neatly draws the pretty sights.

One of these pretty sights is Megan (Haley Bennett), an attractive young blonde woman who seems to be everything Rachel wants to be. Rachel often sees her on the deck of her house as the train whooshes by, and sometimes with Megan's husband Scott (Luke Evans). She's inclined to believe that Megan somehow lives the perfect married life. But the fact is that Megan is promiscuous and is sleeping with psychiatrist Kamal Abdic (Edgar Ramirez), while Scott is violent and a control freak.

One day, Rachel spots Megan making out with Abdic on the deck. She gets enraged and is reminded of Tom's own infidelity. Furious that Megan has "destroyed" her perfect idyll of coupledom, cheated on a perfect husband, and "thrown it all away", she binge drinks and decides to give Megan a piece of her mind. But before she can do that, she blacks out and finds herself in Megan's apartment. Later, she finds out that Megan is missing and presumably dead. Her body is later recovered by forensics and they determine that she was pregnant at the time of murder.

Rachel, with her drinking problem can't remember a thing of what transpired that evening. Tom's present wife Anna Boyd (Rebecca Ferguson) is deeply suspicious of Rachel and dislikes having her on the premises as Megan was both Anna's neighbor and nanny to her infant. When Rachel offers to help Scott with the case, Anna is afraid both for herself and for her child.

Rachel's obsessive stalking of Tom, her voyeurism and alcoholism neatly merge with her desire to help Scott crack the case, and to help her own compulsive need to improve her life.

Who killed Megan? Was Rachel involved? The film is about unravelling these.

The Girl On The Train is a worthwhile watch, and makes for an interesting study of the human and also about abusive relationships. This film captures Rachel's dependency as an alcoholic rather well, and her struggle to overcome addiction and feelings of worthlessness is well-elaborated upon. The film, however, takes some trouble in developing its character arcs as it tries too hard to keep the audience in the dark. So the characters don't come across as unidimensional or caricatures.

The movie isn't so much about a 'girl' as it is about three grown women, and their overlapping lives.

Emily Blunt's emoting as the alcoholic and obsessive woman who discovers that she has been fed false memories by her ex throughout her life, is pretty good.

Rebecca Ferguson as the woman with the compulsory desire to keep her marriage going despite her husband's morbid adultery is decent as well.

The film is technically sound and a delight to watch; if you think scenes from a train window might get monotonous after a while, you'd be so wrong.

The film has a fairly simple storyline despite its twists, but the screenplay (Erin Cressida Wilson) and direction (Tate Taylor) make it a worthy of accolades.

The cinematography (Charlotte Bruus Christensen) makes the film visually appealing; the music (Danny Elfman) could have been better; and the editing (Michael McCusker and Andrew Buckland) makes this psychological-thriller-mystery watchable not just once, but many times over.

The Girl On The Train is a great watch this week; it certainly is time well spent.
Share. Save. Connect.
Tweet
THE GIRL ON THE... SNAPSHOT
THE GIRL ON THE TRAIN SNAPSHOT 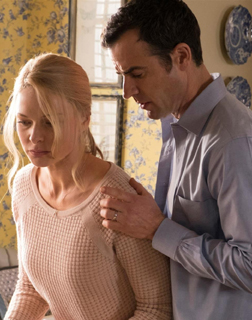 ADVERTISEMENT
This page was tagged for
The Girl on the Train english movie
The Girl on the Train reviews
release date
Emily Blunt, Rebecca Fergusson
theatres list
Follow @fullhyderabad
Follow fullhyd.com on
About Hyderabad
The Hyderabad Community
Improve fullhyd.com
More
Our Other Local Guides
Our other sites
© Copyright 1999-2009 LRR Technologies (Hyderabad), Pvt Ltd. All rights reserved. fullhyd, fullhyderabad, Welcome To The Neighbourhood are trademarks of LRR Technologies (Hyderabad) Pvt Ltd. The textual, graphic, audio and audiovisual material in this site is protected by copyright law. You may not copy, distribute, or use this material except as necessary for your personal, non-commercial use. Any trademarks are the properties of their respective owners. More on Hyderabad, India. Jobs in Hyderabad.