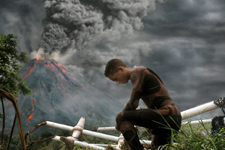 Kritika Deval / fullhyd.com
EDITOR RATING
5.0
Performances
Script
Music/Soundtrack
Visuals
6.0
4.0
6.0
7.0
Suggestions
Can watch again
No
Good for kids
Yes
Good for dates
No
Wait to rent it
Yes
Yeah, yeah. Humans destroyed planet Earth and went off to live on another planet. Been there and seen too many versions of that. The question here is what this team of too many cooks brings to the table that is any different.

Answer: Absolutely nothing, unless you're counting maudlin sentiment that does nothing but weigh down a story that would otherwise have at least been popcorn material.

After Earth sees humanity a thousand years after the planet had to be evacuated, with people cozily settled in their new home of Nova Prime in another solar system. Only, now there are pesky giant insects called Ursas that are being sent to kick them out of their new home.

These things are huge, ugly, and use their prey's fear to see. And the only one who could ever give these creatures a taste of their medicine is General Cypher Raige (Will Smith), who can turn off his fear at will, thus leaving them "blind". However, the General has a son, Kitai (Jaden Smith) who wants to grow up and become just like daddy, but feels that he is a disappointment to his father.

Cypher decides that he wants to "Go On One Last Battle Before He Retires", and as if that isn't ominous enough, he figures that battling lethal creatures that only he can kill would be a good way to sneak in some guy time with his 8-year-old son.

As fate, or unimaginative scriptwriters would have it, their spaceship-thingy gets stuck in a one-in-a-million space storm, sending them hurtling on to planet Earth, which has now, for reasons they don't seem to want to get into, evolved into a planet designed to kill humans. Well, karma sure is a bitch, ain't it?

The ship has crashed, apparently leaving everyone dead except Raige Sr. and Jr. And Cypher's leg is broken. Their only means of communication to their planet, a beacon that looks a ping-pong paddle, is broken, and the only way to be rescued is to get to the tail of the ship, which is about a 100km from the rest of it.

And it's upto young Kitai to brave harsh temperature changes, dangerous wildlife, and a shortage of oxygen (seriously?), and go send a signal from there, with his father navigating him via a handcuff with a screen.

Oh, and did we mention that one of those Ursa creatures is on the loose as well? The morons decided that it would be a good idea to carry it around on an aircraft that looks like it's made from cardboard.

The insanely dull screenplay aside, we feel that their landing on Earth ought to have more significance than it just turning into a sort of a set for Survivor. But perhaps that would be too much to expect from a film in which the protagonists go off into another solar system to fight an enemy that seems to be closer home. Gaping holes in the plot are fine when you have something else to concentrate on (how do you think the Star Trek series turned into a sort of a religion?), but in this case, you have more fun making up stuff to fill them in than watching the movie.

Smith Jr. seems singularly uncomfortable with the amount of time he's had to spend on camera. While he has his moments, for the most part, he just whines, pouts, and does idiotic things like yell "Leave me alone!" at giant leonine baboons while throwing stones at them. You want to feel for this boy and his adventure, but this is a sci-fi flick, for god's sake! 8-year-olds left on their own on deserted and dangerous planets ought to show more spirit than that.

His polar opposite is Smith Sr., who's done away with all expression except a stony look bordering on ennui - if only he'd start yawing, it would mirror the look on your face by the time the movie gets over.

The few bright spots in this plodding tale are the gorgeous CGI and the moody music, courtesy Shyamalan and his flair for drama which gets him into trouble more often than not. We love planet Earth 1000 A.E. (short for After Earth, in case you hadn't already guessed). We love the way fronds curl up in a wave as temperatures drop during the night. We love the gorgeous condor Kitai makes friends with. We love the rustling of the falls and the whistling of the winds. We especially love how Kitai's dead sister wakes him up from his tired slumber.

All of this beauty notwithstanding, any sci-fi fan is bound to be bored by this too-long dressed up tripe served up by Smith & Co. If you're not a sci-fi fan, you're still gonna be bored.
Share. Save. Connect.
Tweet
AFTER EARTH (HINDI) SNAPSHOT 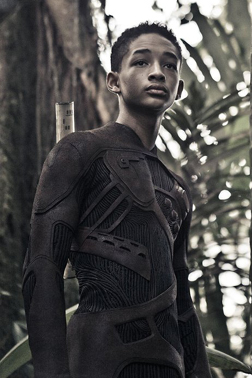 ADVERTISEMENT
This page was tagged for
Download after earth movie in hindi dubbwd
Hollywood After Artha full movie in hindi
after Earth movie in hindi download
After earth full movie download mkv
After earth movie Hindi audio download
Follow @fullhyderabad
Follow fullhyd.com on
About Hyderabad
The Hyderabad Community
Improve fullhyd.com
More
Our Other Local Guides
Our other sites
© Copyright 1999-2009 LRR Technologies (Hyderabad), Pvt Ltd. All rights reserved. fullhyd, fullhyderabad, Welcome To The Neighbourhood are trademarks of LRR Technologies (Hyderabad) Pvt Ltd. The textual, graphic, audio and audiovisual material in this site is protected by copyright law. You may not copy, distribute, or use this material except as necessary for your personal, non-commercial use. Any trademarks are the properties of their respective owners. More on Hyderabad, India. Jobs in Hyderabad.