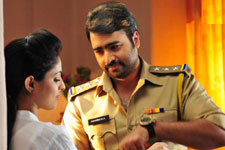 Josh / fullhyd.com
EDITOR RATING
6.5
Performances
Script
Music/Soundtrack
Visuals
7.0
7.0
7.0
8.0
Suggestions
Can watch again
Yes
Good for kids
No
Good for dates
No
Wait for OTT
No
Director Krishna Vijay (debuting with some fine work) believes in poetic expression. We've of late come to look towards Trivikram for anything literary in our cinema. But from his recent outings it appears he's himself not too inclined to looking that way. That leaves us with the likes of Deva Katta (for his searingly well-written Prasthanam) and Krish (for Sirivennela's befuddling "Jaruguthundi Jagannatakam" in Krishnam Vande Jagadurum). Krishna Vijay aspires to join this rather exclusive but increasingly lean clique.

His hero Dharma Teja (Nara Rohit) is a poet. He may be a police officer by profession but his dream is to write and publish his poetry. To get his thoughts and beliefs out there in the open, expressed in words and lines and that intangible device called creativity. This appears to be the director's dream, too. The movie often takes off to poetic interludes with melancholic reflections on the goings on. You may not agree with the content of these lines, but you have to admire the choice of narrative technique.

While he is not reciting poetry, Teja, as the jailer at the Rajahmundry Central Jail, shepherds its inmates. Sometimes driving them back to the herd when they attempt to disperse, sometimes by commenting on the philosophy of reform, and sometimes by sympathising with the stories of the very strayers that he drove back to prison. We're told that he is referred to as "rakshasudu" in the police department for his infamous brutality. However, we see very little of that. We can't be sure if the film did a bad job of communicating it or if we, the Telugu filmgoers, are maxed out with brutality in our films. In either case, you only register Teja as a passionate officer with rather unsettling disregard for the system and its works.

The plot picks up with the arrival of Chandrasekhar alias Charlie (Ravi Varma), a prisoner on deathrow who seems rather convinced that he isn't going to die. It is Dharma's "dharmam" to oversee the execution of this mass murderer. But Charlie has his own plans.

Dharma and Charlie make a fine hero-villain pair in that they are equally locked in the duel. If Dharma is arrogant, Charlie is self-assuredly sinister. If Dharma is fierce, Charlie is unruffled. Charlie exudes such confidence in his attempts to trick death that you worry whether the hero has enough cards up his sleeve.

That is the litmus test of good commercial cinema. We all know what's going to happen in the end. We all know who's going to win. These aren't even Hollywood franchise flicks where they can afford to inflict a tragedy or two on the audiences by killing off one of the dozen protagonists. We have one hero and one heroine, and we can't afford to lose either. We are very aware of these constraints of film viewing. And yet, if the movie makes you sit up and actively indulge in its happenings, it's a clear win.

Asura is taut with a runtime of just over two hours. But its primary failing is that it feels longer than that. You know you're watching a good film, but well into the second half you also begin to tire a bit. By the time the climax arrives, you feel the movie should have ended a while ago. This is perhaps a problem with the rather elaborate ending because in the first half you don't question the film. The interval build-up is in fact quite a smash. And the tug of war in the second half is interesting, too, but by the end the film is so busy dotting all the i's and crossing all the t's that it seems to forget that thing called pace.

Another failing is the seriousness it accords itself. It is clearly commercial cinema you are watching. And there is no reason why commercial cinema shouldn't deal with serious issues or attempt social commentary. However, it becomes difficult when the commentary gets vehement and aggressive. A recurring concept in the movie and in Dharma's poems is the legitimacy of violence for "dushta sikshana" (punishing evil). We've seen these notions earlier in scores of films. Gautam Menon's Gharshana comes to mind, where a cool-as-ice Venkatesh gets interrogated by the Human Rights Commission. We could buy his disregard as a character trait. It is his belief system. Asura, however, insists that this is the only belief system that makes sense. And it seems very earnest in its insistence.

But we shouldn't quibble too much. Asura has so much that makes it recommended viewing. The antagonist Charlie, for instance, is given background. Villains are often meant to be only loathed. Krishna Vijay's writing and Ravi Varma's suave performance get us to loathe him all right, but we also grasp the person Charlie is. Similar is the case with the smaller characters like the executioner who does what he does because he wants to follow in his father's footsteps. Or the petty thief Pandu who turns henchman for the same guy who got him into prison in the first place. These characters aren't templates. They are developed with some care.

Further, poetry also pervades the visuals of Asura. Armed with his cinematographer's talent (the camera is helmed by Vishweswar), the director crafts rather impactful frames. The hanging noose shows up often in spooky angles depicting the morbidity that is being dealt with. Charlie's background contains the most brutal stretch in the movie which ends with the unforgettable fear in victim's face. The titles play with some well-lit shots of hand-puppets of our celebrated mythological figures. Even the item number is quite tastefully done (we hope Krish is taking notes - yes, we refer to that ghastly and unwelcome item number in KVJ).

The hero's romance with Harika (Priya Banerjee) is quite ordinary, but the soundtrack and score (Sai Kartheek) elevate these parts just as they do the rest of the film. These factors and some sturdy performances from Madhusudan, Satyadev, and Vennela Rama Rao add so much to the texture of an already robust script.

Nara Rohit must be congratulated on turning producer, and thanked for choosing to produce a movie like Asura. However, we will point out to the actor in him that if he intends to continue with these heavy-duty action roles, he might have to hit the gym. Or at least burn all those figure-hugging pants.
Share. Save. Connect.
Tweet
ASURA SNAPSHOT 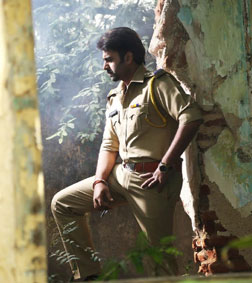 ADVERTISEMENT
This page was tagged for
Asura telugu movie
Asura reviews
release date
Nara Rohit, Priya Banerjee
theatres list
Follow @fullhyderabad
Follow fullhyd.com on
About Hyderabad
The Hyderabad Community
Improve fullhyd.com
More
Our Other Local Guides
Our other sites
© Copyright 1999-2009 LRR Technologies (Hyderabad), Pvt Ltd. All rights reserved. fullhyd, fullhyderabad, Welcome To The Neighbourhood are trademarks of LRR Technologies (Hyderabad) Pvt Ltd. The textual, graphic, audio and audiovisual material in this site is protected by copyright law. You may not copy, distribute, or use this material except as necessary for your personal, non-commercial use. Any trademarks are the properties of their respective owners. More on Hyderabad, India. Jobs in Hyderabad.