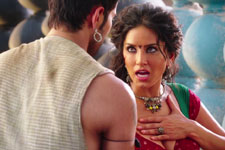 Ravi Kandala / fullhyd.com
EDITOR RATING
3.0
Performances
Script
Music/Soundtrack
Visuals
3.0
3.0
3.0
5.0
Suggestions
Can watch again
No
Good for kids
No
Good for dates
No
Wait to rent it
No
Sunny Leone has had a good run so far. Her films were never superhits, but they must have at least recovered their costs for people to continue casting her. And this has been facilitated to a good degree by the writers consistently finding innovative ways to get her into a bikini or make her shoot intimate scenes. She's been cast as a porn actress, a prostitute, and a police mole who's supposed to seduce a most-wanted criminal, and it's clearly working.

Given that, it's now easy to be sure that the diktat for the writer/director of a Sunny Leone film would be to find ways to fit her into a bikini in the maximum number of scenes possible, and to try and wrangle in some love-making sequences. So for Leela, the writer came up with the idea of a double role - two Sunnys, and so twice the amount of skin show!

The two roles that she plays - a model and a village belle from 300 years ago - are both written to be especially conducive to skin show. The script is heavily influenced by Magadheera, whose Hindi version the writer must stumbled upon one of the 10,000 times it has come on Set Max so far. So they take the essence of Magadheera - lovers separated 300 years ago being reborn - and shoot it in picturesque palaces in Rajasthan. All the while ensuring that Sunny gets to show skin even in the most inopportune of situations.

So Leela is about Meera (Sunny Leone), a super model from Milan who comes to India for a shoot and falls in love with Ranvir Singh (Mohit Ahlawat) and marries him. In a parallel thread, Karan (Jay Bhanushali), a musician from Mumbai, keeps dreaming of Leela (Sunny Leone), a woman from his past. He travels to Jaisalmer to find her and remind her of her past. Is Leela reminded of her past? Does she remember that she was wearing bikini-type clothes even 300 years ago? Does she remember all the insane and weird lovemaking techniques she practiced in the Thar desert in her previous past? Can Jay Bhanushali show more skin than Sunny Leone? All these questions and a few more are answered as part of Ek Paheli Leela.

The film, if you don't have it yet, is an excuse to put Sunny Leone in bikinis and picturesque locations. There are inane situations - like getting Sunny drunk and making her believe that an aeroplane is actually an airport theme restaurant and flying her to India in it. The characters are flat and display as much emotion as a dining table in Falaknuma Palace.

The actors are flatter and show no emotion at all. Sunny Leone speaks Rajasthani and says "Yo humara suhaag hai" like "Yo show some swag". Mohit Ahlawat, Jay Bhanushali, Rajneesh Duggal and Jas Arora go through the motions. There are about 10,000 songs in the movie and they play out at five-minute intervals. They've even remixed and used Dholi Taaro Dhol Baaje. The dance to this number is so mechanical, you can actually hear the 1,2,3,4 of the choreographer during the shoot. The production values are decent, but when a stone statue flaps around like its made from cardboard, cringing is a normal reaction.

Allu Aravind needs to shelve his plans for a Magadheera remake lest someone calls it a remake of Leela. But then, too many people might not see Leela - you certainly shouldn't venture out.
Share. Save. Connect.
Tweet
EK PAHELI LEELA SNAPSHOT 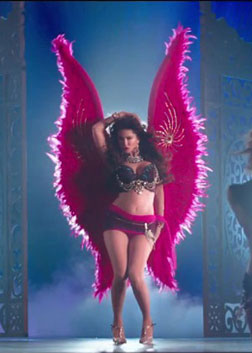 ADVERTISEMENT
This page was tagged for
Ek Paheli Leela hindi movie
Ek Paheli Leela reviews
release date
Sunny Leone, Jay Bhanushali
theatres list
Follow @fullhyderabad
Follow fullhyd.com on
About Hyderabad
The Hyderabad Community
Improve fullhyd.com
More
Our Other Local Guides
Our other sites
© Copyright 1999-2009 LRR Technologies (Hyderabad), Pvt Ltd. All rights reserved. fullhyd, fullhyderabad, Welcome To The Neighbourhood are trademarks of LRR Technologies (Hyderabad) Pvt Ltd. The textual, graphic, audio and audiovisual material in this site is protected by copyright law. You may not copy, distribute, or use this material except as necessary for your personal, non-commercial use. Any trademarks are the properties of their respective owners. More on Hyderabad, India. Jobs in Hyderabad.