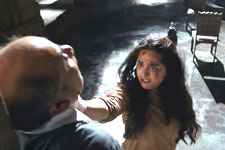 Nah, that's not propaganda we're peddling because of any newfound love for Anushka or such. We're just saying, to be able to be thoroughly entertained by Bhagmathie, you'd better be in love with Anushka.

G Ashok's trilingual (Telugu, Tamil, Malayalam - which explains why all those non-Telugu actors show up on screen) horror-thriller offers very little apart from its lead's loveliness. It isn't that he doesn't try. It isn't even that he fails. He just doesn't quite succeed.

Take that plot, for example. It's like those goofy gifts we wrapped as kids where the recipient peels a layer off to find another layer under it and then peels it off to find yet another and so on, and twenty layers and much amusement later, out comes a Mango Bite (ah, Mango Bite...!).

Only, with Bhagmathie's plot, about twenty layers and some tedium later, out comes the big reveal. And it has no bite.

As is the case with such peelsy plots, we can only give you the first couple of layers, which involve an honest minister (Jayaram), a case of stolen idols from ancient temples, and a Chief Minister who wants the honest minister out. So a CBI officer (Asha Sarath) is assigned to dig up dirt on the minister, in which process she decides to interrogate a jailed IAS officer (Anushka Shetty) in a place that's neither public nor private - a haunted palace of a queen called Bhagmathie.

Yes, the first couple of layers look interesting, which is why we sincerely sat through the film. And also because the scares are kinda nicely done. The producer spent money, and the director made sure it was spent well - the art direction, make-up, sound design, cinematography and such are all a certain degree of competent, which make you sit through the movie - only to slowly realize that the investment was probably not worth it.

Also because Bhagmathie actually tries to be a thriller and not a standard issue horror-comedy, the easy laughs don't come, and G Ashok hasn't (yet) got the craft to work a full-fledged thriller. There are still the few good laughs, few good moments and few good scares, and good as they might be, they are few.

We couldn't be particularly concerned about the generally decent but nothing-extraordinary performances, but we'd like to mention that Dhanraj can be an intense performer. Comedian or no, he has the gravity to hold a frame, and we wish he was given more to do - not just in this film but in general, too.

And no matter her loveliness, Anushka still is a few nautical miles behind Nayantara when it comes to shouldering films and having them work. The latter's recent solo outings like Dora and Aramm (a Tamil film where she plays an IAS officer) are likeable whether or not you like Nayantara. Or maybe she's just choosing the sweet scripts. To like Bhagmathie, though, you'd better be in love with Anushka.
Share. Save. Connect.
Tweet
BHAAGAMATHIE SNAPSHOT 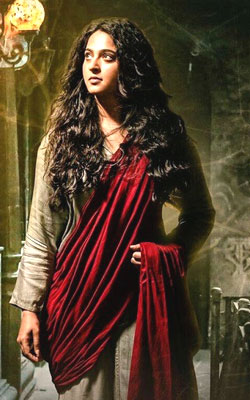 I didn't have much to say, man. Film's boring although it's put together decently. Anushka looks nice. I really wish Dhanraj was hired for a well-written role. There.

Anushka isn't going to go very far, in my opinion. I find her emoting inadequate in the 'powerful' scenes. She holds back like a star-kid. In her comfort zone though, she's very pleasant to watch.
Hari on 28th Jan 2018, 8:31pm | Permalink
I too find Anushka very limited in emoting. BTW, why do our writers/directors keep making actors and actresses shout at the top of their lungs? Absolutely gets on my nerve every time.

I have an analogy for the shouting thing. It's basically like adding extra kaaram to the curry because you're unsure about how to make it well. The kaaram masks and, for the more visceral, entertains.
Sarathi on 26th Jan 2018, 7:31pm | Permalink
Thokkem kaadu. Dora parama dabba cinema. Chetha. Thikka lechindi. English lo Vengence the dog ani cinema vachindi. Aa concept meeda dora theesaaru. Nayantara anushka iddaru goppa actressem kaadu. Stature and looks wise Anushka gives a royal look.
Portuguese Man-of-War on 26th Jan 2018, 8:45pm | Permalink
Nayantara is an award-winning actress.
TJ Reddy on 26th Jan 2018, 7:20pm | Permalink
Josh did you watch Aval? I felt it was super strong on the technical front even if the story was predictable. The presentation made it very likable.
Josh on 28th Jan 2018, 8:52am | Permalink
I didn't, man. Movie watching is a luxury of late. I was Bengaluru last week and I didn't even catch Humble Politician Nograj.

ADVERTISEMENT
This page was tagged for
Bhaagamathie telugu movie
Bhaagamathie reviews
release date
Anushka Shetty, Jayaram
theatres list
Follow @fullhyderabad
Follow fullhyd.com on
About Hyderabad
The Hyderabad Community
Improve fullhyd.com
More
Our Other Local Guides
Our other sites
© Copyright 1999-2009 LRR Technologies (Hyderabad), Pvt Ltd. All rights reserved. fullhyd, fullhyderabad, Welcome To The Neighbourhood are trademarks of LRR Technologies (Hyderabad) Pvt Ltd. The textual, graphic, audio and audiovisual material in this site is protected by copyright law. You may not copy, distribute, or use this material except as necessary for your personal, non-commercial use. Any trademarks are the properties of their respective owners. More on Hyderabad, India. Jobs in Hyderabad.