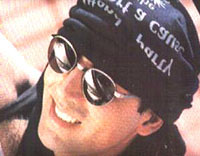 Avishek Gupta / fullhyd.com
EDITOR RATING
5.0
Performances
Script
Music/Soundtrack
Visuals
NA
NA
NA
NA
Suggestions
Can watch again
NA
Good for kids
NA
Good for dates
NA
Wait for OTT
NA
Give me a break, not another Khiladi!! The latest to join the bandwagon of the indisputable Khiladi of all times, Akshay Kumar, is this crooked, or a crook of a movie. Well, what do you expect from a Khiladi? A patchy script (not excepting the best of them) with a suave, fast-talking Akshay performing death-defying stunts with as much ease as you and I would drink coffee at breakfast!

So, we'll take up these elements one by one. First the patchy script that got patchier. The story revolves around Ritu Bharadwaj (Mahima) who is the sole heir to her father's (Alok Nath) wealth. She is alternatively wooed by two shady characters, Dev (Akshay) and Rahul (Sudhanshu Pandey), but no prizes for guessing that the winner is our gabby Khiladi.

What ensues in a not so rare, but wonderful all the same, example of story telling - wonderful because it seems too patchy to come out of one sane head, which it is supposed to have done! However, whatever interest this shady Dev may arouse in you, is quickly dispelled by his look-alike twin, Anand (their parents must be a diehard Dev Anand fan to call their two kids Dev and Anand, or the script-writer was just too lazy to think up a good second one).

This twin takes over from his brother who is suddenly murdered on the night of his marriage to Ritu, and the story loses whatever steam it had. A smattering of villains flit in and out of the story as and when required (and sometimes even when not required) to give our Khiladi an excuse to perform another masala stunt - like the one in which he stands on top of a flying aircraft, and which is already being talked about in all film circles. Great stunt, indeed, but not surpassing what Director Neeraj Vora has tried to pull off with this movie.

As for the second aspect, our man talks faster, is just as suave and his stunts come the closest to giving his chicken fans (if any of them is one) a heart attack. But that ain't enough, this time.

Sandeep-Darshan's music, too, fails to inspire much passion. Much worse, any promotion was conspicuous by its absence. The editing is so loose that we can see the gaping holes right across the movie and some times think this would have been a better movie if probably cut down to half its size!

The festive season release may just about see to its breaking even at the box office, but that does not say anything about the quality of the film, which is pale, apart from a leaping, jumping Akshay Kumar. And to be entirely fair to all the actors, they do a good enough job, including Pandey - a newcomer.

In the end, what more can we say apart from the fact that Neeraj Vora couldn't get any other director to do this venture, and had to go and do it himself! If that doesn't tell you anything, maybe you deserve to go to the movie and find out for yourself. And it's a surprise that he got the Khiladi to do it. Hey, I promise not to use that word again, only if Akshay doesn't do another Khiladi (there I go again), ever.
Share. Save. Connect.
Tweet
KHILADI 420 SNAPSHOT

ADVERTISEMENT
This page was tagged for
khiladi 420 hindi movie kickass
khiladi 420 man 1 movie in hindi
movie khiladi 420 in
Khiladi 420 hindi movie
Khiladi 420 reviews
Follow @fullhyderabad
Follow fullhyd.com on
About Hyderabad
The Hyderabad Community
Improve fullhyd.com
More
Our Other Local Guides
Our other sites
© Copyright 1999-2009 LRR Technologies (Hyderabad), Pvt Ltd. All rights reserved. fullhyd, fullhyderabad, Welcome To The Neighbourhood are trademarks of LRR Technologies (Hyderabad) Pvt Ltd. The textual, graphic, audio and audiovisual material in this site is protected by copyright law. You may not copy, distribute, or use this material except as necessary for your personal, non-commercial use. Any trademarks are the properties of their respective owners. More on Hyderabad, India. Jobs in Hyderabad.