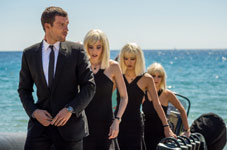 Zehra Abbas / fullhyd.com
EDITOR RATING
4.0
Performances
Script
Music/Soundtrack
Visuals
4.0
4.0
5.0
6.0
Suggestions
Can watch again
No
Good for kids
No
Good for dates
No
Wait to rent it
No
Kindly follow this pre-movie ritual for optimum viewing pleasure of The Transporter Refueled. Remove your brain, deposit said object into a heavy box, drop it into the ocean. You may now proceed to the nearest multiplex. Enjoy the show.

When you purchase tickets for The Transporter films, you know what you're in for. Therefore, it's safe to presume that the main viewers for this film are fans of the franchise who enjoy its no-demands-on-your-IQ-or-EQ high-octane proceedings.

So, let's agree that it's pointless to rant and rave about the dogged resistance of the makers of The Transporter films to try anything remotely cerebral, original or tasteful. Instead, let's focus on whether this film, the fourth in the series, is a successful reboot or not. In other words, "Refueled" or just plain recycled?

Here's what passes for the plot. The get-together of Frank (Ed Skrein) with his recently retired father (Ray Stephenson) is interrupted when a beautiful woman named Anna (Loan Chabanol) hires him to, what else, deliver a package. Turns out that Frank is actually required to deliver three packages - Anna, and her accomplices Gina (Gabriella Wright) and Qiao (Wenxia Yu). A fourth cohort, Maria (Tatiana Pajkovic), takes Frank's father hostage in order to ensure his compliance with their dangerous plan - the women are prostitutes out to destroy the Russian gangster who forced them into the trade.

First things first - does Ed Skrein do justice to the titular protagonist? In short, afraid not. We miss Statham, who brought some semblance of humour and charisma to this one-dimensional character. Skrein looks like a Calvin Klein model (good news), and acts like one (bad news). He's so wooden that he looks like he fell off a billboard onto the big screen. Indeed, despite his youthful good looks, Skrein doesn't come close to Statham's shirtless, six-pack glory.

Skrein's humourless performance is also cramped by the fact that he looks more like a limo driver than an ex-Special Forces soldier. To be fair, he does move like the latter, but even here, Statham's ghost haunts him. The hand-to-hand combat scenes are sorely missing that bone-crunching intensity since he doesn't have Statham's beefy heft. Simply put, and it's baffling that the makers didn't see it, Skrein tries to recycle all of Statham's moves, but he obviously lacks his predecessor's physical presence.

Stephenson does a decent job as dear, old dad, and it's clear that he has been thrown into the mix to recreate the successful father-son chemistry of other action films. Though this element is new to the franchise, it's been recycled from elsewhere. The makers' nod to Indiana Jones is very derivative, to say the least, but their version of the witty repartee of Indy and Jones Sr. is having Stephenson suffix the word "Junior" to every badly written line that he's given.

And then, there are the beautiful women. Yes, there are busloads of them as is the norm in the Transporter films. But the focus this time is on four women, namely Anna and her allies. These poor actresses inadvertently provide a lot of laughs in the film. They claim inspiration by Alexandre Dumas and call themselves The Three Musketeers. Yes, they have literary leanings. There's a scene where the camera focuses on their copy of the book, and believe it or not, it's an abridged version of the novel.

If that doesn't make you collapse laughing, we can discuss their disguises. Now remember, they're on the run from a sinister Russian crime lord. So, Anna, Gina and Xiao all wear identical dresses and identical blonde wigs. A satellite orbiting the Earth would have no trouble spotting those three, blonde heads bobbing about everywhere.

And perhaps a truly evil villain would have caught them. But not Karasov (Radivoje Bukvic), who is as non-descript, and also as menacing as a mangy alley cat. Looking at him, you get the feeling that Frank didn't really need to resort to fisticuffs - he should have just thrown a glass of water at him.

There are other villains, too, but they are so poorly etched that we can't remember them. To sum it up, they are foreigners, with heavy accents and little intelligence. Does that remind you of bad guys from the older Transporter films?

However, if the recycling of the female characters and villains makes you groan, there's one returning cast member who'll make you smile - Frank's Car (played by Audi S8). Watch it catch up with a speeding plane, fly off an airport ramp straight into a passenger boarding bridge, weave in and out of befuddled police cars, and knock off the caps of four fire hydrants with a single swerve. Sigh. We think we're in love.

Finally, let's talk about the action. It's all there - stunts and sequences that require a willing suspension of disbelief, and provide mindless entertainment. Watch Skrein decimate three goons while trapped between two rows of filing cabinets (just another day at the office), or wield a medieval axe, or fly off a jet ski and land feet first into the front seat of the villain's car.

But, and this is why we think this film is more recycled than it is refueled, there's nothing new. It's the same, old stuff unfortunately rendered less believable and less engaging because Skrein is an underwhelming replacement for Statham.

Indeed, Statham has been burned into the collective memory of Transporter fans as Frank Martin, and Luc Besson and Co. need to come up with a new plan if they want to keep this franchise alive without him.

Our advice - refuel your car, and go for a drive instead. 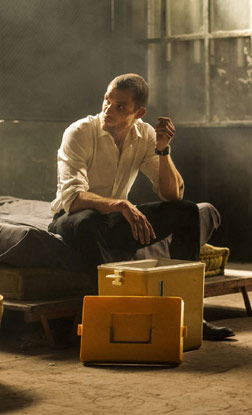 ADVERTISEMENT
This page was tagged for
The Transporter Refueled english movie
The Transporter Refueled reviews
release date
Ed Skrein, Loan Chabanol
theatres list
Follow @fullhyderabad
Follow fullhyd.com on
About Hyderabad
The Hyderabad Community
Improve fullhyd.com
More
Our Other Local Guides
Our other sites
© Copyright 1999-2009 LRR Technologies (Hyderabad), Pvt Ltd. All rights reserved. fullhyd, fullhyderabad, Welcome To The Neighbourhood are trademarks of LRR Technologies (Hyderabad) Pvt Ltd. The textual, graphic, audio and audiovisual material in this site is protected by copyright law. You may not copy, distribute, or use this material except as necessary for your personal, non-commercial use. Any trademarks are the properties of their respective owners. More on Hyderabad, India. Jobs in Hyderabad.