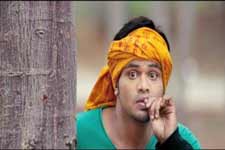 Ravi Kandala / fullhyd.com
EDITOR RATING
4.0
Performances
Script
Music/Soundtrack
Visuals
4.0
3.0
6.0
4.0
Suggestions
Can watch again
No
Good for kids
No
Good for dates
No
Wait to rent it
Yes
Director Maruthi has serious competition. The genre of double-entendre-filled "youth" films that he started could soon be overshadowed and sent to oblivion if Manchu Manoj Babu is given free rein like he is in Potugadu. The first half of Potugadu takes the cake, the bakery, the mall in which the bakery is located, and the city in which the mall is located, for making the hero utter dialogues that are only - and only - about the male reproductive system.

Coming back to Potugadu, the film is about Govind (Manchu Manoj), a vagabond priest. Govind meets Venkataratnam (Posani Krishna Murali) on top of a hillock, where the duo go to commit suicide. They start recounting their reasons for suicide. Venkataratnam has the usual story where his "true love" dumped him for his rich boss.

Govind, on the other hand, has four love stories, each of which has a twist in the end. The first one is with Vaidehi (Simran Kaur Mundi), a girl in his village who he falls in love with and dumps. The second one is with Mumtaz (Sakshi Chowdary), who dumps him for his vagabond ways. The third one is with Stacy (Rachel), a foreigner who is originally in love with Govind's boss. He dumps her too, and then finds true love with Mary (Anupriya). Just when he decides to settle down, life throws a big twist at him.

Now, let's get to the specifics. Including Posani's flashback, the film has a total of 5 love stories. All these are crammed in less than two hours. This should give you a fair idea of how superficial each one of them is.

The stories all start, proceed and end in the following fashion. First, the girls are shown to be traditional, and wear conservative clothes for the two or three scenes that they have where they fall in love with our hero. Each then promptly proceeds to a song where the "conservative" clothes are torn apart to reveal what they were actually wearing (or not wearing) inside.

Immediately after the song, each tale cuts back to the present, with Manoj telling Posani that he dumped the girl. In case of the track with the foreigner, the mandatory conservative clothes in the first two scenes are also dumped in favour of the skin show.

The director of the film had earlier made the superhit (???) Kannada original. His plot may have worked there, but it falls flat here. None of the love stories in the film draws you in, and you really do not care who the hero ends up with. In fact, there are several places where you probably don't want any of the girls to end up with this kind of a guy.

Manoj overacts every bit of the way, and is loud and crass. The boy really needs a director who can control his performance and stop him from imitating his father in every second scene. The fights that he has choreographed are pretty good, though.

The girls in the film are wooden to the core, but even amongst them, Simran Kaur Mundi deserves an award for being the most wooden. Plus, another award for the most Punjabi-looking Telugu Brahmin girl.

None of the girls bothers with lip-sync. They are all primarily used for some skin show, and some more skin show.

Posani is louder than his usual self (yes, we found that it is possible for even Posani to turn the crassness up a notch). The film has several other actors in minor roles, including Ali, Raghu Babu and Chandramohan, but none of them leaves an impact.

The only plus point of the movie is a couple of decent songs scored by Achu. The background score, though good, is extremely loud, and makes you look for the mute button sometimes.

Also, the producers clearly kept the film within a budget, but have managed to extract some good quality stuff from the technical team.

Potugadu is no great shakes. It could appeal to the B&C centres for its double-meaning comedy in the first half, but those wishing for a family outing should stay away.
Share. Save. Connect.
Tweet
POTUGADU SNAPSHOT 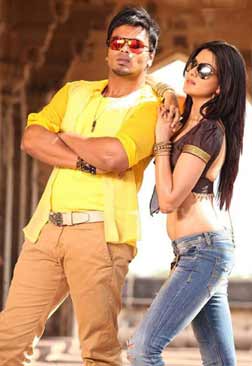 ADVERTISEMENT
This page was tagged for
Potugadu telugu movie
Potugadu reviews
release date
Manchu Manoj Kumar, Sakshi Chowdhary
theatres list
Follow @fullhyderabad
Follow fullhyd.com on
About Hyderabad
The Hyderabad Community
Improve fullhyd.com
More
Our Other Local Guides
Our other sites
© Copyright 1999-2009 LRR Technologies (Hyderabad), Pvt Ltd. All rights reserved. fullhyd, fullhyderabad, Welcome To The Neighbourhood are trademarks of LRR Technologies (Hyderabad) Pvt Ltd. The textual, graphic, audio and audiovisual material in this site is protected by copyright law. You may not copy, distribute, or use this material except as necessary for your personal, non-commercial use. Any trademarks are the properties of their respective owners. More on Hyderabad, India. Jobs in Hyderabad.