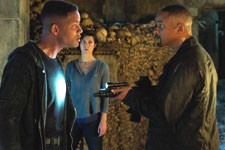 Punarvasu Pendse / fullhyd.com
EDITOR RATING
5.5
Performances
Script
Music/Soundtrack
Visuals
6.0
3.0
5.0
8.0
Suggestions
Can watch again
Yes
Good for kids
No
Good for dates
Yes
Wait to rent it
Yes
Gemini Man should really have come with an introduction. To fully experience it, you need to understand what director Ang Lee is trying to showcase, first.

Ang Lee certainly needs no introduction, but his last project does, perhaps. Billy Lynn's Long Halftime Walk was an expensive dud, but the thing to take here was that it was shot at 120 frames per second (fps), which made it feel jittery and artificially smoothened for a lot of the audience. Lee is back with the same camera, and Gemini Man has also been filmed in 3D at 4K 120 fps - but technology has progressed in the past three years and the director thinks that the world should be able to see his movie the way he envisioned it. Only, the issue with this is that there aren't many cinemas in the entire world that can manage those technical specs, so Lee's is somewhat of a pipe dream.

Gemini Man is a fairly straightforward thriller. Henry Brogan (Will Smith) is an ageing assassin, supposed to be the best in his field, who wants to retire. The shadowy government agency that he works for is not convinced, and has him tailed by Danny Zakarweski (Mary Elizabeth Winstead) - pretty standard procedure for them, until it sends agents out to eliminate Brogan and everyone related to him. Enlisting the help of his pilot friend the "Baron" (Benedict Wong), Henry and Danny escape after an attempt is made on their lives.

Suddenly, it isn't an idyllic retirement for our hitman, and the stakes are about to be raised after a young assassin who has mannerisms eerily similar to those of Brogan himself is sent in to eliminate him by Clay Varris (Clive Owen). Varris had himself trained Brogan in the past, and is now the director of a private army that works with Brogan's ex-agency (which for some weird reason is called the DIA, and not the CIA). It turns out that Junior, the guy sent to kill Brogan, is his own younger self cloned, and we have fireworks.

Gemini Man requires the viewer to lean in, and hard. The plot is paper thin, and almost every twist can be anticipated well in advance, but it is fun in a sort of campy way. A healthy dose of suspension of disbelief and giving in to Will Smith's charms can make it a fun viewing experience. And there's honestly not much to write about the plot here, despite the film being written by an eclectic mix of writers: David Benioff - Game of Thrones, Billy Ray - Hunger Games, Darren Lemko - Shazam!.

Most of the good news is in the performances. Will Smith is showing his age, but is still plenty of fun to watch. The technology that was used to make him look younger is remarkably convincing - but his "younger" face is sharp and chiseled (which probably is good for his confidence, and it certainly looks more regal). Mary Elizabeth Winstead is great - she gets a fair bit of the action scenes and no forced romances, which are a definite win. Benedict Wong injects a dash of humour into every scene he is in, and is wonderful in general. Clive Owen is the exception - he seems to make the same grim, ugly face in most shots, and hardly feels like a noteworthy villain.

The technical aspects of the movie are what are most worth talking about. The film is meant to be seen in 4k 120 fps, which is pretty much impossible in India, but we had the good fortune of being able to watch it in Imax. Mind you, there isn't a true Imax experience in India at the moment - all we have is digital Imax projection, but even that would arguably be a huge difference. I think we watched it at 60 fps, which is still pretty zappy for us viewers that are used to a "cinematic" 24 fps. The action scenes are fun, and the bike shootout and its first person treatment really make you feel like you're inside a video game.

High refresh rate cinema is an extremely polarising issue. On one hand are most people who feel it is disorienting and that the pace feels over-engineered. On the other are people like myself who enjoy it. Without wanting to sound pretentious, a little about yours truly - I play a variety of video games, and happen to own a computer that can run every most of them at 1,440 p 120 fps (which albeit not being 4K, is a higher resolution than the "2K" that 14 premium American theatres could cast).

The point is that you would perhaps be better off watching this visually heavy movie on the smaller screen. Specifically, a 4K high-refresh-rate panel, which I suspect would considerably dwindle most people's options. Maybe catch it at Prasads, which might give you a decent experience, or start finding gamer friends before it releases on the smaller screen.

Or, just give it a miss. I got my Fresh Prince, my tech fix, and my gaming gear. If none of that matters to you, might as well avoid the rains this weekend and curl up with a hot drink, and finish that book you were reading or catch up on that show you wanted to binge.
Share. Save. Connect.
Tweet
GEMINI MAN (HINDI) SNAPSHOT 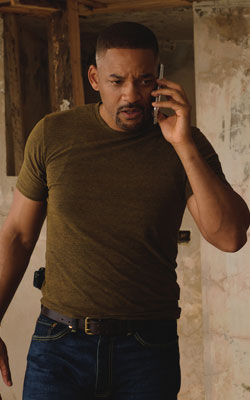 ADVERTISEMENT
This page was tagged for
gemini man movie in hindi
gemini man in hindi
gemini man free movie hindi
gemini Indian movie review
Jamini man in hindi
Follow @fullhyderabad
Follow fullhyd.com on
About Hyderabad
The Hyderabad Community
Improve fullhyd.com
More
Our Other Local Guides
Our other sites
© Copyright 1999-2009 LRR Technologies (Hyderabad), Pvt Ltd. All rights reserved. fullhyd, fullhyderabad, Welcome To The Neighbourhood are trademarks of LRR Technologies (Hyderabad) Pvt Ltd. The textual, graphic, audio and audiovisual material in this site is protected by copyright law. You may not copy, distribute, or use this material except as necessary for your personal, non-commercial use. Any trademarks are the properties of their respective owners. More on Hyderabad, India. Jobs in Hyderabad.