Zehra Abbas / fullhyd.com
EDITOR RATING
7.5
Performances
Script
Music/Soundtrack
Visuals
8.0
6.5
6.0
8.0
Suggestions
Can watch again
Yes
Good for kids
No
Good for dates
Yes
Wait to rent it
No
Take the consummate superstar, someone who has been supping on adulation for breakfast, lunch and dinner for decades. Now imagine him taking on the persona of a crazed fan. Well, Shahrukh Khan digs deep, and he does it well to essay the role of a Fan - one of his best performances in recent years.

Gaurav Chandana (Shahrukh Khan) is a 25 year-old cybercafé owner in West Delhi, and his raison d'etre is Bollywood superstar, Aryan Khanna (Shahrukh Khan). Gaurav bears a striking resemblance to his idol, and has become a celebrity of sorts in Old Delhi's Inder Vihar colony through his impassioned mimicry of Aryan. He travels to Mumbai to meet Aryan on the latter's birthday, but through a strange turn of events is rudely rebuffed by his "God". He returns home, subdued and changed forever, his obsessive love now swapped for an obsessive hatred, and sets an elaborate doppelganger vendetta into motion.

The best part of the film, and the reason you should watch it, is SRK's turn as Gaurav. Yes, we have heard about the make-up and prosthetics and motion capture effects, but make no mistake, it's the actor who breathes life into this construct. Watch him traverse a carefully constructed arc that hooks you to this strange and disturbing character from the get go. Initially, you'll be drawn in by the happy-go-lucky persona, and a touching naiveté unsullied by the schadenfreude that lurks within the most loyal fans. Gaurav's exaggerated reprisal of Aryan's famous dance moves at the local Sitaara Competition, and his beaming joy at winning and being acknowledged as the best mimic of the superstar, are endearing.

But when he risks his life to travel to Mumbai, you get a sense of the frightening pathology that is yet to rear its head. When things go awry, and after a brutal police beating, Gaurav weeps like a child. When Aryan rejects him, and Gaurav experiences a traumatic blow to his sense of self-validation and identity, he stews in the loss for a few days during which his hidden pathology finally breaks through, signalled only by a wan smile. SRK is brilliant in all these scenes.

As Aryan Khanna, he turns in a more restrained performance. He's certainly not playing himself, hence the lack of flamboyance, but there are plenty of oblique references to his life - brawls, performances at NRI weddings, ageing and insecurity. Such courage is surprising, and hopefully a harbinger of more interesting things to come from him. The crucial takeaway here is that SRK does succeed in creating two distinct characters. A standout scene that exhibits the nuances that went into both performances is the first phone call between Gaurav and Aryan.

Director Maneesh Sharma's vision is young and fresh, and he uses the best, and most relevant, aspects of SRK's superstardom, but without being overawed by them at any point. So Aryan's charm is vintage SRK, and Sharma doesn't shy away from capitalizing on it, but neither does he shy away from showing Gaurav rinsing his mouth with the last gulp of his drink and then picking his teeth. Sharma's skill combined with the taut first half of the screenplay by Habib Faisal creates a riveting hour, and you'll check your watch in surprise at intermission.

Sadly, that's not the case once you're back with your snacks. The second half of the film feels oddly different in tone and development from the realistic first half. Gaurav stalks Aryan in Dubrovnik, London and Mumbai, fools thousands into believing that he is Aryan Khanna, and is able to switch off his gauche persona and switch on the polish of a suave superstar at the drop of a hat. Similarly, it's hard to believe that Aryan Khanna would embark on a solo mission to deal with a psychotic stalker. Such implausibility mars what is otherwise an interesting plot.

Also, the tight focus on Gaurav and Aryan gets a bit stifling after a point. It's true that this technique succeeds in creating a pleasing grey landscape of what could have been a black and white story in less capable hands - you are privy to both Gaurav's and Aryan's perspectives, and will be loathe to pick sides. However, a third prism through a talented character actor might have broadened the scope further still.

The production team does a particularly good job with the recreation of old Delhi, and the realism adds a visual layer to our understanding of Gaurav, and his desperation to latch on like a Siamese twin to Aryan's plush Mumbai reality. The film doesn't have any songs, which again is a clever decision since it allows the background score to heighten emotion without intruding on our senses the way an item number would. However, the action choreography, which comprises of mostly long chase sequences, feels oddly out of place in this primarily psychological film that is carried on the weight of its performances.

Fan is certainly not a perfect film, but it's a unique, performance-oriented thriller that explores the twin themes of obsession and identity, more so the latter than the former. Shahrukh Khan fans will watch it anyway to see him essay the roles of the person and the mirror reflection. Viewers who aren't his fans should go to see him push this swivel mirror and confuse you with the revolving images into doubting what is real, and what isn't.
Share. Save. Connect.
Tweet
FAN SNAPSHOT 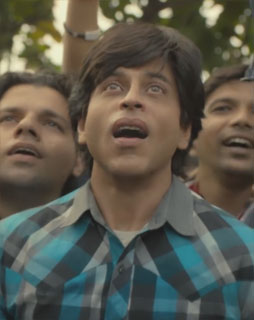 ADVERTISEMENT
This page was tagged for
Fan hindi movie
Fan reviews
release date
Shah Rukh Khan, Waluscha De Sousa
theatres list
Follow @fullhyderabad
Follow fullhyd.com on
About Hyderabad
The Hyderabad Community
Improve fullhyd.com
More
Our Other Local Guides
Our other sites
© Copyright 1999-2009 LRR Technologies (Hyderabad), Pvt Ltd. All rights reserved. fullhyd, fullhyderabad, Welcome To The Neighbourhood are trademarks of LRR Technologies (Hyderabad) Pvt Ltd. The textual, graphic, audio and audiovisual material in this site is protected by copyright law. You may not copy, distribute, or use this material except as necessary for your personal, non-commercial use. Any trademarks are the properties of their respective owners. More on Hyderabad, India. Jobs in Hyderabad.