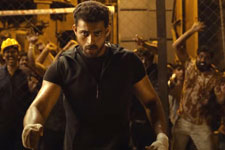 Aditya Devulapally / fullhyd.com
EDITOR RATING
5.0
Performances
Script
Music/Soundtrack
Visuals
7.0
4.0
6.0
7.0
Suggestions
Can watch again
No
Good for kids
No
Good for dates
No
Wait for OTT
Yes
Until the late '90s, we saw Telugu cinema do all sorts of things but never lose its attention to the detailing of a film. Even if the central destiny of the hero was to beat up the arrogant villain in the climax, there was plenty of the banter with friends, arguments at home and fights with his girlfriend. The hero made you believe that he was one of the guys first.

But somewhere over the past couple of decades, Tollywood decided that all a good commercial film needed were a six-packed hero, an eye-candy heroine, a monochromatic villain and a rousing background score from S Thaman. And focusing primarily on that, Ghani falls flat and fails to generate any emotions in you.

After a disgraced boxing champion Vikramaditya (Upendra) leaves his family with a maligned reputation and social derision, his 25-year-old son Ghani decides to become a boxing champion against the wishes of his concerned mother (Nadhiya). Enter Vijayendra Sinha (Suneil Shetty), a past opponent of Ghani's father, who sings endless praises of Vikramaditya's talent and noble intentions. He joins Ghani in training him to become the legend that his father wanted to be. The plot sounds similar to something? Well, Rocky Balboa and Apollo Creed are two very sad men.

Debutante director Kiran Korrapati comes up with an intriguing storyline in Ghani - if you narrate the core plot of the film to a total stranger to sports dramas, you are almost certain to pique their imagination, and might even give them goosebumps. The core idea that poise even in an aggressive sport is the key to victory will resonate almost universally.

However, a lack of detailing makes a promising plot go rudderless, and throwing everything but the kitchen sink at the screen cannot make up for that. Thus, a line-up of big names including Upendra, Suneil Shetty, Jagapathi Babu and Nadhiya fails to be a silver bullet. All of them are left clueless in an aimless narrative.

Out of all the next generation entrants from the Chiranjeevi clan, Varun Tej impressed most where script selection and hunger for content were concerned. Sadly, unlike his previous outings like Fidaa, Tholi Prema and Antariksham, he has no content to offer to the audiences this time.

Except for the 4-minute track Ghani Anthem, which you can occasionally use to fire yourself up in your gym, there's nothing you can take away from this one. 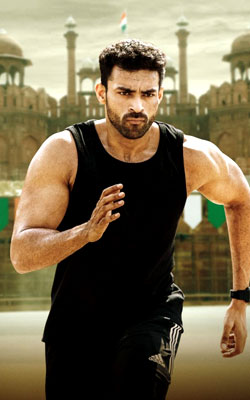 ADVERTISEMENT
This page was tagged for
Ghani telugu movie
Ghani reviews
release date
Varun Tej, Saiee Manjrekar
theatres list
Follow @fullhyderabad
Follow fullhyd.com on
About Hyderabad
The Hyderabad Community
Improve fullhyd.com
More
Our Other Local Guides
Our other sites
© Copyright 1999-2009 LRR Technologies (Hyderabad), Pvt Ltd. All rights reserved. fullhyd, fullhyderabad, Welcome To The Neighbourhood are trademarks of LRR Technologies (Hyderabad) Pvt Ltd. The textual, graphic, audio and audiovisual material in this site is protected by copyright law. You may not copy, distribute, or use this material except as necessary for your personal, non-commercial use. Any trademarks are the properties of their respective owners. More on Hyderabad, India. Jobs in Hyderabad.