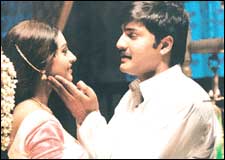 Deepa Menon / fullhyd.com
EDITOR RATING
5.0
Performances
Script
Music/Soundtrack
Visuals
NA
NA
NA
NA
Suggestions
Can watch again
NA
Good for kids
NA
Good for dates
NA
Wait for OTT
NA
There used to be a kind of cinema made a long time ago and it was made for a certain kind of people. Movie-watching to them was something like the eating of a full course meal. They delight in the slumberous setting of the plates, glasses and accompaniments. They know each dish makes its appearance slowly, and they wait, perfectly happy tasting the pickles and crunching bits off the pappad. Such a meal takes a while to prepare, so rushing through it is a sacrilege. Although some of us might have the urge to order pizza. Oh well.

Svarabhishekam is so hugely different from everything else we see on screen today, that it takes a while to adjust to the sensibility of the film. Everything is slower, the songs are not so much inserted as carefully built up to, and characters are sketched with the same soft-leaded pencil that describes the situations. Nobody's a villain, nobody's a hero. Just all-round nice people, and their convictions carved in stone.

The Srirangam Brothers are Telugu music industry's biggest stars and they are your typical happy family. They work as a great team, with the older brother, Srinivasachari (K Viswanath), acting as the rudder and Ranga (Srikanth) as his sail. What can we say, the movie's inspired us to produce mediocre metaphors.

Even though it fairly swims in the stuff, Svarabhishekam doesn't require you to know much about classical music. All the songs - and they are plenty of them - are paced keeping your restless moviegoer in mind. Provided it is an indulgent, restless moviegoer, because for a good bit of the movie nothing major really happens.

Ranga is a widower with two children, and when he meets Surekha (Laya), everyone agrees they make a perfect match. It's only after Surekha enters the family that the applecart is tilted. Thanks to her and other apparently jobless people, Ranga is convinced that his brother is growing senile and unreasonable. In a fit of rage, he orders the older man and his wife out of the house. The story then follows Ranga's journey for forgiveness.

The movie has some refreshingly well-defined characters, like Sridhar, who plays a longtime fan and well-wisher of the Brothers, and Sivaji, a musician on the way up, who also attaches himself to the illustrious duo. All the actors do justice to their roles, but Srikanth perhaps takes the cake with the climax.

The whole feeling of the movie is that of a wholesome family drama, the kind that DD produced for Sunday evening viewing. Comparisons with K Viswanath's Sankarabharanam are inevitable, but misplaced. Svarabhishekam is just as committed to music, but it lacks in that ability to draw out the essence of human foible. The effort is too meandering to hold interest throughout, but it helps if you're feeling generous. And a bite nostalgic.
Share. Save. Connect.
Tweet
SWARAABHISHEKAM SNAPSHOT

ADVERTISEMENT
This page was tagged for
Swaraabhishekam telugu movie
Swaraabhishekam reviews
release date
Srikanth, K Viswanath
theatres list
Follow @fullhyderabad
Follow fullhyd.com on
About Hyderabad
The Hyderabad Community
Improve fullhyd.com
More
Our Other Local Guides
Our other sites
© Copyright 1999-2009 LRR Technologies (Hyderabad), Pvt Ltd. All rights reserved. fullhyd, fullhyderabad, Welcome To The Neighbourhood are trademarks of LRR Technologies (Hyderabad) Pvt Ltd. The textual, graphic, audio and audiovisual material in this site is protected by copyright law. You may not copy, distribute, or use this material except as necessary for your personal, non-commercial use. Any trademarks are the properties of their respective owners. More on Hyderabad, India. Jobs in Hyderabad.