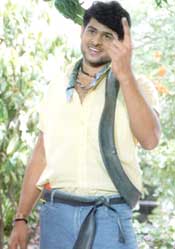 Here's calling all do-gooders, go-getters, bed-wetters, trailblazers and trendsetters to watch a movie that tries to be everything to everybody. Eshwar succeeds, but in bits and pieces, spurts and bursts. But on the whole, no complaints.

It almost looks like Eshwar's makers started off with a to-do list and kept ticking one task off after the other. The list reads something like: Draw teenyboppers with rich-girl-poor-boy love story. Appeal to working class with the 'fight for the underdog' tone. Attract womenfolk with sentiment in the form of stepmother. Lure Hyderabadis by showing a flattering image of the city. Impress the trendsetters with unusual timing by hitting theaters with a matinee on a Monday.

Despite some cinematic flab in several places, Eshwar isn't a bad bet for a weekend, especially with so many eminently avoidable movies hitting the theaters every Friday. It is the debut vehicle of Prabhas, actor Krishnamraju's nephew, and actress Manjula's daughter Sridevi. The newcomers have neatly etched out roles and couldn't have asked for more.

The movie is set in Dhoolpet, the hotbed of gudumba (illicit liquor) and Ganesh idols. Eshwar, son of a gudumba seller and a doting father, leads a chilled out life with his bunch of cronies. The first leg of the movie is straight out of a 'day in the life of a Hyderabadi', and has been captured brilliantly. Essentially Hyderabad! 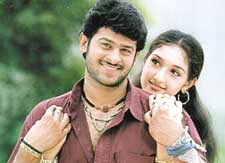 Eshwar's life goes for a toss after he sets sights on Indu (Sreedevi), a bike-riding, cell phone toting rich girl. An hour of juvenile romantic overtures later, Eshwar realizes that Indu is the daughter of the local MLA (producer Ashok Kumar), and she too reciprocates his feelings. Now you get the drift. The 'what the helling' sessions by the MLA and the mandatory 'I can elope with your daughter, but won't' sequences eat up a chunk of screen time.

Getting married is the single point agenda of the girl and the boy, and that definitely annoys not just the MLA but the audiences too. For God's sake, the guy and girl have barely exchanged hellos, sorrys and thank yous, and they are already vowing life long commitment! Bah!

The battle for love assumes bigger proportions when it takes the 'working class versus political class' hues. Indu's dad uses his clout to harass the gudumba workers, puts Eshwar behind the bars and hides his daughter in some godforsaken place. It's then Eshwar's stepmom Sujatha (Revathy) who takes up the cudgels against the MLA and stakes her life to help her son. She also mobilizes the whole of Dhoolpet to help the boy and girl reunite. Triumph of true love over the bloody money power, so to speak! The climax has all the mandatory elements of blood, gore, stunts, chases etc. that any self-respecting Telugu movie would have.

Even though the love story is rather juvenile and half-baked, it has its moments. Like when the girl asks 'Eshwar, who? I don't even know the name of the guy I love,' halfway through the movie. The comic capers at the cyber café and the college laboratory too are sweet.

Prabhas, with his ragged look, may not impress you at first but slowly grows on you. His 'abbey chal hut' attitude gels with his physique. Telugu audiences fall hook, line and sinker for actors who can talk and floor them. If he wants to set his sights bigger in Tollywood, he needs to overcome his drunken drawl. He suffers from 'performance anxiety' in some moments, but on the whole he's leagues ahead of several other newcomers as he looks rather cool with the camera.

Sreedevi does a decent job too, but whether she will be able to withstand the 'Bollywood bhamalu' in terms of sheer glamour is debatable. Revathy, needless to say, underscores her presence.

ADVERTISEMENT
This page was tagged for
Eeswar fim
Eshwar movie verdict
Prabhas Eshwar photos Ishwar Prabhas
?????? ?????? ????
?????? ?????? ????
Follow @fullhyderabad
Follow fullhyd.com on
About Hyderabad
The Hyderabad Community
Improve fullhyd.com
More
Our Other Local Guides
Our other sites
© Copyright 1999-2009 LRR Technologies (Hyderabad), Pvt Ltd. All rights reserved. fullhyd, fullhyderabad, Welcome To The Neighbourhood are trademarks of LRR Technologies (Hyderabad) Pvt Ltd. The textual, graphic, audio and audiovisual material in this site is protected by copyright law. You may not copy, distribute, or use this material except as necessary for your personal, non-commercial use. Any trademarks are the properties of their respective owners. More on Hyderabad, India. Jobs in Hyderabad.