Hawayein, winds, is dedicated to all the victims of Operation Blue Star and the riots of 1984. Someone forgot to include the viewer. Set amidst a backdrop that can inspire the most insipid of filmmakers to come up with masterpieces, Hawayein seems to prove that there are certain exceptions that prove the law - not the last of which is that bad actors have to direct their own films.

Sarabjeet Singh is an aspiring painter who, for some obscure reason unknown to humanity, is studying M. A. Music. The day before joining Delhi University, he dreams of some lass and paints her. As we have been trained to expect by now, he meets Muskaan on his first day at college. Muskaan turns out to be his sister Rani's friend. Now, why didn't Rani tell him that when she saw the painting?

Anyway, for the next half an hour (it seems to last an eternity) or so, we are shown the courtship of Sarabjeet and the song and dance rituals for Rani's wedding. Then Mrs. Gandhi is assassinated and the riots hit Delhi. Barring Sarabjeet, his granny and his love interest, everyone is wiped out.

His granny and Sarabjeet move to Punjab where he takes to farming and tilling the family land. One day terrorists take refuge in their home, and the Police arrest Sarabjeet on suspicion. Owing to Police excesses, Sarabjeet takes up arms and joins a gang of people headed by his college pal, Kanpuria, to hunt down the terrorists and bring them to justice.

Kanpuria falls into police hands, and to secure his release, the gang kidnaps the Swedish Ambassador. Sarabjeet narrates him his tale of woe. The Ambassador is overwhelmed and vows to help him tell it to the world. A case of the Stockholm syndrome?

Kanpuria is released. This gets the terrorists really upset, and along with the sinister 'foreign hand', they plan on massacring a spiritual leader along with his followers on his Padyatra. Sarabjeet and his men do not let them succeed, but only at the cost of their own lives. Muskaan survives to tell the tale to the whole world in the form of a book. 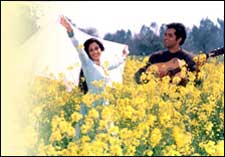 The film does have some scenes that are heart-rending, but they are so few and so far between that all they do is wake you from your reverie, and by the time you shake those cobwebs off your brain, fresh ones have grown to take their place. However, the background score is really surreal and innovative - unless you know of this group called Enigma and have heard the song 'Principles of Lust'.

All in all, the film tells you that appearances can be deceptive, especially when it comes to promoting movies.
Share. Save. Connect.
Tweet
HAWAYEIN SNAPSHOT
See Hawayein full details
HAWAYEIN USER REVIEWS
1 - 7 OF 7 COMMENTS
POSITIVE  |  NEGATIVE |  NEWEST  |  OLDEST  |  MOST HELPFUL  |  LEAST HELPFUL
USER RATING
9.2
89 USERS
Performances
Script
Music/Soundtrack
Visuals
NA
NA
NA
NA
Can watch again - NA
Good for kids - NA
Good for dates - NA
Wait to rent it - NA
Sukhvir Sidhu on 19th Dec 2004, 6:13am | Permalink
i can not explain in words.
RATING
10
Parm Kaur on 23rd Oct 2003, 8:20am | Permalink
The best movie I've ever seen. Excellent! And this goes out to all those who hate the movie - TRUTH HURTS BI-ATCH!
RATING
10
Arvin Singh on 16th Sep 2003, 3:38am | Permalink
ATTN: This review reveals the movie content.

RATING
4
G Dhami on 13th Sep 2003, 12:24pm | Permalink
Seems like the main review for the film is copy and pasted a few times. You all need to check your sources and say how it is not a copy and paste.

ADVERTISEMENT
This page was tagged for
hawayein full movie recap
hawayein movie review
Hawayein hindi movie
Hawayein reviews
release date
Follow @fullhyderabad
Follow fullhyd.com on
About Hyderabad
The Hyderabad Community
Improve fullhyd.com
More
Our Other Local Guides
Our other sites
© Copyright 1999-2009 LRR Technologies (Hyderabad), Pvt Ltd. All rights reserved. fullhyd, fullhyderabad, Welcome To The Neighbourhood are trademarks of LRR Technologies (Hyderabad) Pvt Ltd. The textual, graphic, audio and audiovisual material in this site is protected by copyright law. You may not copy, distribute, or use this material except as necessary for your personal, non-commercial use. Any trademarks are the properties of their respective owners. More on Hyderabad, India. Jobs in Hyderabad.