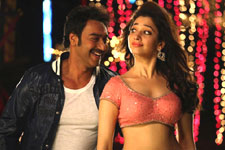 Kritika Deval / fullhyd.com
EDITOR RATING
3.0
Performances
Script
Music/Soundtrack
Visuals
4.0
2.0
5.0
5.0
Suggestions
Can watch again
No
Good for kids
No
Good for dates
No
Wait to rent it
Yes
Sajid Khan had better get all the money he probably has stashed in overseas accounts to make good on his promise. The one he made of refunding the tickets if his audiences don't like Himmatwala.

But then, dear viewer, you had to see it coming. A "fun" Sajid Khan remake of all that was wrong with cinema in the '80s can be nothing but an exercise in having fun at the expense of its audiences.

As if this wasn't bad enough, once every half hour, regular as clockwork, someone or the other says "Himmatwala!" in a booming voice.

And, then comes Himmatwala, with its ridiculous story of revenge, mistaken identities, and a complete disregard of the development even of characters flat enough to skate on.

It goes like this. The Evil Sarpanch (Mahesh Manjrekar) kills off the hero Ravi's (Ajay Devgn) father. Orphaned, Ravi turns to the Big City, only to come back years later to support his mother and his sister, and to avenge the death of his father.

Then there is Rekha (Tamanna Bhatia), the Evil Sarpanch's Evil daughter, who's Evil garib-hating soul is snatched from the fires of hell, just as the hero snatches her from the jaws of a tiger. No, really, there's a tiger. It looks just like the one from Life Of Pi.

And, all it takes to make it see the error of its villager-eating ways is a punch from Ajay Devgn's fists of titanium. We'll leave the pedestrian iron to the likes of Jeetendra.

Ajay's fists, and his fake growl, which he insists on speaking in throughout, pretty much take over the rest of the film.

Oh, lest we forget, the item numbers. Lots of hyperactive bosom, glitter, flesh spilling out of inadequate costumes - just the way item numbers should be, and were, before the '90s came along and ruined them.

The acting is perfunctory, almost superfluous. What is commendable is the actors' ability to speak their lines with perfect equanimity, without spending their screen time rolling on the floor laughing. Paresh Rawal has a ball. You will enjoy every moment of screen time that he occupies.

The music will do just fine in wedding bands of the coming future. The visuals, the costumes and the sets do a great work at embodying the spirit of the '80s, and are actually really impressive.

Verdict: Himmatwala is complete, unapologetic bunkum, with not even the excuse of wit to redeem it. There's only so much you can laugh at the ridiculousness of it all. The rest of the time will be spent in utter boredom, and figuring out how to get your money back.

And now, we must go call our henchmen and get them to go after the director.
Share. Save. Connect.
Tweet
HIMMATWALA SNAPSHOT 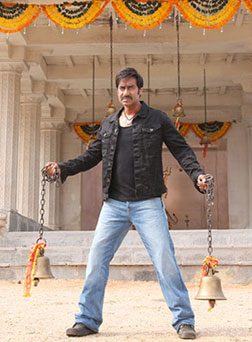 ADVERTISEMENT
This page was tagged for
Himmatwala hindi movie
Himmatwala reviews
release date
Ajay Devgn, Tamannaah Bhatia
theatres list
Follow @fullhyderabad
Follow fullhyd.com on
About Hyderabad
The Hyderabad Community
Improve fullhyd.com
More
Our Other Local Guides
Our other sites
© Copyright 1999-2009 LRR Technologies (Hyderabad), Pvt Ltd. All rights reserved. fullhyd, fullhyderabad, Welcome To The Neighbourhood are trademarks of LRR Technologies (Hyderabad) Pvt Ltd. The textual, graphic, audio and audiovisual material in this site is protected by copyright law. You may not copy, distribute, or use this material except as necessary for your personal, non-commercial use. Any trademarks are the properties of their respective owners. More on Hyderabad, India. Jobs in Hyderabad.