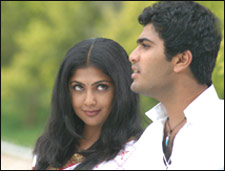 There's more where that came from. And it all sounds good.

Gamyam falls somewhere between what Mee Sreyobhilashi was and what it could have been. A person's perspective changing completely in a couple of days is heavy material, one of the toughest scripting challenges. If it's done well, at the end of the movie you'll feel like the beginning was so long ago, even if the film lasts the standard 2½ hours.

Gamyam does not altogether manage it, but it's still a story well told. If you chose to treat it as a romance, it has the ingredients - a heroine with character (and an excellent actress in Kamalinee Mukherjee), sizeable footage for the courtship, good songs with creative picturization rather than meaningless dance, a brief estrangement and the always-appetizing getting back.

There's however a deeper layer of a man's world-view changing, and it has some good lines even if not the best of conceptualization, and in general shows more intelligence than an average - or even above average - Telugu film.

Abhiram (Sarvanand) is the son of an obscenely rich businessman, and does what any self-respecting son of an obscenely rich businessman would do - get wasted on partying. However, when he falls in love with the kind-hearted medico Janaki (Mukherjee), he has to work hard to win her heart since she is interested more in what he is without his wealth and status. Which is basically nothing.

However, love is blind and so can see nothing (get it, get it?), and so she warms up to him. Unfortunately, she soon realizes he cannot appreciate her zeal for helping disadvantaged people and actually repudiates it, and so walks out of his life. Abhiram however cannot live without her, and starts off on a journey to trace her and win her back.

Now every journey needs a mode of transport, and Abhiram's super-swanky bike attracts some unwanted attention.

It's hard to imagine how watchable Gamyam might have been without Allari Naresh. He's increasingly a delight to watch, and no one complains that he has a release every week, and sometimes five (fullhyd.com in fact has just started a special Allari Naresh practice to deal with the increasing workload - please apply). If Kamalinee Mukherjee lends class to Gamyam, Naresh lends mass.

Seenu is a person who sells bikes for a living - usually others', and without their knowledge. Many people would call him a thief, and he agrees, so at least there's no dispute there. He tails Abhiram for a long while on the pretext of trying to help him, but becomes a loyal friend when the latter makes a completely unexpected gesture towards him, and offers to help out in tracing Janaki in return for 2 meals a day.

The duo then travel through the Andhra hinterland running into a variety of people and experiences including a school for the underprivileged, a bunch of local thugs, a woman in labor stuck in a traffic jam, a street performance by a travelling dance company, and even naxalites (which incidentally has some pretty well-written dialogues).

Gamyam is fundamentally a romcom, and an entertainer at that - you can watch it giggling selflessly, and leave detachedly when it's over, stuffing the popcorn cover into the seat's crevice. How many layers you find in Gamyam, however, depends on what all is etched in your own mind. The difference between a movie and real life is the happy ending. There's a payoff in movies for becoming a nice person - in life, you can keep getting nicer and nicer, hoping that Someone will notice and give you what you badly want. The truth is either what you already know, or hopefully will never have to find out.

Kamalinee Mukherjee is perhaps the only actress in Telugu aside of Genelia with memorable roles - it's a pity she's making noises about turning "glamorous". Sarvanand does a good job of being the silent and purposeful young man, and you watch with delight as he turns over a new leaf - money and goodness is a potent combination, and there's nothing like changing an unfortunate person's life with a wad of notes. Yes, rich people have it all, including the greatest power to bring happiness to others.

Naresh is the life of the film as the hyperactive and talkative Gaali Seenu. He's coming into his own pretty fast now, a Bankable Star - people actually whistle when he first comes on screen. It can't be just EVV's efforts that he's reached that stage.

The few songs in Gamyam are all melodious, lyrical and good to watch on screen - they're more about emotions than choreography, and shot in poetry rather than in prose.

Gamyam is a good film after a long while. For best results, watch it before you become obscenely rich.
Share. Save. Connect.
Tweet
GAMYAM SNAPSHOT

See Gamyam full details
TOP COMMENT
yrsandeep on 22nd Apr 2008, 1:37pm | Permalink
After sekhar kammula's movies in telugu this is one of the recent movies which has some substance in it.Though i am not well aware of the technicalities, the song by sirivennala stands out with loads of meaning compressed.Felt really good after listening to the song.

coming to the movie i feel that though the transformation of the hero as he makes his journey has been well portrayed the triggering of this transformation could have been handled better.

There are some very good dialogues that would make people think.

The character of brahmanandam showing the nature of general public who take no action but just criticize has been well depicted and aims at pricking the public to awake.


Pros: Dialogues, story, mu
Cons: None
RATING
9
yrsandeep on 22nd Apr 2008, 1:37pm | Permalink
After sekhar kammula's movies in telugu this is one of the recent movies which has some substance in it.Though i am not well aware of the technicalities, the song by sirivennala stands out with loads of meaning compressed.Felt really good after listening to the song.

coming to the movie i feel that though the transformation of the hero as he makes his journey has been well portrayed the triggering of this transformation could have been handled better.

There are some very good dialogues that would make people think.

The character of brahmanandam showing the nature of general public who take no action but just criticize has been well depicted and aims at pricking the public to awake.
RATING
7
pradeepjj on 21st Apr 2008, 11:10pm | Permalink
Absolutely agree with Maharishi...a great to watch after some time. The transition that is shown in the main character is perfect..We generally find characters changing their nature just in the climax or after huge dialogue deliveries. This was pleasantly different.
Travelling, they say, opens ones mind to others. Aptly shown in the movie..

I thank all those expressed their views on Gamyam. Now you will wonder why? In the current situation good and meaningful movies are nerver seen but, this movie falls into this group. I agree the director did a brilliant work but the song written by sastry garu (sirivennela) speaks louder than the movie.

The script work is brilliant and the screenplay was excellent.The feel of watching a great movie was never down for 2 hrs.

For movie enthusiasts this is a great treat. I always prefer good movies with great technicalities, excellent screenplay, good acting and having something to carry home. Truely speaking i have found all these qualities in very few films and these not even a single movie.But, gamyam has all the qualities.

Truely speaking the lyrics of sastry garu have a great impact on me, which are reflected in the poems i write. But, the song of

has literally changed the way i see my life.

The directors who have brilliant ideas and start offf with a great movies at times fall prey to the vicious cycle of making movies with those big starts who doesn't allow directors to do their work and make the script spoil. I wish RADHAKRISHNA shouldn't come under these section of directors. Any ways shaould be carefull as his nextproject itself is with a bigstar and aswani dutt.

The subject which the director has selected is a very huge and new subject. But the efforts made to fit that subject to few pages of script and converting it into few reels has paid off.

If the pleasure of a brilliant creation is restricted to only a few people because it's in their language, then it's fair that such a creation be translated into languages that other people understand as well. Language there is a metaphor for customization to reflect the sub-culture of that audience, which is essential for them to appreciate its brilliance. The key is to the "inspired" creation radiates the same brilliance of the original. In the case of Gamyam, it does, in parts. In Ram Gopal Varma ki Aag, it didn't. That's the difference.

@ Portugese: Producers make formula-movies because audience likes them. Audience likes formula-movies because producers only make those. Egg or Chicken? Happy Days - a plotless story depicted by amateurish performances - turns out to be the highest grosser of last year. With all due respect to the movie, is that the best we can do? I hope not! Do we remember the last time a "critically-brilliant" movie flopped? We don't.

Because Telugu movie-makers stopped making brilliant movies. So, just an attempt at making a half-decent movie is enough here to make it a hit - take Gamyam for instance. But I don't blame the producers for this stagnation. All the so-called big-banner producers have already had colossal failures sticking to formula flicks. Ashwini Dutt, Allu Arvind, MS Raju, Suresh Productions, Dil-Raju, Super Good Films - you name him, he's taken a hammering.

At this juncture they'd be more-than-willing to invest in low-budget flicks which may turn out to be another Happy Days. Given the relatively low capital expenditure, this is a venture worth investing in. Invest-more to gain-more does not seem to be working well for the industry. So try investing-less. You only have less to lose.

So if you have a terrific script, and you can market yourself decently, you can not only find a producer, but also have a good movie, all with the expected ROI. The problem here is an apparent, very worrying, dearth in writing talent in the industry.

Another feature of Telugu cinema which is not being utilized to its potential is the blind adulation of the stars. Chiranjeevis and Bala Krishnas are not blind or deaf or stupid. They know they're old. They know that they should've retired. But they know, more than anything, that their fans still want them to act. It's very tough to walk away from that much love. And that's a terrific situation to be in. They should use this following to educate the "masses" with sensible, if not arty, cinema. By educate of course I don't mean to eradicate corruption or some such lofty agenda. Educate them in understanding good cinema. Their philosophy of sticking to "mass" flick is not doing good for them or their fans - since there's no the "mass" movies also flop phenomenally.

ADVERTISEMENT
This page was tagged for
gamyam telugu full movie
gayam full telugu movie
andalalo general general dialogue
Gamyam telugu movie
Gamyam reviews
Follow @fullhyderabad
Follow fullhyd.com on
About Hyderabad
The Hyderabad Community
Improve fullhyd.com
More
Our Other Local Guides
Our other sites
© Copyright 1999-2009 LRR Technologies (Hyderabad), Pvt Ltd. All rights reserved. fullhyd, fullhyderabad, Welcome To The Neighbourhood are trademarks of LRR Technologies (Hyderabad) Pvt Ltd. The textual, graphic, audio and audiovisual material in this site is protected by copyright law. You may not copy, distribute, or use this material except as necessary for your personal, non-commercial use. Any trademarks are the properties of their respective owners. More on Hyderabad, India. Jobs in Hyderabad.