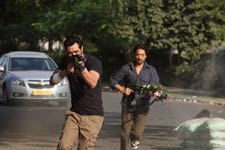 Neha Mathur / fullhyd.com
EDITOR RATING
7.0
Performances
Script
Music/Soundtrack
Visuals
8.0
7.0
9.0
8.0
Suggestions
Can watch again
Yes
Good for kids
No
Good for dates
No
Wait to rent it
No
Cinema-goers, on a gluttonous diet of crime thrillers, are overfed with badass, gangster flicks (read grim tales of lawlessness and terror), and might sidestep this one for lighter fare. Well, dear cinema-goer, you might want to rethink your decision.

Replete with the magic of everyday life and its tragic disruption, scarred individuals who live on the margins, and the agony of sacrifice, this film will move you even though its genre requirement dictates that it is only meant to thrill you. Though, ultimately, what lets down the film is its end, which grates on the ear much like a simplistic sermon.

We dive into the script in media res, amidst wedding festivities in a Karachi hotel set to the jubilant tune of Duma Dum Mast Kalandhar. The stage is set for the imminent capture of crime lord "Goldman" (yes, you read that correctly) or Iqbal Seth (Rishi Kapoor), an egotistical villain who wears red-tinted sunglasses and oversees terror activity in India.

The four RAW field agents who are running the undercover operation are spot on until something goes wrong, and we are hurled back into a series of flashbacks.

The plot familiarizes the viewer with the credentials and vagaries of the agents, shuttling back and forth between their personal moments/motives and their public personas. This sets the tone for the remainder of the film, which is not merely about a battle to extradite "India's Most Wanted" man, but also equally about a tussle between the private and the political.

Wali Khan's (Irrfan Khan) small world comprises his loving wife and son who are unaware of his undercover identity. The tender moments that unfold among these three characters are superbly etched, and form a radical contrast to the merciless landscape of butchery.

Rudra Pratap Singh (Arjun Rampal), an ex-army officer, is a solitary mercenary, hard and uncompromising. The script entangles him with an unnamed Pakistani prostitute (Shruti Haasan), and an unconventional love surfaces. The love scenes between the two are aesthetically potent, and the sensuousness brings to the fore the loneliness of the characters.

Zoya Rehman (Huma Qureshi) is an explosives expert who fulfills her duty towards the nation, at the cost of her marriage. Even the villain, Goldman himself, is a prisoner of the tug-of-war between emotion and cold calculation; his desire to attend his son's wedding is relentless though it poses a threat to his very life.

The first half of the film sends a chill down your spine because it traces the complexity of individuals who have sworn to contradictory ideals, and who, however flawed, evoke a deep sense of empathy. The emotional tenor of the film, owing to superior dialogues, is like a punch in the guts.

It is here that the action sequences of the film deserve a mention. The chase and fights as well as the blood and gore are raw and believable. They blend in seamlessly with the movement of the plot and the emotional framework of the personal stories. Action director Thomas Struthers (of The Dark Knight, Inception, and Blood Diamond fame) remains rooted in an Indian aesthetic even as he conceives slick and modern action.

In all honesty, the reviewer entered the theatre with trepidation, reluctant to sit through two and a half hours of ear-blasting jingoism, as can be expected from a film dealing with Pakistan and the ISI.

The first bit of D-Day is a nuanced examination of the dubious workings of intelligence agencies (whether India or its neighbouring foe), and of the human heart. It will resonate with any kind of audience because it points to the uncertainty of life and its fragility. Who knows where the next bomb blast will go off? It feeds on this particular fear of ours.

Unfortunately, the penultimate section of the film suddenly metamorphoses into an overwhelming lesson on patriotism. The incessant need for sacrifice on the part of the agents puts a strain on the plot, and weakens it.

Also, the development of the characters through this bit of the film is somewhat abrupt. The film establishes the stories of the four RAW agents, and that is done well. We do not have a problem with the fact that the underdogs transform into heroes. How else is the viewer to experience cathartic justice? But it is as if they jump into their guardians-of-the-nation suits without enough motivation. The dénouement is an echo of the convulsive national debate on fair trail for terrorists and capital punishment. It spirals out of control as the exchange between the heroes and the villain turns into a harangue.

Despite this, D-day is worth a watch. The compelling performances by its lead actors are a treat. Irrfan Khan is a master of his craft, as is Rishi Kapoor. Huma Qureshi fills her role with character. Aakash Dahiya who plays Aslam, the fourth agent, is an actor to watch out for. But it is the brooding Arjun Rampal who is the real surprise.

The soulful music by Shankar-Ehsaan-Loy is especially poignant, and will remain with you long after you leave the theatre. The songs are well-integrated into the story, and add valuable meaning to the various scenes.

Nikhil Advani tells a well-crafted story, and even if you do not agree with its ideological import, you will agree that it tells a very human story.
Share. Save. Connect.
Tweet
D-DAY SNAPSHOT 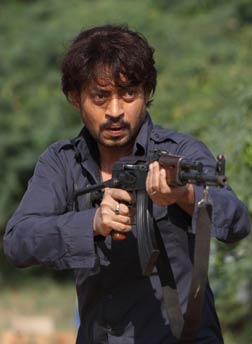 ADVERTISEMENT
This page was tagged for
D-Day hindi movie
D-Day reviews
release date
Irrfan Khan, Arjun Rampal
theatres list
Follow @fullhyderabad
Follow fullhyd.com on
About Hyderabad
The Hyderabad Community
Improve fullhyd.com
More
Our Other Local Guides
Our other sites
© Copyright 1999-2009 LRR Technologies (Hyderabad), Pvt Ltd. All rights reserved. fullhyd, fullhyderabad, Welcome To The Neighbourhood are trademarks of LRR Technologies (Hyderabad) Pvt Ltd. The textual, graphic, audio and audiovisual material in this site is protected by copyright law. You may not copy, distribute, or use this material except as necessary for your personal, non-commercial use. Any trademarks are the properties of their respective owners. More on Hyderabad, India. Jobs in Hyderabad.