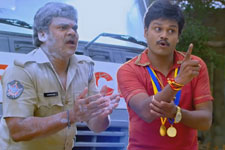 Ravi Kandala / fullhyd.com
EDITOR RATING
3.0
Performances
Script
Music/Soundtrack
Visuals
2.0
3.0
2.0
4.0
Suggestions
Can watch again
No
Good for kids
No
Good for dates
No
Wait for OTT
No
Karma does not wait long. And this reviewer is proof. On a day when he watched Dangal, he also needed to watch Saptagiri Express. It was a complete reversal. I was in Screen 4 of Inox in the second row from the screen watching Dangal in the morning while I was in Screen 2 of the same multiplex in the fourth row from top watching Saptagiri Express in the evening. The movies were complete opposites, too.

Where Dangal championed women, Saptagiri Express alternately vilifies women and shows them being exploited. Where Dangal had a superstar putting his stardom aside and letting others take centrestage, SE has a comedian who's so far been nothing more than a sidekick, trying to become a superstar. Where Dangal told its narrative with loads of humour as part of the story, SE has crass humour which repels more than it entertains.

Saptagiri Express was made solely with the purpose of cashing in on Saptagiri's rise as a comedian in recent times (we do have our doubts about his rise, though - he's been entertaining in a couple of films but has been more than irritating in scores of others). The film has him playing Saptagiri, a young man who wants to become a filmstar. His father, a head constable, wants to see him become an IPS officer. When Saptagiri's father is killed in an encounter, Saptagiri gets the job and becomes a police constable. How he uncovers a plot involving the DSP Papayamma (Posani Krishna Murali), a gangster, an SI and other criminals, and avenges his father's death, forms the rest of the story.

SE is cringe-worthy from the word go. The film starts with Saptagiri acting in a short film as Parasurama, and immediately jumps on to a song where the new hero preaches and advises us to be positive in life. His dialogue delivery is immediately shown up when he says "Rama nama daari vi nuvvenaa" instead of "Rama nama dhaari vi nuvvenaa". He then proceeds to murder half a dozen more such words mispronouncing them as "badyata", "boomi", "danussu" etc.

Then, the director is clearly one with his own notions of social justice, and incorporates weird concepts. Sample these two for example. The DSP's son rapes a girl. So Saptagiri gets him "raped" by four male prisoners, and this results in him turning gay. The punishment for rape is apparently rape. In a second instance, Saptagiri takes the help of his girlfriend (Roshni Prakash), who's an anesthetist, to inject chain snatchers with anesthesia and cut off their arms. This results in an entire batch of one-handed chain snatchers who are then told to confess their crimes on television so they can get their arms back. This sequence also involves a doctor stitching their arms back.

If these do not deter you, there are also sequences of Saptagiri beating up women in an avatar called Chaddi Man. There are scores more issues with the film, but we think it is safe to stop here in the hope that you are not going anywhere near a theatre playing this film. All the technical departments do their job like it is a job - nothing stands out.

Finally, NTR must be really turning in his grave. His famous dialogue from Dana Veera Sura Karna - the one that goes "Yemantivi, yemantivi, idi kshaatra pariksha ye gaani kshatriya pariksha kaadu, kaaradu" - is being used by every single comedian who intends to show off his acting chops or is being spoofed, so often that we grimace the moment someone starts uttering it. And hearing Saptagiri utter the same line is definitely enough to make the legend turn in his grave.
Share. Save. Connect.
Tweet
SAPTAGIRI EXPRESS SNAPSHOT 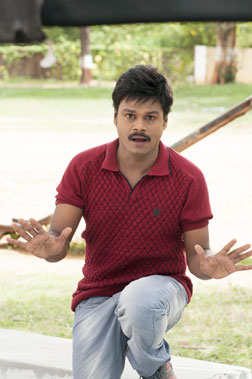 ADVERTISEMENT
This page was tagged for
Satagiri express concept
Saptagiri Express telugu movie
Saptagiri Express reviews
release date
Saptagiri, Roshni Prakash
Follow @fullhyderabad
Follow fullhyd.com on
About Hyderabad
The Hyderabad Community
Improve fullhyd.com
More
Our Other Local Guides
Our other sites
© Copyright 1999-2009 LRR Technologies (Hyderabad), Pvt Ltd. All rights reserved. fullhyd, fullhyderabad, Welcome To The Neighbourhood are trademarks of LRR Technologies (Hyderabad) Pvt Ltd. The textual, graphic, audio and audiovisual material in this site is protected by copyright law. You may not copy, distribute, or use this material except as necessary for your personal, non-commercial use. Any trademarks are the properties of their respective owners. More on Hyderabad, India. Jobs in Hyderabad.