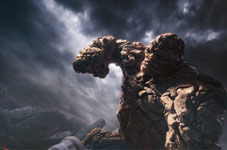 Zehra Abbas / fullhyd.com
EDITOR RATING
3.0
Performances
Script
Music/Soundtrack
Visuals
7.0
3.0
6.0
7.0
Suggestions
Can watch again
No
Good for kids
No
Good for dates
No
Wait to rent it
Yes
It's apparent right from the beginning that the makers of Fantastic Four 4 decided to go in a different direction from the previous films. What direction is that, you might ask. Five minutes into the film, you'll find yourself at a dark salvage yard called "Grimm". That's your first clue, and it does not bode well for the general tone of the film.

Paradoxically enough, the makers take the inexplicable decision to rehash the origins story of Marvel's favourite superhero quartet. Comic book fans know it inside out, and movie buffs have seen it done in the older films, but no, they just had to do it again.

So, what you have is old wine in a new bottle that you'll want to smash over the makers' heads once you finish with the film.

Reed Richards (Miles Teller) and Ben Grimm (Jamie Bell) are childhood pals who have been working on a teleporter since they were in the fifth grade. Years later, Professor Franklin Storm (Reg E. Cathy) stumbles upon the boys at a science fair, and Reed goes to work for him at the Baxter Foundation. He teams up with Storm's kids, Sue (Kate Mara) and Johnny (Michael B. Jordan), as well as a renegade former student, Victor von Doom (Toby Kebbell).

Professor Storm's young geniuses succeed in building a machine that can teleport matter (including people, of course) to an alternate dimension called Planet Zero. Incidentally, that name is another clue, and it doesn't bode well, either, for the imagination propelling the film.

Long story short, Reed, Ben, Johnny and Victor are incensed by the government's decision to take over the project and send NASA on the first mission to Planet Zero instead of them, and they decide to beat the government to it. One drunken rant later, they secretly teleport themselves to a hitherto unexplored and unknown dimension (did we mention that they are geniuses?), and as is the tradition in superhero origin stories, things go horribly wrong. The entire team, including Sue, is infected with super powers.

Yes, we used the word infected. You see, what follows is not an exciting and fun segment about the discovery and exploration of these new superpowers. You won't see Mr. Fantastic zooming to the top of a building on his bendy, elongated legs, or The Human Torch showing off his comet-like abilities, or even The Thing gleefully clobbering someone into the stratosphere.

What you get is the superhero equivalent of chemotherapy.

Once our four superheroes acquire their powers, the scenario is anything but fantastic; it's a painful period of acclimatizing to their new powers, depression, unhappiness, and exploitation by the government. At this point, when you look distractedly at your watch, you'll be horrified to realize that the film has already crossed more than an hour. In a film that is a total of one hour and 46 minutes, that is a real drawback.

The makers probably realized that belatedly, too. However, they fail to patch up the holes in the script and the pace of the film, and what you have is a seriously compromised narrative drive. The movie is glacially slow till the last twenty minutes or so. Suddenly, Dr. Doom makes his appearance (about time), and the green slime from Planet Zero hits the ceiling.

You try to recover from the abrupt transition from staid storytelling to climactic confrontation, because you're finally going to be treated to some good old action. But it's no use. The action (all 15 minutes of it) comprises of Doom staring at people and making their heads explode, and then our heroes battling him at Planet Zero in a showdown that is so awful (writing, acting, special effects, you name it) that it makes you want to cry.

Doom's big plan is to vacuum the earth into a giant black hole, and yes, our yawns were as big as that hole on screen. The lack of originality is staggering - the makers succumb to the temptation of big spectacle versus inventiveness, and it backfires quite dramatically. You've seen it all before, and you've seen it done better.

So the villain Doom is dispatched with a considerable lack of finesse, and then the four heroes sit down for a tough talk with the government in order to assert their independence. The actors come across as gauche and unsure at this point, and weirdly enough, a huge plate of croissants is placed on the table that distracts you from the "intense" negotiation that's taking place.

What a pity, considering that there is no disputing the talent of the cast. But these actors would need actual superpowers to surmount the bad script and direction. The sad irony is that though they all travel to another dimension, each character in this franchise remains a one-dimensional cardboard figure of the original.

Miles Teller is the only saving grace because he manages to retain his innate likeability through this train wreck. Mara looks dazed and might as well have been invisible, and Jordan is almost comical when he tries his hand at The Torch's characteristic rebelliousness and humour. Kebbell does some impressive glowering before he's turned into the expressionless Dr. Doom, and ditto for Jamie Bell, who gets little screen time before his character turns into a pile of rocks, and acts like a pile of rocks. The Thing's total lack of personality is particularly noticeable.

Why do we watch superhero films? They allow us to take an almost childish pleasure in fantastical powers, superhuman feats, impossible heroism, cheesy humour, and kickass action. Fantastic Four (2015) sucks the fun out of all these elements in a misguided attempt at a dark and dramatic interpretation of the franchise. If the 2005 and 2007 films were mediocre and goofy, this one just might claim the dubious distinction of killing the possibility of any future cinematic outings for Marvel's popular quartet. 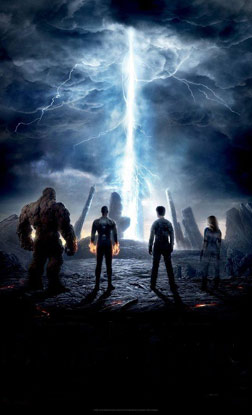 ADVERTISEMENT
This page was tagged for
Fantastic Four 4 english movie
Fantastic Four 4 reviews
release date
Miles Teller, Kate Mara
theatres list
Follow @fullhyderabad
Follow fullhyd.com on
About Hyderabad
The Hyderabad Community
Improve fullhyd.com
More
Our Other Local Guides
Our other sites
© Copyright 1999-2009 LRR Technologies (Hyderabad), Pvt Ltd. All rights reserved. fullhyd, fullhyderabad, Welcome To The Neighbourhood are trademarks of LRR Technologies (Hyderabad) Pvt Ltd. The textual, graphic, audio and audiovisual material in this site is protected by copyright law. You may not copy, distribute, or use this material except as necessary for your personal, non-commercial use. Any trademarks are the properties of their respective owners. More on Hyderabad, India. Jobs in Hyderabad.