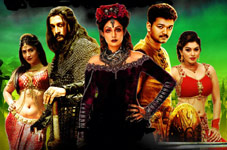 Josh / fullhyd.com
EDITOR RATING
4.0
Performances
Script
Music/Soundtrack
Visuals
6.0
4.0
4.0
5.0
Suggestions
Can watch again
No
Good for kids
Yes
Good for dates
No
Wait to rent it
Yes
Puli harks back to the era of Vithalacharya and NTR. Or should we say B R Panthulu and MGR? It's a dubbed Tamil film, after all. You know, the movies where a folk hero lives in a strange land with the plebeians and eventually battles the evil royalty to win his girl and some peace for his community. The older MGR movies were often filled with political innuendos, and the films are said to have greatly boosted his popularity subsequently contributing to his political success.

Puli is a standard issue reboot of such films, and is fairly assertive about making its hero say things like "I'm always willing to die for my people". It's like Vijay doesn't want any confusion about his political intentions. Which is all very fine for Tamilians and anyone who is interested in their fortunes, but how does it affect the average Telugu movie-goer? How is (s)he supposed to make sense of the decidedly Tamil epithet "Ilaya Thalapathi" that is stuck to Vijay's name at the beginning credits?

Anyway, so the Bhetalas are an evil and magical ruling race who oppress about 56 villages and are brutal in their extortion of duties. Bhairavakona is one of those villages, and their headman (Prabhu) loses his arm in an attempt to reason with the head of the Bhetala army (Sudeep, with great screen presence). Years later, his adopted son (who came drifting in a bird's nest when he was a baby) Manohara (Vijay) learns that his sweetheart Mandaaramalli (Shruti Haasan) is abducted by the Bhetalas, and ventures out to the Bhetalas fort to retrieve his lady love. To accomplish this task, he has to use his charm and wile to win over the princess (Hansika Motwani) and the queen (Sridevi) who practices witchcraft.

In the course of this plot, we come across many strange things - a talking bird, a one-eyed monster, a strength-giving potion, Lilliputs, an arm-extending queen, more terrible CGI, garish costumes, absurd dialogue, utter disregard to the law of conservation of momentum... oh, the list of curiosities this fantasy throws at us is endless.

Vijay, until recently, was basking in the success of the smart thriller Thuppaki and the intense mass flick Kaththi (being remade into Telugu with Jr. NTR), and Puli is the rainy day that will dim all that sunshine. It is ironical how this fantasy will show him the grim reality. That not every director who wants to work with him is Murugadoss (the director of both Thuppaki and Kaththi) and not every fantasy period is Baahubali.

The comparison with Baahubali is very tempting and we'll bite - Puli is like Baahubali's third cousin who's suffering from ADHD. Where Baahubali strives and succeeds to be epic, Puli aims at a moderate bar of entertainment and barely scrapes it. Where Baahubali achieves consistency in texture, narration and imagination, the only consistency in Puli is how inconsistent it is. Chimbudeven (the director) makes the scenes appear self-sufficient but they don't really work together. But this shouldn't really be a problem if you are only seeking mild entertainment or if you are a kid. In fact, Puli would work best for kids who enjoy simple CGI or the comedic antics of Vijay.

The biggest joke in the movie is that Hansika plays Sridevi's daughter. Sridevi is devilishly good as the witch queen and seems to be having a lot of fun with the character. Her variety amazes you as much today as it did in an earlier era. And then we have Hansika who uses the same stock expressions in movie after movie (the only variations we seem to notice of late are the ones in her bodyweight). How could she be Sridevi's daughter, you'll smirk. After this snide on the on-screen mother and daughter, we sheepishly acknowledged that Shruti Haasan is the actual daughter of Kamal Haasan and Sarika. For all her illustrious genes, she seems quite content with looking pretty and dancing well.

The visuals and colours are as loud as the costumes, and the music (Devi Sri Prasad, who probably needs to take a sabbatical) is louder. Some effort has gone into making the dubbing work, and that helps the comedy from being lost in translation - but it isn't much, we must tell you.

Puli makes for some lightweight entertainment if you enjoy these fantasy films with a few thrills. Your child may like it more, though.
Share. Save. Connect.
Tweet
PULI (TELUGU) SNAPSHOT 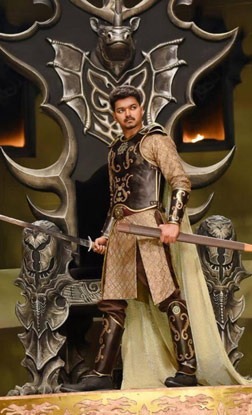 ADVERTISEMENT
This page was tagged for
Puli (Telugu) telugu movie
Puli (Telugu) reviews
release date
Vijay, Sridevi
theatres list
Follow @fullhyderabad
Follow fullhyd.com on
About Hyderabad
The Hyderabad Community
Improve fullhyd.com
More
Our Other Local Guides
Our other sites
© Copyright 1999-2009 LRR Technologies (Hyderabad), Pvt Ltd. All rights reserved. fullhyd, fullhyderabad, Welcome To The Neighbourhood are trademarks of LRR Technologies (Hyderabad) Pvt Ltd. The textual, graphic, audio and audiovisual material in this site is protected by copyright law. You may not copy, distribute, or use this material except as necessary for your personal, non-commercial use. Any trademarks are the properties of their respective owners. More on Hyderabad, India. Jobs in Hyderabad.