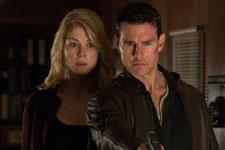 Nupur Barua / fullhyd.com
EDITOR RATING
6.0
Performances
Script
Music/Soundtrack
Visuals
7.0
5.0
5.0
6.0
Suggestions
Can watch again
Yes
Good for kids
No
Good for dates
Yes
Wait for OTT
No
It is difficult to predict or presume what Jack Reacher is going to be all about, unless, of course, you know of the fictional character who stars in 17 of Lee Child's books. Add to that the fact that Tom Cruise plays Jack Reacher, and you have mixed questions that arise automatically - is he reprising/resurrecting Ethan Hunt, is he going to be an action hero, is this a psychological thriller, or will it remind you of A Few Good Men? None of the above, actually, yet some of the above in bits and parts.

So, who is Jack Reacher? When a sniper shoots five random people in a Pittsburgh park for no apparent reason, all evidence points to one ex-army sharpshooter named James Barr (Joseph Sikora). He makes his own bullets, and his fingerprints are all over the place. On being investigated, he just asks for Jack Reacher (Tom Cruise), after which he goes into a coma.

The District Attorney, Alex Rodin (Richard Jenkins), and Detective Emerson (David Oyelowo) are trying to figure out who Jack Reacher is. But when Jack Reacher comes in, something does not add up.

Lee Child himself endorsed the selection of Tom Cruise as Jack Reacher, because he believed that the actor has the talent to portray the character effectively. Based on the book One Shot, the film stays as true to the original novel as possible.

Christopher McQuarrie, who also wrote the screenplay, did away with some of the minor characters, but their absence is not felt in the plot of the film. The screenplay is tight, almost. McQuarrie does incorporate clichés in dialogues and actions here and there, but the overall effect is more than satisfactory.

There are slight tinges of indulgence, on the part of the director, that makes the movie a long one, and it is the end which is disappointing, almost as if everybody is in a hurry to get things over and done with.

Jack Reacher is, in the books, a loner and an agoraphobic. He does not exhibit sympathy, or even apathy. Tom Cruise falters a little here when it comes to becoming the character. He brings in his star persona, and is a little larger than life, which goes against the grain of what Jack Reacher is all about. One cannot find fault with him here, because an American film hero is all about patriotism and intrigue. Tom Cruise does take his shirt off once, to distract the heroine.

Rosamund Pike does a good job as the defence lawyer, who is in some state of rebellion against her District Attorney father, and who is also an upright citizen. She does not have much sex appeal, which is a first for an actor pitted against Tom Cruise.

Richard Jenkins, David Oyelowo and Joseph Sikora play their parts with ease. Robert Duvall is a surprise. The production design is decent, as are the costumes. Look out for the chase sequence - it is pretty exciting. Some of the camera work is jaw-dropping, but those moments are rare.

Watch Jack Reacher if you like spy/thriller/action flicks, but do not expect to see anything you have not seen countless times before. Despite the length, it keeps you hooked.
Share. Save. Connect.
Tweet
JACK REACHER SNAPSHOT 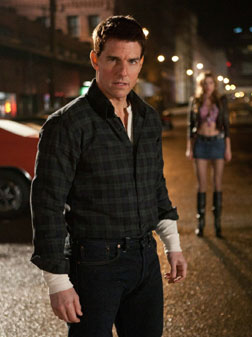 ADVERTISEMENT
This page was tagged for
Jack Reacher english movie
Jack Reacher reviews
release date
Tom Cruise, Rosamund Pike
theatres list
Follow @fullhyderabad
Follow fullhyd.com on
About Hyderabad
The Hyderabad Community
Improve fullhyd.com
More
Our Other Local Guides
Our other sites
© Copyright 1999-2009 LRR Technologies (Hyderabad), Pvt Ltd. All rights reserved. fullhyd, fullhyderabad, Welcome To The Neighbourhood are trademarks of LRR Technologies (Hyderabad) Pvt Ltd. The textual, graphic, audio and audiovisual material in this site is protected by copyright law. You may not copy, distribute, or use this material except as necessary for your personal, non-commercial use. Any trademarks are the properties of their respective owners. More on Hyderabad, India. Jobs in Hyderabad.