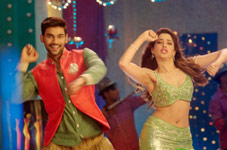 Ravi Kandala / fullhyd.com
EDITOR RATING
3.0
Performances
Script
Music/Soundtrack
Visuals
5.0
3.0
3.0
5.0
Suggestions
Can watch again
No
Good for kids
No
Good for dates
No
Wait to rent it
No
This is just Bellamkonda Srinivas' second movie, but we know one thing for sure about him. Whatever character he plays, wherever his character lives, however old he grows, what will not change about him is his look. He will wear the same full-sleeved shirt with a T-shirt inside, he will have the same light beard and heavily waxed hair (even a strand will not move out of place be it a song or a fight or a chase), he will wear the same contact lens, and he will maintain his one-note expression.

Speedunnodu is a remake of a Tamil hit, but we're sure that the Tamil original had a lot more rustic flavor and concentrated on the gang of friends instead of training all its spotlights on the "HERO". But wait, let us tell you the salient plot points first - we'll tear it apart later.

Sobhan (Bellamkonda Srinivas) lives in a village in Rayalaseema called Raptadu. He is an engineering graduate who does no work even four years after graduating. He goes around the village wearing branded clothes that totally look incongrous with the setting. He believes strongly in friendship and will do anything to help his friends. In one particular instance, one of his friends mentions that he is in love with a girl, Vasanthi (Sonarika). To help him, Sobhan gets onto the only college bus that goes through his village.

In the mother of all twists (pun intended), Vasanthi falls for Sobhan instead. Now, Vasanthi is already engaged to Jagan (Kabir Dua), who is also Sobhan's friend. Vasanthi's father has some axe to grind with Sobhan, and is obviously averse to his daughter actually marrying Sobhan. How Sobhan manages to convince Vasanthi's father and then beats up all his friends until they accept his wedding forms the rest - sorry, last twenty minutes of Speedunnodu. Until then, the film trudges along like the bus around which the story revolves.

At least the bus has some direction and purpose, but Speedunnodu shows none of the same. Three-fourths of the film's run time is devoted to the shenanigans and lame jokes of Sobhan and his gang. The jokes fall flat - we've seen much better village comedies in the recent past, and a bunch of louts going around the village drinking and smoking and making fun of old people does not cut it any longer. The fact that the hero and his lackeys look like total misfits in the village does not help, either.

The love story is the least convincing of all. There's a silly flashback that tells us that Sobhan had actually proposed to Vasanthi while she was in Class X and he was in college, and that Vasanthi had rejected his advances then. Fast forward to the current day - Vasanthi tells Sobhan that when a Class X girl is asked about love she will obviously not know what to do, but now that she's matured, she's realized she's fallen in love with him. Sobhan, who until that scene does not show the slightest interest in Vasanthi, suddenly comes back the next day and professes undying love for her.

There is loads of money spent on the film, but you can only do so much to a face. Unfortunately, Bellamkonda Srinivas does not have either the kind of presence or acting ability to engage the crowds. His one-note expression does not convey too many feelings. He is scared to emerge from behind his makeup, and it is hard to see how he can grow as an actor behind that amount of pancake. Sonarika Bhadoria is miscast, and her makeup is bad, too. The supporting cast, apart from the hero's sidekicks, get limited scope.

The music is scored solely with the purpose of helping the choreographers compose awesome steps for Srinivas so he can show off his dancing prowess (he's good at that, by the way - like we said earlier, too). The film has been made on a lavish budget - you do constantly get the feeling that they could've wrapped it up in much less.

Speedunnodu is too slow for comfort, and all the adulatory dialogues from the comedians about the hero do nothing to increase its watchability. This guy is moving out of the theatres with a lot of speed. 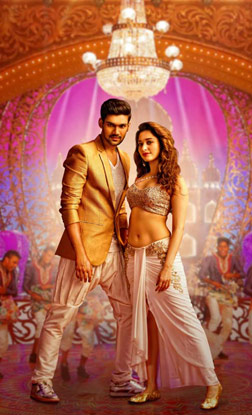 ADVERTISEMENT
This page was tagged for
in film speedunnodu who is the hero
speedunnodu telugu full movies dowlod
Speedunnodu telugu movie
Speedunnodu reviews
release date
Follow @fullhyderabad
Follow fullhyd.com on
About Hyderabad
The Hyderabad Community
Improve fullhyd.com
More
Our Other Local Guides
Our other sites
© Copyright 1999-2009 LRR Technologies (Hyderabad), Pvt Ltd. All rights reserved. fullhyd, fullhyderabad, Welcome To The Neighbourhood are trademarks of LRR Technologies (Hyderabad) Pvt Ltd. The textual, graphic, audio and audiovisual material in this site is protected by copyright law. You may not copy, distribute, or use this material except as necessary for your personal, non-commercial use. Any trademarks are the properties of their respective owners. More on Hyderabad, India. Jobs in Hyderabad.