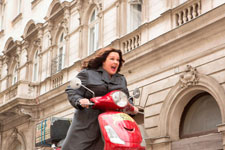 Zehra Abbas / fullhyd.com
EDITOR RATING
7.0
Performances
Script
Music/Soundtrack
Visuals
7.5
7.0
6.5
7.0
Suggestions
Can watch again
No
Good for kids
No
Good for dates
Yes
Wait for OTT
Yes
Her name is Cooper, Super Cooper. But that wasn't always the case. When you first meet Susan Cooper (Melissa McCarthy), she's a field-trained CIA agent, who's been banished to the rodent-infested basement in Langley. She functions as the little voice in the ear of Agent Bradley Fine (Jude Law). No, she's not his conscience. She's just the CIA analyst assigned to guide him through his missions with the help of a nifty little earpiece. Susan is 40, single, overweight, and hopelessly in love with Bradley. She stays in her dead-end job simply because he's so "fine".

Once Bradley falls off the map, and the identity of every CIA agent in the field is compromised, it falls to Susan to enter the fray in a strictly "track and report" assignment. The stakes are high - a nuke in New York - and Susan tracks and reports successfully. However, she also kicks ass, and in the process discovers her alter ego - a foul-mouthed, caustic, and very able spy.

The film isn't a full-on spoof of spy films, but it does pay homage to practically every element of the genre. When you first meet Bradley Fine, the comparisons with Bond are inevitable. He's a dapper, deadly and drop-dead gorgeous secret agent. However, he's also a wee bit smarmy, and doesn't think twice about exploiting Susan's feelings for him. Therefore, the climax is particularly satisfying - Fine stands by open-mouthed while Cooper decimates the baddies and effectively turns him into a Bond girl.

On the other end of the spectrum is Rick Ford (Jason Statham), arguably the funniest character in the film. Statham spoofs his own oeuvre brilliantly, and plays a meathead misogynist with admirable abandon. Ford is full of details of his exploits in the field. These range from jumping from a high rise without a parachute and ingesting 179 types of poison - at once - to having his left arm ripped off and then promptly reattaching it with his right arm. He even boasts about taking up piano at a late age. At the end of the film, he boards his boat because he needs time to himself, and plans to sail to Italy. And off he sets through the deep blue waters of ...a lake.

What's a spy film without a great villain? So adding to the fun is Rose Byrne, who does a hysterical turn as Rayna Boyanov, a ruthless arms dealer. Rayna looks like she stepped out of Vogue, and should be selling Prada and Gucci. However, she's actually itching to sell a nuke, and doesn't take obstacles to her plan very gracefully. When in control, she's the queen of posh put-downs - the catty chemistry between Susan and Rayna is hilarious. But when she's upset, Rayna drops a lot of F-Bombs, and yet stays paradoxically likeable.

Speaking of likeability, you can't ignore Susan's nervous and goofy Langley associate Nancy (Miranda Hart), whose loyalty is often compromised by her tendency to be easily excited. Imagine the mayhem that ensues when she runs into 50 Cent, playing himself in a special appearance. Another Brit actor who gets a lot of laughs is Peter Serafinowicz as Aldo, the lecherous Italian who spends all his energy (even when trying to escape certain death) trying to grope Susan.

Writer and director Paul Feig doesn't just doff his hat to the tradition of quirky sidekicks via Nancy and Aldo, he brings in the gadgets, too. Like every secret agent, Susan is also outfitted with a deadly arsenal - fungal cream, hemorrhoid wipes, a rape whistle, and of course, stool softeners. Naturally, all of these innocuous items have a hidden, deadly purpose. Seeing Susan use them in the thick of action should normally have you in splits.

One of the more surprising elements of Spy is the authentic action. Sure, they've used body doubles - who doesn't? But the makers haven't flinched from unleashing the kind of action choreography that you'd find in the best spy films. So you will be treated to the regular chase sequences, hand-to-hand combat and sniper fire, but all with the McCarthy twist. Case in point - check out her brutal fight with Nargis Fakhri (making her Hollywood debut) in a kitchen. A frying pan is heavily involved, and that's all we're saying.

Ultimately, this is Melissa McCarthy's film all the way. She has a remarkable flair for physical comedy, and the kind of big personality that manages to pull off pretty crude humour. However, what's interesting in this film is that Feig has invested Susan with a believable character arc. So it's endearing to see her swing between anxiety, fear, determination and confidence, while mouthing off all those dialogues that make you cringe and laugh.

McCarthy's creative collaboration with Paul Feig has done wonders for her career, and this film gives us hope for their next project - an all-female remake of Ghostbusters. The only problem with Spy is that it's not consistently funny, and despite the many British actors (many of whom could have been put to better, and more prolonged, use in the film), the humour remains very American. That's not everyone's cup of tea, but for those who are game for loud and in-your-face comedy, here's one just for you.
Share. Save. Connect.
Tweet
SPY SNAPSHOT 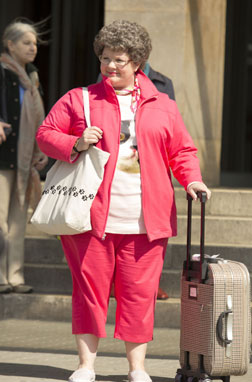 ADVERTISEMENT
This page was tagged for
Spy english movie
Spy reviews
release date
Jude Law, Raad Rawi
theatres list
Follow @fullhyderabad
Follow fullhyd.com on
About Hyderabad
The Hyderabad Community
Improve fullhyd.com
More
Our Other Local Guides
Our other sites
© Copyright 1999-2009 LRR Technologies (Hyderabad), Pvt Ltd. All rights reserved. fullhyd, fullhyderabad, Welcome To The Neighbourhood are trademarks of LRR Technologies (Hyderabad) Pvt Ltd. The textual, graphic, audio and audiovisual material in this site is protected by copyright law. You may not copy, distribute, or use this material except as necessary for your personal, non-commercial use. Any trademarks are the properties of their respective owners. More on Hyderabad, India. Jobs in Hyderabad.