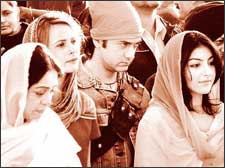 Priyanka Pulla / fullhyd.com
EDITOR RATING
7.5
Performances
Script
Music/Soundtrack
Visuals
NA
NA
NA
NA
Suggestions
Can watch again
NA
Good for kids
NA
Good for dates
NA
Wait to rent it
NA
Rang De Basanti is a bohemian movie, one that deals with an unexceptional story in an avant-garde way. As you watch, the monochrome of hackneyed patriotic fervor is split through an unforgiving prism into dazzling shades. It’s like attacking your enemy from behind. All the cliché and the mythology stays, yet the sensibilities are dealt with so well, you are in tearful admiration. The battle is won.

Sue (Alice Patten) is a British moviemaker, who comes to India to make a movie about the Chandrasekhar Azad, Bhagat Singh, Bismil, Ashfaq coterie. Her grandfather is the English jailer who walked them to their hanging, and it is his diary she wants to reproduce on the screen. She zeroes in on the gang of DJ or Diljeet (Aamir Khan), Aslam (Kunal Kapoor), Karan (Siddharth) and Sukhi (Sharman Joshi) to play the parts.

The youngsters, though, are far removed from the hot-blooded patriots she expected. High on beer most of the time, they are dancing and whiling their lives away, to the tune of A R Rehman’s electric number Paathshaala. They practice the dialogues in the midst of slaphappy mockery and mischief, while Sue is watching their antics half-amused and half-distraught.

Sonia (Soha Ali Khan), looking fresh and tender, plays the link between Sue and the group. Her boyfriend is Ajay (Madhavan), a MIG21 fighter pilot with the Indian Air Force.

The story-telling technique is impressionist, with images and music creating the mood, rather than the dialogues. Racy, quick images of students tearing at top speed on their bikes are followed by a red car, to create the boisterous mood. And a lighthearted fluttering song plays out the love of the newly engaged Ajay and Sonia. The flashing images, sudden-stills technique is fun - it amuses the audience for one thing. And the heavy Punjabi dialogues that punch like a danda swiping a gilli right across a narrow village gully, are part of the intoxication of Rang De Basanti.

What happens next is the sudden death of Ajay in a plane crash. He is an ace pilot, and the cause of the accident is substandard Russian parts that have found their way to India through corrupt deals with the Defence Ministry. Instantly the tides turn, as the government attacks the skills of the pilot to defend its own shady deals. DJ’s group is shattered.

This is where Rang De Basanti takes on a revolutionary look, an unconventional turn. DJ’s gang suddenly takes matters into their own hands, and a juxtaposition of the group’s behavior, analogy for painfully precise analogy with the freedom fight events, is shown. This is the movie’s highlight.

While the build-up after the interval is suddenly as slow and leisurely as a glob of oil-paint dispelling in water, it picks up when the plot breaks through again. This time it makes you brain cells jog, watching the surreal déjà vu of events. And yes, young blood fighting for an altruistic cause, with their lives does break your heart effectively.

Finally, needless to say, Rang De Basanti is one movie where the script completely subsumes the characters. Every element plays equally, like it would in an epic like the Lord Of The Rings. The cast, the music, the visuals, the dialogue, the whole movie in fact, is a vast mosaic of all these, a whole that is not propped up by one or two of its parts alone.

Aamir shines, but so do Siddharth and Kunal and Soha and the rest. Like we said, the script plays around with all the characters rather than revolve around a single one. And yes, watch out for the music by Rehman. It is the spirit of the movie - the engine that synchronously propels it, keeps it afloat, or sinks with it gracefully. When you leave the theater you will at least be intellectually satisfied, even if not emotionally stirred. A movie that can do both, and perhaps stand scrutiny both ways, is definitely going to be one to reckon with.
Share. Save. Connect.
Tweet
RANG DE BASANTI SNAPSHOT

See Rang De Basanti full details
RANG DE BASANTI USER REVIEWS
1 - 15 OF 24 COMMENTS  |  NEXT  |  LAST
POSITIVE  |  NEGATIVE |  NEWEST  |  OLDEST  |  MOST HELPFUL  |  LEAST HELPFUL
USER RATING
8.2
294 USERS
Performances
Script
Music/Soundtrack
Visuals
NA
NA
NA
NA
Can watch again - NA
Good for kids - NA
Good for dates - NA
Wait to rent it - NA
Anurag Anand on 17th Jul 2006, 1:14pm | Permalink
kakke!what a movie yaar .camaal kardiye sale pen de takke. tu kuch bhi kar maine dekhi picture
RATING
10
Katie Diffy on 12th Jun 2006, 2:31pm | Permalink
the best movie of the millenium.siddharth narayan aka karan simply rocks!!!!!!!!!!!
RATING
10
Saradhi on 2nd May 2006, 5:23pm | Permalink
I think director misinterpreted the concept of freedom fighting. Bhagat Sing, sukhdev, Rajguru and Chandrasekhar azad fought for freedom. The main motto is to terrorize the british people and to motivate the people towards the freedom, which is a very brave act. Their motive was not to kill your own people or to reduce the corruption. It is for just getting rid of the british people. But the four lead roles took it in the opposite direction. If the freedom fighters are called Krantikaris those days, if we do such kind of activities these days towards our own government, then we will be called as terrorists, naxalites or whatever may be. This government was elected by us, we are responsible for increase of corruption, then why should we kill such kind of people. Simply do not elect them. My view is not to support the corrupted people, but that is not the way of fighting. if you kill someone today, some other will come up tomorrow. This process continues till you do not erase it from the roots. So, I feel the directors view is not good.
RATING
6
Rahul on 25th Mar 2006, 9:20pm | Permalink
Desi audience gives ONE patriotic movie a chance every 5 yrs. The last one was Gadar and I guess RDB is the lucky winner now. Of course, I am not taking away anything from the movie - which is very good in its own respect. I am surprised we are not calling this movie a lesson in history.. cause we SHUN to see any movies that tell us anything of our history. Anywayz, this movie is very good. Go check it out on big screen.
RATING
8
Gabbar Ki Basanthi on 13th Mar 2006, 4:24pm | Permalink
This is a good movie.
RATING
2
K V Nandakishore on 12th Mar 2006, 1:48pm | Permalink
great great great movie....
RATING
10
Kumar OOO on 3rd Mar 2006, 8:38am | Permalink
I hoped the movie would be good...but it terribly disappointed me... Rang de basanti sucks big time !! All hindi movies suck !!!
RATING
2
Arpan on 18th Feb 2006, 3:26pm | Permalink
A great movie, in intent, execution, and spirit. The review does not do it justice though. While admiring the technical finesse of such a movie, allow the beautifully portrayed characters and the chemistry between them to work its magic on you. Give some quarter to the plot so that it may stir you... some thought to the cause behind it all so that you may feel the pain, the pride, and the glory... And as and when you do feel all of this, then take your pen and write so that others may know that a fine movie has been made, and that every young Indian must go see this one.
RATING
8
Sanjay on 16th Feb 2006, 5:32am | Permalink
~~Sensible Movie~~

To the Reviewers of this site: Would you mind using simple English and not abuse your Word/Pen power

two south indians show casing their talent in a movie with a high dose of north indian flavour...welcome to the evolution of the great "indian" cinema

Madhavan is born and brought up Jamshesdpur

Sidharth in delhi..how can you say they are south indians..but any way i like ur spirit..cheers mate

C'mon guys why are you fighting, never mind are they from south Or North, It doesn't matter, on the whole they are from India

RATING
10
Anju Thakral on 7th Feb 2006, 10:04pm | Permalink
this movie is amazing ,it shakes ur soul,but the controversy regarding abhijeet's mother is not gd the crew shud have invited her mother,frm where the story was picked up
RATING
10
Kali on 5th Feb 2006, 1:45pm | Permalink
This was directly hit on your face......One question which the director raises,What happened to our country which produced young fighters like Bhagat singh now it dosent have noteworthy youngsters to name and before we could give an excuse "we already have freedome"the second half follows with many more questions which hit straight on your face.Its a pity that also have people who watch the movie and write reviews that it was not entertaining.....huh...entertainment???....pity on people like that...
RATING
10
Deepti on 1st Feb 2006, 3:52pm | Permalink
Very poorly written review!!

I request u people to use less of uncommon English and concentrate more on reviewing rather than trying to "differently" review!!

ADVERTISEMENT
This page was tagged for
rang de basanti dialogue reviews
Rang De Basanti hindi movie
Rang De Basanti reviews
release date
Aamir Khan, Soha Ali Khan
Follow @fullhyderabad
Follow fullhyd.com on
About Hyderabad
The Hyderabad Community
Improve fullhyd.com
More
Our Other Local Guides
Our other sites
© Copyright 1999-2009 LRR Technologies (Hyderabad), Pvt Ltd. All rights reserved. fullhyd, fullhyderabad, Welcome To The Neighbourhood are trademarks of LRR Technologies (Hyderabad) Pvt Ltd. The textual, graphic, audio and audiovisual material in this site is protected by copyright law. You may not copy, distribute, or use this material except as necessary for your personal, non-commercial use. Any trademarks are the properties of their respective owners. More on Hyderabad, India. Jobs in Hyderabad.