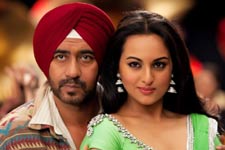 Ravi Kandala / fullhyd.com
EDITOR RATING
5.0
Performances
Script
Music/Soundtrack
Visuals
7.0
5.0
5.0
5.0
Suggestions
Can watch again
No
Good for kids
Yes
Good for dates
Yes
Wait to rent it
Yes
Clearly, Bollywood filmmakers need to watch more contemporary South films. Because all these directors in charge of these remakes seem to think that south-Indian films still consist of a mustachioed hero beating up tens of goons who go flying in the air the moment the hero twitches a finger.

Son of Sardar - the official remake of Maryada Ramanna - is yet another film that suffers from these grandiose visions of remake makers. In Telugu, Maryada Ramanna was a pleasant departure from the regular rut of beefcake films that pass off as mass entertainers. It was a gentle, offbeat movie built around a timid protagonist, and succeeded because of him. However, SoS takes Maryada Ramanna, sucks the essence out of it, and makes it yet another Rowdy Rathore.

Indeed, Son Of Sardar starts off with a fight sequence in which Devgn's pagdi (the pagdi!) beats up a goon and ties itself up.

We rest our case.

The film's story, as in the Telugu version, is essentially a one-liner. A Sardar, Jassi (Ajay Devgn) comes to the village of Phagwada to sell his inherited property, meets the village strongman Billu (Sanjay Dutt), who promises to help him make the deal, and takes him along to his home. What is later known is that Billu's uncle was killed by Jassi's dad, and that Billu has sworn to eliminate Jassi whenever he finds him.

The catch is that Billu considers his house a shrine of sorts, and will never harm a guest at home. Jassi finds this out and does everything he can to stay within its walls. He also falls in love with Billu's sister, Sukh (Sonakshi Sinha). How Jassi manages to come out of the house, stay alive and marry Sukh forms the remaining story.

Firstly, if you've seen the original, you will not fall in love with this one. The original was short, sweet, had songs integrated as part of the story, had super-emotional highs, and had a super-lovable protagonist who we loved and rooted for. The remake is long, loud, has songs that stick out like sore thumbs, has no real emotional peaks, and has a protagonist who we will never love or root for. So much for the amount spent on remake rights.

Any of us who have seen Maryada Ramanna will remember the sequence in which Sunil finally steps out of the house, for the outstanding background score and the tension that is built up for the scene. SOS effectively kills that scene by showing Ajay Devgn casually stepping out of the house and beating up the entire army of Sardars that is waiting to kill him. As we already said, so much for the amount spent on the remake rights.

Also, some of the one-liners work. Lines like "Tere aankh mein tears aur empty glass ke cheers, dono mujhe pasand nahi hai" and a few others bring out a hearty laugh. However, many others fall flat.

The performances are all fine. The leading men, Ajay Devgn and Sanjay Dutt, are in fine fettle, and manage to overdo their characters just enough. Sonakshi Sinha does what she does in Dabangg and Rowdy Rathore once again - she is no longer in danger of being typecast, since she already is typecast. The supporting cast sparkles, with Juhi Chawla deserving special mention. And it is nice to see Tanuja on screen.

The songs are okay to watch, but there's nothing that you will carry home. The screenplay of the movie is the biggest culprit - slackening all the time. This kind of a script requires a taut screenplay that keeps the audience guessing and at the edge of the seat always. However, Son Of Sardar moves along like a mountain in labour (to borrow a Sidhuism), and is not the edge-of-the-seat thriller it is supposed to be. Ashwani Dhir manages to get his comedy scenes right, but the emotional impact is missing. Where you are supposed to root for the protagonist, you'll mostly be found yawning.

SoS seems like it will be another of those flicks that critics term as mindless but that will anyway collect obscene amounts of money and be termed a hit. Not the best, but the Indian audience has long lowered its standards.
Share. Save. Connect.
Tweet
SON OF SARDAR SNAPSHOT 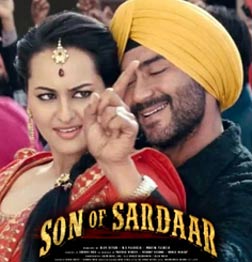 ADVERTISEMENT
This page was tagged for
son of sardar movie rating
Son Of Sardar hindi movie
Son Of Sardar reviews
release date
Ajay Devgn, Sonakshi Sinha
Follow @fullhyderabad
Follow fullhyd.com on
About Hyderabad
The Hyderabad Community
Improve fullhyd.com
More
Our Other Local Guides
Our other sites
© Copyright 1999-2009 LRR Technologies (Hyderabad), Pvt Ltd. All rights reserved. fullhyd, fullhyderabad, Welcome To The Neighbourhood are trademarks of LRR Technologies (Hyderabad) Pvt Ltd. The textual, graphic, audio and audiovisual material in this site is protected by copyright law. You may not copy, distribute, or use this material except as necessary for your personal, non-commercial use. Any trademarks are the properties of their respective owners. More on Hyderabad, India. Jobs in Hyderabad.