The Fast And The Furious Review 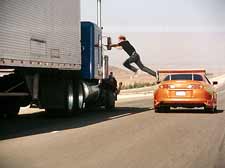 Smriti Kashyap / fullhyd.com
EDITOR RATING
7.0
Performances
Script
Music/Soundtrack
Visuals
NA
NA
NA
NA
Suggestions
Can watch again
NA
Good for kids
NA
Good for dates
NA
Wait to rent it
NA
The Fast And The Furious will not have you gone in 60 seconds from the theater if you are the sorts who can talk car and spare parts like the rest of us can talk nonsense, for it panders shamelessly to the auto fantasies of many a male. But even if you don't really have a fetish for fast streaking bolts of steel across the desert, don't fret, this flick may just convert you into one of 'em speedsters.

Zooming in at roughly 6000 miles per hour is rookie cop Brian (Paul Walker), who goes on an undercover mission to get to the heart of a couple of crimes around the LA area involving street racers. Brian manages to worm his way into the fast car-racing scene, and soon gets pally with the Czar Of The Cars, Dominic (a muscle-bound Van Diesel). And if there's a car the babe ain't too far, and Brian soon finds himself falling for Mia, Dominic's sister.

Another spoke in the wheel is Dominic's archrival Johnny Tran (Rick Yune), an Asian guy who makes Chinese torture seem like a game of checkers on a chilly day. Brian suspects Tran's hand behind the crimes, and like a faithful golden retriever, reports his findings to his superiors, who eventually pooh pooh it away thinking that his love for Mia could be preventing him from telling the truth.

Yup, this is the gossamer thin script that tacks the cars and the entire mad racing about in place. In a flick where everything is zipping past at 110 miles an hour, the last thing you want to do is be bogged down by some heavy-duty lines. Naah! Bring on the action!

The chariots all reek of sleek improvisations that make the Batmobile look like cat barf, and everyone who is anyone has nitrous oxide tanks under their bonnets with buttons in and around the steering wheel, souped up interiors and a sun roof which is the partner in almost all the crimes.

The expertly choreographed car mayhem will have you clutching at your seats in desperate anticipation and will certainly leave you panting for more; but after a couple of seconds the whole vroom vroom thing gets a bit taxing on the brain. The flick pumps up adrenaline expertly, accompanied by some testosterone induced alternative music. As the 4-wheelers rev it up and dash headlong into approaching trains, trailers and any other unfortunate objects on the highway, they give a whole new dimension to the term Speedy Gonzalez.

The movie is a mindless entertainer with a minimal plot, sub plots, text and sub text, and I am glad they made no bones about it. It ends on a high note - a morally dubious note, but a high one, none the same. It's one of those new age gimmicks, I guess, where you can commit any crime provided you have a half-baked philosophy to justify it. That's what happens here, with the hero walking into the sunset and the villain watering his radiator to drive home.

ADVERTISEMENT
This page was tagged for
The Fast And The Furious english movie
The Fast And The Furious reviews
release date
Vin Diesel, Paul Walker
theatres list
Follow @fullhyderabad
Follow fullhyd.com on
About Hyderabad
The Hyderabad Community
Improve fullhyd.com
More
Our Other Local Guides
Our other sites
© Copyright 1999-2009 LRR Technologies (Hyderabad), Pvt Ltd. All rights reserved. fullhyd, fullhyderabad, Welcome To The Neighbourhood are trademarks of LRR Technologies (Hyderabad) Pvt Ltd. The textual, graphic, audio and audiovisual material in this site is protected by copyright law. You may not copy, distribute, or use this material except as necessary for your personal, non-commercial use. Any trademarks are the properties of their respective owners. More on Hyderabad, India. Jobs in Hyderabad.