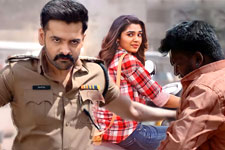 T J Reddy / fullhyd.com
EDITOR RATING
3.5
Performances
Script
Music/Soundtrack
Visuals
5.0
2.0
3.0
2.0
Suggestions
Can watch again
No
Good for kids
No
Good for dates
No
Wait for OTT
Yes
I've been watching films in theatres since 1993. I would have been a four-year-old at the time. My relationship with cinema is the longest-standing one I've had, and it is still going strong. You'd think I'd have had every unique cinema-going experience by now, but you'd be wrong. Trying to watch The Warriorr was a tribulation like never before.

Owing to a power failure at my local movie hall, I needed three attempts to watch the movie. I received two free tickets. I also watched one extra movie for no cost. But, we are not here to talk about the undercooked and underwhelming attempt that is The Gray Man. We are here to talk about another film that could reuse the same adjectives as descriptors.

The Warriorr (and why is it spelled like that), written and directed by N Lingusamy, is about a man. This man is a survivor, a fighter, a warrior who is also a doctor who becomes a police officer. Satya (Ram) is that unique individual. He has a doting mother, a pregnant sister, an annoying girlfriend, and a penchant for doing good deeds. Wow! My hero.

He gets posted to Kurnool's general hospital to carry out his good deeds as a doctor but is shocked to find the iron fist of Guru (Aadhi Pinisetty) rules the city. How will he accomplish his goals of saving all the lives of Kurnool with a powerful man killing everyone on the other side of the coin? He has no power, physical or political. He has no guile. He has no support from the local police. He has nothing going his way, and soon enough, Guru takes this hapless hospital-based hero to an inch of his life.

But leaving him alive was a mistake Guru would regret for all his days because Satya is a survivor. He is a fighter. He is a warriorr (with two Rs, lest anyone forget).

I chose to begin this review by recounting my experiences of getting to watch this movie as it gave me an interesting observation. I've been a regular cinema-goer for 28 years now, and the cinema-going experience has never before seen surprises in store for me. However, most of the movies playing on the big screen seem to have none.

I've often wondered if I could plagiarise individual paragraphs from my previous reviews of Telugu commercial cinema and create a new essay. Would anyone, including my editors, ever really know the difference? You'd think that would be unethical of me, but hey, aren't I learning from the stories created by our directors? The Warriorr, for example, is a Frankenstein's monster's Frankenstein monster. Or, as the narrator from Fight Club would say, it is a copy of a copy of a copy. If movies influence our thoughts and actions, as some critics would have you believe, I should be taking some clues and walking on the path most trodden.

Taking the path most trodden would also lead me to write a review for this film that would go along lines like this; story, routine screenplay, DSP music average, fights unrealistic, villain okay, and masala treat for fans. But what purpose does that serve in the grand scheme of things apart from making my life easier? Maybe the path of least resistance is the way to go as I get older. I'm starting to see greys in my hair, and I don't know if I need to attribute them to the aging process or overthinking underwritten movies every week.

However, our Tollywood heroes seem better-looking as the years go on. Ram still looks great, seems to have picked up some sweet dance moves, and does some voice modulation that is genuinely admirable. It also helps that our "heroes" get older, but the heroines seem to stay the same age. This phenomenon also helps our writers; they never have to think too hard when writing a female lead. If the women never grow up, we never have to create new characters for them. The ditzy female romantic interest archetype is as superficially ageless as our male leads.

The one dim light in a sea of darkness is Aadhi Pinisetty's performance as Guru. He is no different than your run-of-the-mill evil guy. However, the air of importance around him is solely a product of the actor. It is the equivalent of a Cheteshwar Pujara 200-ball, half-century in a losing effort for his team. Fight as he might; the outcome is never in doubt.

We say that because the writing, the music, the cinematography, the visual effects, the lighting, the color grading, and so many other areas are so flat that the film's visual and auditory language rarely elevate it from a decently produced TV serial. When everyone in a team goes through the motions, it becomes an average and unremarkable day at the office.

Instead of wallowing in the apathy, I would like to talk about some nice things before we wind up. Firstly, the most memorable scene in the film involves a kidnap and a doctor's use of the placebo effect to great success. A clever set-piece that doubly works as a show of character strengths and weaknesses. Secondly, the piano hook for the song Dhada Dhada is simple, cute, and quite effective.

To finish it on a three, I would stop complaining about this film and aiding my hair in its greying. Ram is hung on to this youth quite well, and I would like to do the same. If there is a limit to a writer/director's creativity, there needs to be a limit to my endless descent into the abyss of disappointment.
Share. Save. Connect.
Tweet
THE WARRIORR SNAPSHOT 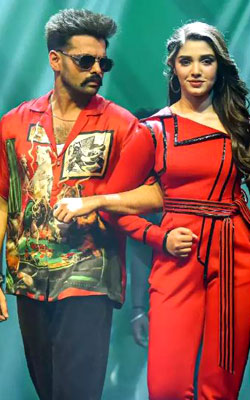 See The Warriorr full details
THE WARRIORR USER REVIEWS
1 - 1 OF 1 COMMENTS
POSITIVE  |  NEGATIVE  |  NEWEST  |  OLDEST  |  MOST HELPFUL  |  LEAST HELPFUL
Lahari on 24th Jul 2022, 5:25pm | Permalink
Screenplay is not part of the visual aspect of the movie. Screenplay simply means the movie script. It's not the 'play on the screen' as irritatingly misunderstood by our movie reviewers. So you can't say music is good, screenplay is good etc. Everything a movie is, is part of the screenplay or without screenplay a movie can't be made.
TJ Reddy on 25th Jul 2022, 3:20pm | Permalink
Hello Lahari

I understand where you're coming from. There are two versions of a script that are written. One is the spec script, which forms the basic story and flow of things. It is what you can usually read.

The other is called a shooting script. This version has camera angles, editing choices, sound cues, and many other aspects written into it. It is a roadmap of how a film would look in its final stage. This is usually compared with dailies to check the progress of a film as well. A well-run production would operate this way.

So when I say the script is a part of the visual language of the film, it includes these aspects. There definitely might be a slight bit of cognitive dissonance when I don't specify this exactly and that point is well taken.

ADVERTISEMENT
This page was tagged for
The Warriorr telugu movie
The Warriorr reviews
release date
Ram Pothineni, Aadhi Pinisetty
theatres list
Follow @fullhyderabad
Follow fullhyd.com on
About Hyderabad
The Hyderabad Community
Improve fullhyd.com
More
Our Other Local Guides
Our other sites
© Copyright 1999-2009 LRR Technologies (Hyderabad), Pvt Ltd. All rights reserved. fullhyd, fullhyderabad, Welcome To The Neighbourhood are trademarks of LRR Technologies (Hyderabad) Pvt Ltd. The textual, graphic, audio and audiovisual material in this site is protected by copyright law. You may not copy, distribute, or use this material except as necessary for your personal, non-commercial use. Any trademarks are the properties of their respective owners. More on Hyderabad, India. Jobs in Hyderabad.