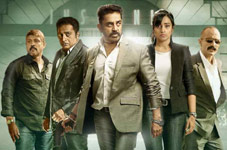 Ravi Kandala / fullhyd.com
EDITOR RATING
7.0
Performances
Script
Music/Soundtrack
Visuals
7.5
7.5
7.5
7.5
Suggestions
Can watch again
No
Good for kids
No
Good for dates
No
Wait for OTT
No
So Trisha and Kamal Hassan get into a fight in Cheekati Rajyam. Not the silly verbal argument between a hero and a heroine. Not the slap-slap shown in juvenile films. Not the silent war between husband and wife. This is an actual fight wherein Trisha shows off a manic gleam in her eyes when she spots a weakness in her opponent and starts kicking him where he's been kicked already. A fight where Trisha is picked up and banged down on a table twice or thrice. And then she stands up again ready to give and take a few knocks more. She does spoil it lightly by striking a funny Karate-type stance, but it is nevertheless good to see a female character get that kind of footage in a Telugu film.

That the film is backed by the man constantly trying to take Indian cinema to the next level is no coincidence. Kamal Hassan returns, this time with a thriller about events that unfold over a single night. They could've unfolded over the two-hour runtime of the film for all you know - that is how taut the film is.

Hassan plays the role of Diwakar, a police officer gone bad. Diwakar and his partner Mani (Yugi Sethu) steal a consignment of cocaine from a couple of drug runners. Before they can sell it off for profit, Diwakar's son is kidnapped by Vithal Rao (Prakash Raj) - the cocaine was supposed to reach Rao originally. Vithal asks Diwakar to get the cocaine to his nightclub and take his son back. Diwakar reaches the night club with the cocaine, but so do two other police officers (Trisha and Kishore). Pedababu (Sampath) who is supposed to procure the drugs from Vithal also reaches the club. The ensuing events in the club form the remaining part of Cheekati Rajyam.

Cheekati Rajyam takes off from the first scene and never stops. Right from Hassan sewing up his knife wound to making breakfast, everything proceeds at breakneck speed in the first half. The second half slows down slightly, but that is more because the film plays out nearly in real time. The lack of twists and Hassan's surprising inclination to show himself as the good guy takes away some of the sheen, but these are minor niggles.

The film is superbly shot - setting an entire movie inside a nightclub for two hours is quite risky as audiences are easily fatigued by repetition of locations, and Cheekati Rajyam is up to the task. From the fights in the cramped kitchen to the changes in background music in different parts of the club, there is not a single beat that is missed through the length of Cheekati Rajyam.

Performances-wise, Kamal Hassan takes the cake and the bakery, of course. The age on the man shows and Kamal uses it gracefully. From getting his behind kicked by Trisha to wincing in pain every time the wound on his stomach plays up, the man delivers a performance that is pure gold. Trisha, Prakash Raj, Madhu Shalini, Kishore, Sampath and Yugi Sethu, too, put in credible acts and take the film forward.

The film is technically up there. The action sequences are wonderfully choreographed. Everything in sight is used as a weapon, and the lack of space to take hearty swings at opponents keeps the action compact and believable. The background score is good, too.

Cheekati Rajyam is a dark little film with no subplots or entertainment just for the sake of it. The ending hints at a franchise with inspectors Diwakar and Mallika (Trisha) - bring it on, we say!
Share. Save. Connect.
Tweet
CHEEKATI RAAJYAM SNAPSHOT 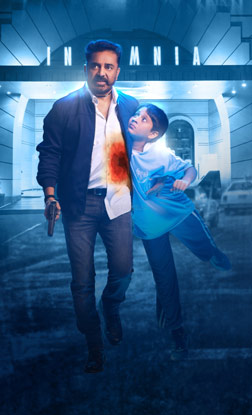 ADVERTISEMENT
This page was tagged for
Cheekati Raajyam telugu movie
Cheekati Raajyam reviews
release date
Kamal Hassan, Trisha
theatres list
Follow @fullhyderabad
Follow fullhyd.com on
About Hyderabad
The Hyderabad Community
Improve fullhyd.com
More
Our Other Local Guides
Our other sites
© Copyright 1999-2009 LRR Technologies (Hyderabad), Pvt Ltd. All rights reserved. fullhyd, fullhyderabad, Welcome To The Neighbourhood are trademarks of LRR Technologies (Hyderabad) Pvt Ltd. The textual, graphic, audio and audiovisual material in this site is protected by copyright law. You may not copy, distribute, or use this material except as necessary for your personal, non-commercial use. Any trademarks are the properties of their respective owners. More on Hyderabad, India. Jobs in Hyderabad.