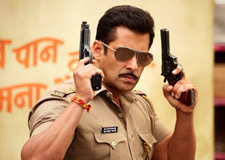 Samrat Sharma / fullhyd.com
EDITOR RATING
7.0
Performances
Script
Music/Soundtrack
Visuals
8.5
5.5
5.0
7.0
Suggestions
Can watch again
No
Good for kids
No
Good for dates
No
Wait to rent it
Yes
70s masala aesthetic, paisa wasool, leave your brains at home, entertainment â€" there will be a lot of apologies like these thrown at Dabangg 2, the preserve of films that are lacking somewhat and yet must be apologized for, because you like certain things about it, but not the whole.

In this case, you like Salman Khan and not much else. It's a sequel to a film with unique aesthetic created (and owing much to Telugu cinema) by Abhinav Kashyap, with nary a sign of him and his interesting voice. This is all the masala bits, and masala bits only, ramped up to eleven, with none of the emotional hooks, cleverness in writing or a unique understanding of and viewpoint on, hinterland UP.

Moving the action to Kanpur doesn't help â€" it's not rural UP, but it's still not Bombay. Newcomer director Arbaaz Khan does not know Kanpur like Kashyap knew the fictional Lalganj; he doesn't pay as much lavish attention to minor details of the language and set design as the first film. This is not a unique film; this is the same old same old, starring Salman Khan as Chulbul Pandey.

Chulbul Pandey, of course, is the highlight of the film. The father-son drama, and the romance with the headstrong potter-woman from the first film, both take a back seat to celebrating Pandey as the ultimate man â€" moustache and all. All attention is paid to hero moments and potential whistle inducing beats, everything else falling to the wayside as Arbaaz Khan mercilessly creates a stew only with beef.

Salman Khan takes this all in his stride, perfecting his Chulbul-isms, being alternatively goofy and po-faced as the moment requires, and never failing to show us one beneath the other. Some of his most enjoyable moments come when squaring off against Prakash Raj and Deepak Dobriyal.

The plot is as predictable as they come: corruption, evil, and a cop facing all this alone. However, both Raj and Dobriyal sell the evil, in as much as evil needs selling in a film like this. The writing isn't especially clever or original, but the action is often inventive and almost always cool.

Selling the cool is the man of the hour, and his presence elevates the pedestrian songs, and the lackluster dialogues, and makes phenomenal the already solid action. Watching the film just for Salman is something a lot of fans will do and he makes sure they get their money's worth.

This is an enjoyable film, overall, too. It's just very rote and very run of the mill. It isn't focused like the first one was, and it doesn't bring anything new to the table. Instead, it eschews all that made the first one so special for a fast paced action film and showcasing the talents of one S Khan. This is like a lean meal without the vegetables and the carbs â€" it's fine, but it ain't tasty.
Share. Save. Connect.
Tweet
DABANGG 2 SNAPSHOT 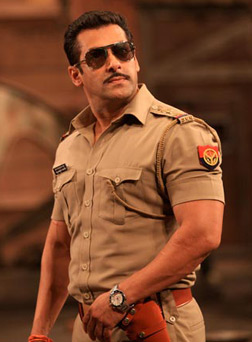 ADVERTISEMENT
This page was tagged for
dabangg 2 review full hyderabad
dabang 2 good for kids
fullhyd dabang
Dabhang 2 moovie is good ya no
dabaang 2reviews
Follow @fullhyderabad
Follow fullhyd.com on
About Hyderabad
The Hyderabad Community
Improve fullhyd.com
More
Our Other Local Guides
Our other sites
© Copyright 1999-2009 LRR Technologies (Hyderabad), Pvt Ltd. All rights reserved. fullhyd, fullhyderabad, Welcome To The Neighbourhood are trademarks of LRR Technologies (Hyderabad) Pvt Ltd. The textual, graphic, audio and audiovisual material in this site is protected by copyright law. You may not copy, distribute, or use this material except as necessary for your personal, non-commercial use. Any trademarks are the properties of their respective owners. More on Hyderabad, India. Jobs in Hyderabad.